Greetings from The 88 Project! We bring you news, analysis, and actions regarding human rights and civil society in Vietnam during the week of October 5-11. On October 6, the Ministry of Public Security, in collaboration with Ho Chi Minh City and Hanoi police, arrested dissident writer Pham Doan Trang— a few hours after the United States and Vietnam held their annual human rights dialogue. International coverage of the event dominated the news cycle this week, and many human rights organizations and civil society groups released statements condemning the arrest. Nguyen Van Hoa’s sister was prohibited from visiting him in prison. And a group of Israeli educators are standing in solidarity with political prisoner Nguyen Nang Tinh. In the news and analysis section, read reflections on Pham Doan Trang and her legacy. And take action for her by sharing an urgent appeal on her behalf and the letter highlighting her desires while she is in prison. 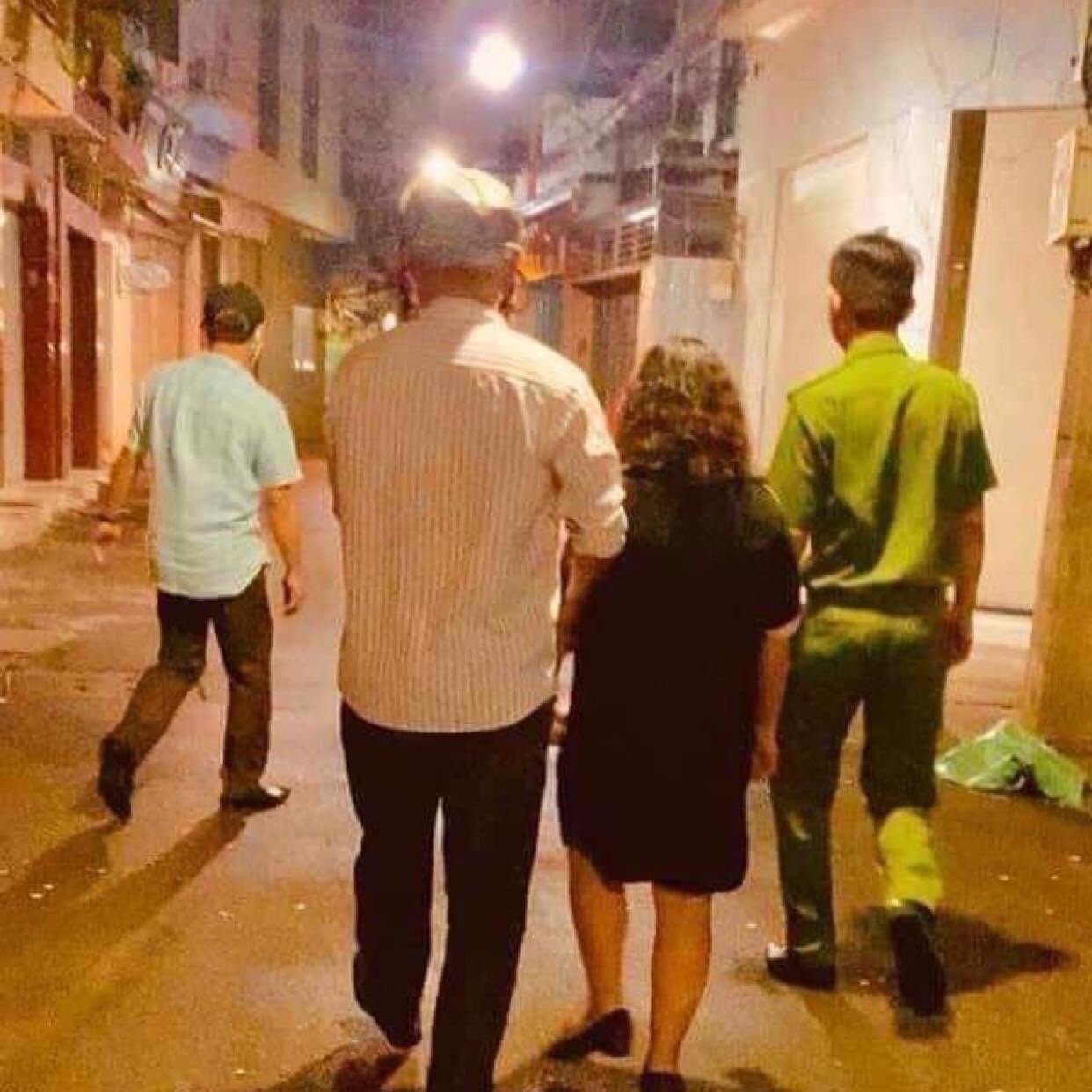 Pham Doan Trang during her October 6, 2020 arrest. Source: Will Nguyen

On October 6, 2020, the US and Vietnam held their 24th annual Human Rights Dialogue via virtual sessions. According to the State Department’s website, “The three-hour Dialogue addressed a wide range of human rights issues, including the importance of continued progress and bilateral cooperation on the rule of law, freedom of expression and association, religious freedom, and labor rights.… The promotion of human rights and fundamental freedoms remains a critical pillar of U.S. foreign policy and is key to further building upon the U.S.-Vietnam Comprehensive Partnership.”

However, no sooner had the meeting concluded than Vietnam demonstrated how far those important objectives were from being achieved. Around 11:30pm that evening Ho Chi Minh City Police, in coordination with Hanoi Police and the Ministry of Public Security, arrested prominent journalist Pham Thi Doan Trang in Ho Chi Minh City and charged her with anti-state propaganda under Article 88 of the 1999 Criminal Code.

Doan Trang has long written on the issues of democracy and free elections, is a co-founder of the Liberal Publishing House, and has recently reported on the recent Dong Tam raid and trial. She is being held in pre-trial incommunicado detention in Hoa Lo Prison in Hanoi. Read our updates on her background and arrest here.

Also read “They Will Be Here In 5 Minutes,” a reflection by Trang (also translated into English),  which she wrote ahead of her March 2018 detention on International Women’s Day. And follow this account for regular updates on her case.

Nguyen Van Hoa’s sister went to An Diem Prison to see Hoa and give him some items. She was told that she couldn’t see him or give him anything because Hoa had been refusing to wear prison clothes. He also recently wrote a petition asking to be transferred to a prison camp that is closer to his home. Hoa is a blogger serving seven years in prison; while imprisoned, he has faced a myriad of mistreatment, including solitary confinement and physical abuse.

The Czech Foreign Minister also called for the immediate release of Pham Doan Trang, a recipient of the Czech Republic’s 2017 Homo Homini Award. See what actions you can take to support her in the “Take Action” section below.

Twenty Israeli educators also wrote a letter calling for the release of music teacher Nguyen Nang Tinh, who was sentenced to 11 years in prison in May 2019. “We, the undersigned educators in music and musicology studies throughout the State of Israel, ask you to use the close ties between the Israeli Ministry of Defense and the communist regime in Vietnam and request the immediate release of our colleague, political detainee Nguyen Nang Tinh. Music and freedom are inextricably linked, as illustrated by Leonard Bernstein on December 25, 1989, when he conducted Beethoven’s Ninth Symphony as part of the celebrations of the fall of the Berlin Wall.”

A dissident jailed in Vietnam shares her message: Don’t free me, free my country, The Washington Post Editorial Staff, October 8, 2020: “In her letter, Ms. Trang recalled Vietnam’s practice of jailing dissidents, then releasing them under conditions of immediate expulsion, as with Nguyen Ngoc Nhu Quynh, the blogger known as Mother Mushroom, who was released from a Vietnamese jail and expelled to the United States in 2018. Ms. Trang rejected that fate. ‘Focus less on freeing me,’ she wrote, and more on advancing her cause, including ‘free and fair elections.’ These are the words of a selfless and courageous champion of democracy.”

Vietnam’s Arrest of a ‘Modern Legend’, Asia Sentinel, October 9, 2020: “She is a will of the wisp, a slight, soft-spoken woman with a guitar and a mission, who travels the length of Vietnam to talk about democracy and political decency. Politics for the People, a book Trang wrote a few years back to explain basic concepts of participatory democracy, is hugely popular among young Vietnamese; they photocopy it and pass it from friend to friend. The book doesn’t preach revolution, exactly. With examples immediately relevant to Vietnamese readers, it explains how to exercise the rights that their nation’s constitution accords them.”

Share Front Line Defenders’s urgent appeal for Pham Doan Trang on your social media or by sending it to your government representatives. Please also widely circulate the letter she wrote prior to her arrest, which details her wishes for the country and elaborates on what the public should do while she is in prison. Follow this account for regular updates on her case; any fundraising appeals will be posted here in the future.