Trinh Ba Khiem, Tu's father, said his son has been on a hunger strike for the past 20 days at Cham Mat Detention Center in Hoa Binh to protest against mistreatment in prison. Khiem traveled to Cham Mat to try to get more information, but to no avail. When he arrived, prison officials threatened Khiem and would not even let him speak with his son over the phone. On August 28, Khiem went with several villagers from Duong Noi Village to the Police Inspector Office in Hanoi to ask to make a call to his son to verify if he was still alive. The request was denied; Khiem was instead told to make a visitation request with the Hoa Binh provincial Inspector’s Office; however, Khiem had just come from Hoa Binh.

The family fears that Tu’s health is in danger. Khiem and former political prisoner Tran Thi Nga believe that prison officials may have tortured Tu to make him confess to the charges against him, and thus he went on a hunger strike in protest. “Those who are locked up in closed cells have no ways left to them to resist and preserve their life. The only thing left to them is to go on hunger strike, and this may be that last step that Trinh Ba Tu has had to take,” Nga told Radio Free Asia.

The family still has not been able to obtain information about the status of Tu, who was reported to be on a hunger strike, despite numerous attempts by his father, Trinh Ba Khiem, to learn more about his situation.

In a video clip made before he was arrested, Trinh Ba Tu reiterated that he only protested peacefully and lawfully against what he and fellow Duong Noi residents perceived as an illegal land grab in 2008 by the government in collusion with businesses. In anticipation of potential torture in captivity, he declared that anything that he might say or sign to the contrary should be regarded as forced and not coming from him. He also asked that should he die in captivity that his body must not be cremated but independently examined to determine the true cause of death.

Along with his family members, Tu is a vocal activist on land rights and democracy issues.

Tu is a son of former political prisoners Trinh Ba Khiem and Can Thi Theu, two prominent activists who participated during the land protests of Duong Noi farmers in Duong Noi District, Ha Dong Ward, Ha Noi. In 2008, the authorities released an announcement on land acquisition in Duong Noi village and the compensation price, which was extremely low. There were 356 households who refused compensation and together participated in a prolonged protest.

In 2014, his parents, Khiem and Theu, were both arrested and sentenced to 18 and 15 months, respectively while filming land-grabbing on April 25, 2014. The authorities accused them, along with some other Duong Noi petitioners (Dan Oan) of “resisting against the person on duty.” After her release on July 25, 2015, his mother continued her activism for land rights and was arrested for the second time on June 10, 2016. Theu and more than 50 Duong Noi petitioners gathered in the Ministry of Natural Resources and Environment and requested the administrative agencies solve their land issues. Public security officers arrested her and sentenced her to 20 months in jail for “disturbing public order.”

Phuong, along with his younger brother Trinh Ba Phuong, has called for his parents’ release and has accompanied Duong Noi petitioners in seeking justice.

One of the most serious incidents that Tu has suffered from was on June 25, 2015. On that day, Tu and other 40 people came to pick up his father, Trinh Ba Khiem, at Detention Center No 6, Thanh Chuong District, Nghe An Province. When they were on the way back, around 50 police in plainclothes of Nghe An Province traced their cars and attacked the people for 10 minutes at 5:00 pm.

Tu was among the most beaten. The attack was so harsh that it caused Tu to have a serious left eye injury. He then had to undergo two eye surgeries. Currently, the sight of in his right eye is reduced to 6/10, according to an examination result 15 months after the incident.

On September 20, 2016, Tu went to attend his mother’s trial at the People’s Court of Dong Da Ward, Hanoi, at 7:30 am. At that time, there were also around 40 petitioners (Dan Oan) supporting Can Thi Theu with posters.

When Tu and some attendants were livestreaming on Facebook, a group of 30 security officers arrested them and took to Public Security Agency of Hanoi, No 6, Quang Trung Street, Ha Dong Ward. Police beat Tu continuously during the arrest and transfer and also threaten him and his family to death. Other detainees, especially Pham The Dung, also suffered severely under the attack. They finally released Tu sat 4:00 pm on the same day.

Tu is the second eldest son of well-known land rights activists Can Thi Theu and Trinh Ba Khiem, who started their activism in 2011. His brother, Trinh Ba Phuong, is also a vocal activist on land rights issues.

January 10, 2020: surveilled in the aftermath of the Dong Tam raid

On January 9, 2020, a massive police force stormed into Dong Tam commune and violently assaulted and detained citizens, as well as killed community leader Le Dinh Kinh. The area is home to a longstanding land conflict. In the aftermath of the raid, Trinh Ba Tu and his brother Trinh Ba Phuong reported on the incident and advocated for affected locals.

Tu was under surveillance and was also prohibited from leaving his home to attend Le Dinh Kinh’s funeral. 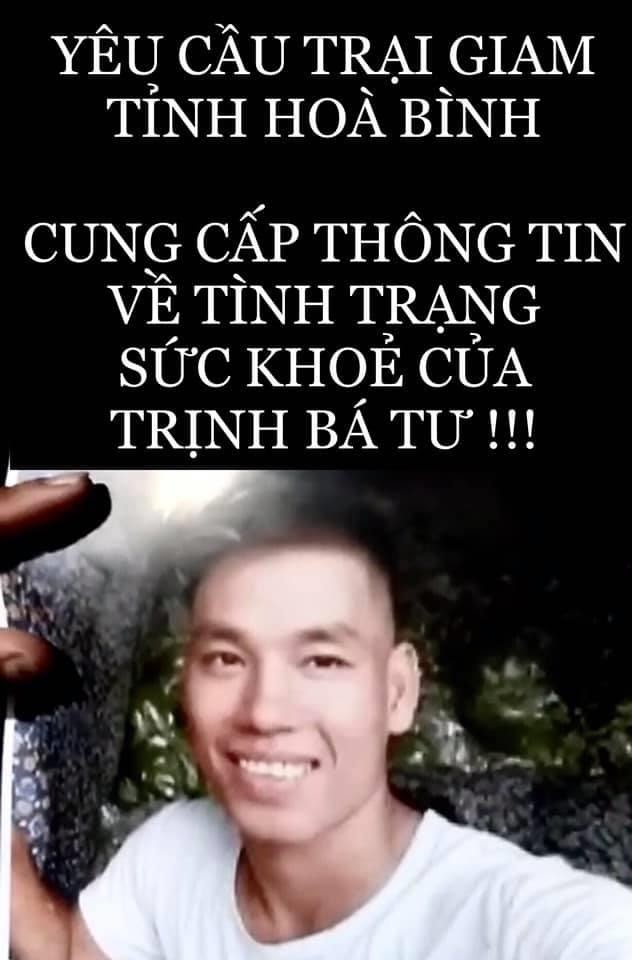