Trinh Ba Khiem is a farmer in Duong Noi Ward, Ha Dong District, Ha Noi. In 2014, when the government decided to use coercive methods to seize farmers’ lands at Duong Noi, he strongly objected to the authorities and became an activist in the land rights and democracy movements.

In 2014, when striving against the coercive move of government in taking farmers’ land in Duong Noi, Trinh Ba Khiem and his wife Can Thi Theu were arrested and imprisoned for obstructing justice. He was released on June 25, 2015.

He often provides support to political prisoners. In 2019, he was beaten on his way to visit the prisoners at the Thanh Chuong 6 Prison.

He lives with his wife, Can Thi Theu, who is also an activist.

In 2014, when striving against the coercive move of government in taking farmers’ land in Duong Noi, Trinh Ba Khiem and his wife Can Thi Theu were arrested and imprisoned for obstructing justice. He was released on June 25, 2015. His wife, Can Thi Theu, was sentenced to 12 months under for the same charge. 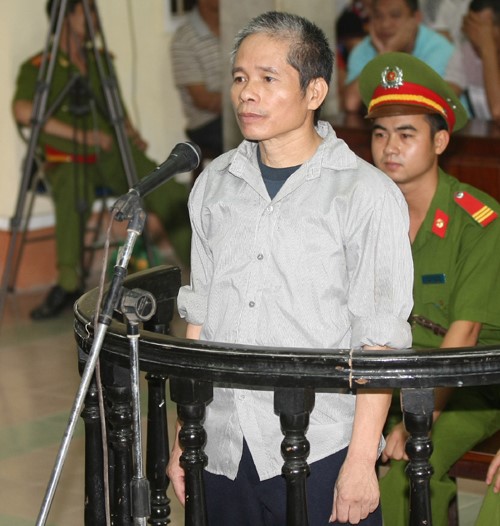 On July 12, 2019, Trinh Ba Khiem and 19 family members and supporters of political prisoners were physically attacked by thugs who they believed to be plain-clothes prison officers and public security officers. Activist Trinh Ba Phuong told VOA Vietnamese that the group was on its way to Prison No. 6 with some posters solely to visit and support prisoners such as Truong Minh Duc, who were on hunger strike at the time. When the visitor group tried to approach Camp 6 by car, a truck seemed to purposely park to block the road, so they decided to walk the rest of the way. This is where the attack took place. Activists Nguyen Thuy Hanh, Huynh Ngoc Chenh, and himself were not only physically assaulted, but their belongings, including money, phones, and personal documents, were taken by the attackers.

March 21, 2021: interrogated by police about livestreams

Police in Hanoi summoned Khiem for questioning and also demanded he removed some livestreams that they claim defame the state.

Khiem told Radio Free Asia after the incident that: "My wife and children are already in prison, so I’m not frightened at all, even if they jail me for 20 years or if I die in prison."