From 2008 onwards, through his blog, and later his personal Facebook page, Huynh Ngoc Chenh has written many posts to express his concerns about the Vietnamese regime. His posts denounce human rights violations, poor economic conditions and political management, and weak reactions of the Vietnamese regime against Chinese provocation.

In January 2013, Huynh Ngoc Chenh and 71 other people signed a petition, which was sent to the National Assembly of Vietnam, to ask for a democratic transition. The petition was called Petition 72.

In 2013, Huynh Ngoc Chenh was given the Netizen of the Year 2013 award by Reporters Without Borders. Two months later, he was prevented from leaving his residence by customs officers.

On May 10, 2016, he was detained until midnight by security officers after protesting against environmental pollution occuring in Vietnam at that time.

On July 12, 2019, he was badly beaten on his way to go to visit the prisoners at Thanh Chuong 6 Prison, Nghe An province.

He lives with his wife, who also an activist, Nguyen Thuy Hanh.

On July 12, 2019, Huynh Ngoc Chenh and 19 family members and supporters of political prisoners were physically attacked by thugs who they believed to be plain-clothes prison officers and public security officers. Activist Trinh Ba Phuong, son of former political prisoner Can Thi Theu, told VOA Vietnamese that the group was on its way to Prison No. 6 with some posters solely to visit and support prisoners such as Truong Minh Duc, who were on hunger strike at the time. When the visitors group tried to approach Camp 6 by car, a truck seemed to purposely park to block the road, so they decided to walk the rest of the way. This is where the attack took place. Activists Trinh Ba Khiem, Nguyen Thuy Hanh and Huynh Ngoc Chenh were not only physically assaulted, but their belongings-- including money, phones, and personal documents-- were taken by the attackers. 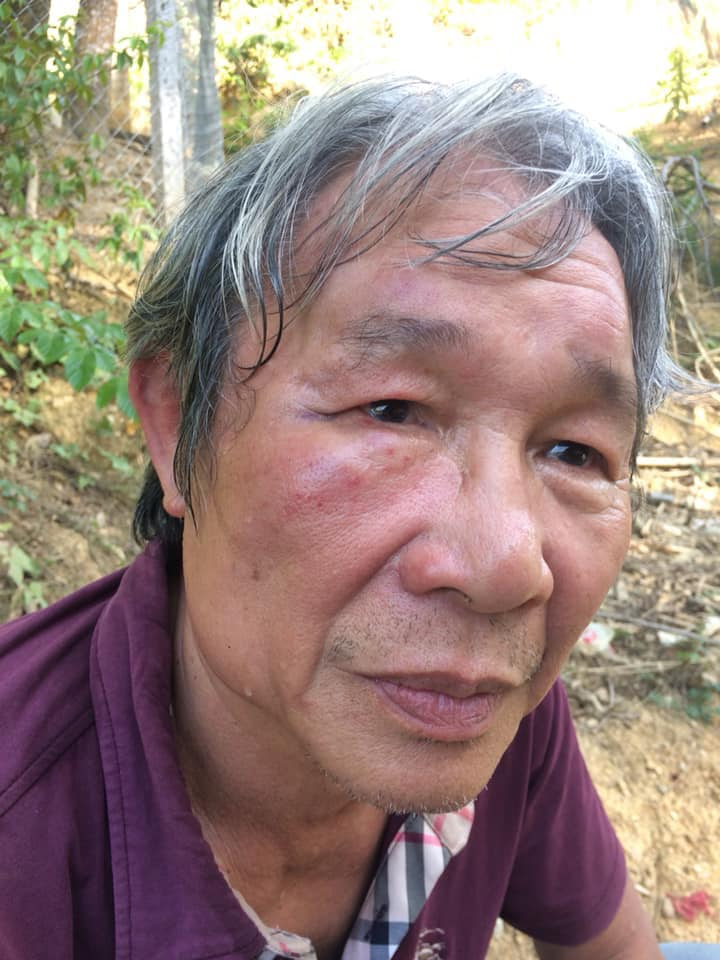 Huynh Ngoc Chenh after the attack

January, 2020: surveiled in the aftermath of the Dong Tam raid

On January 9, 2020, a massive police force stormed into Dong Tam commune and violently assaulted and detained citizens, as well as killed community leader Le Dinh Kinh. The area is home to a longstanding land conflict. In the aftermath of the raid, authorities targeted local activists who reported on the incident and advocated for affected locals.

Huynn Ngoc Chenh and his wife Nguyen Thuy Hanh have been under surveillance and were also prohibited from leaving their home to attend Le Dinh Kinh’s funeral.

Huynh Ngoc Chenh’s Facebook account has been constantly attacked using the community standards mechanism of Facebook. Since April, Facebook suspended his account for an entire month just because of the posts concerning the arrest of his wife, Nguyen Thuy Hanh. Recently, his account was suspended for another month with no reason given.

The incidents happened in the context that Facebook agreed to become involved more in the censorship efforts of the Vietnamese government.