On July 12, 2019, a group of 25 family members and supporters of political prisoners was physically attacked by thugs, who they believe were plainclothes prison officers and public security officers. The group was on its way to Prison Camp 6 in Nghe An province with some posters solely to visit and support prisoners on hunger strike, yet all of them were assaulted, and several of them had their belongings and papers robbed, while police officers looked the other way. The group included senior citizens and children, yet nobody was spared from the beatings. Even Ms Nguyen Kim Thanh, wife of political prisoner Truong Minh Duc, who went to prison to visit her husband after she underwent a serious surgery, was also assaulted. A detailed report is available on Defend the Defenders here. Some footage of the attacked can be seen on Trinh Ba Phuong’s Facebook.

Ms Nguyen Thuy Hanh, one of the victims of this incident, wrote this testimony after friends urged her to do so. Her husband, Huynh Ngoc Chenh, was among those most seriously beaten. Her testimony is a comprehensive report of this serious incident in a victim’s own words.

I didn’t intend to tell this story. I don’t even want to remember it. But friends urged me to tell it.

At 5:00 a.m. that morning, we started our trip to Prison Camp #6 from Hanoi. There were 9 of us, but we decided to rent a 15-seat car since Ms Thanh, wife of prisoner of conscience Truong Minh Duc, also joined us. She just had a major surgery 12 days prior. She was still weak and in a lot of pain, so we thought it was best for her to lie down and rest. We took Ms. Thanh to the prison camp to visit her husband, who went on a hunger strike on June 29th.

Around 1 p.m., when we were about two km away from Camp 6, we saw a truck without any license plate obstructing the road. We knew right away that our trip was divulged and someone must have informed the local authorities, who blocked the way to prevent our visit. We had no other choice but to get out of the car, rent a motorbike, and send Vu Hung to go with Thanh to complete all the procedures to visit her husband.

At the same time, our friends from Nghe An and Ms. Minh and Mr. Loi, the parents of political prisoner Nguyen Dang Minh Man, arrived in two other cars. The group, comprising of 25 people, merged, took some pictures, and walked to the camp.

After only 300 meters, we saw in front of us a group of men and women, looking fierce, marching toward us with clubs and helmets in their hands.

They came near us, and asked contemptuously :

“Don’t go any further,” they shouted.

I went to the front and asked: “Who are you to have the right to stop us?”

The man wearing a blue shirt slapped me in the face. However, he could not stop me. Chenh, Ms. Hoang Ha,  and I jostled them out of the way to walk to the camp. But they still followed us.

When two groups were quarreling, two uniformed policemen on a  motorbike coming from the prison passed by. I told them:

“Officers, please intervene and handle these people according to the law. They are stopping us in the middle of the road for no reason”

The officers stared at us and nonchalantly returned to the camp.

The three of us passed through the thugs, but the whole group was still blocked on the other side by the thugs, so we had to return to the group.

Suddenly, the man in the blue shirt who previously slapped me immediately rushed towards Mr. Chenh, followed by his group. I could not forget that scene. They looked like a pack of hungry wolves attacking a human. They punched and kicked Chenh repeatedly while swearing and cursing, even when he had already fallen down onto the road. Instinctively, I rushed to pull them away from Chenh and shielded him. They turned to me, pulled me out, and threw me into a ditch. They then continued to attack Mr Chenh. The violent situation at that time made me unaware of the surroundings. Later, I heard that Nguyen Binh and Hoang Ha, who voiced their objections against the beating, and Phuong Luu, who tried to stop them from beating me, were all three beaten as well. Mr. Truong Dung was hurt; Mr. Trinh Ba Khiem, Mrs. Cuu, and Mrs. Minh and Mr. Loi were also beaten.

The thugs were able to corner and force us to pull back to a distance. Then, unexpectedly and forcefully, they took our wallets and continued to beat Mr. Chenh. I tried to  help Chenh, but could not do anything, because they were so crowded and fierce. They beat me and pulled me out.

This time they completely pushed everyone back. Only Chenh refused to leave and requested them to return the stolen wallets since it contained all of his personal papers, licenses, and also payment cards of both my husband and me. So, they kept on beating him.

Under the blazing sun, the thugs violently escorted the group, including elderly citizens, youth, and even children, all without hats, for a few kilometers. No one was spared from their beatings. Everyone had been abused.

I walked, and my mind was on fire. I feared for Chenh’s safety; he was left alone with those savages.

“I am so worried about Chenh!” I whispered to a woman I thought was from Nghe An’s group.

“F*** you, you motherf*****, keep going.” Dirty words came from a dirty mouth. I soon realized she was one of the attackers.

At that time, a man on motorbike dropped off Mr. Chenh and left. All our money and papers were gone.

Trinh Ba Khiem, a former prisoner who had served his sentence in Prison No.6, recognized that among the thugs assaulting us, there was a criminal prisoner with a sentence of 20 years of imprisonment, and also some prison wards. Those officers finally took off their uniforms to reveal their true nature.

Meanwhile, a group of activists from Saigon, including Ms. Duong Thi Tan, Ms. Thap – wife of the political prisoner Luu Van Vinh, and Ms. Chau – wife of political prisoner Nguyen Ngoc Anh, were able to enter the camp. We tried but were unable to contact them. Ms. Tan bravely got through the thugs to inform us about the situation inside the camp, but she was also severely beaten.

After that, I was able to contact Ms. Thanh. Not only did the authorities in the camp cruelly deny her right to visit her husband, but she herself was also violently assaulted and had some injuries, and her phone was crushed. Vu Hung was seriously beaten like Chenh.  Chau and Thap were also assaulted. Not only was Chau beaten, but her phone was also stolen. Plainclothes thugs then stopped a car on the road and escorted four of them to Vinh International airport.

We agreed to reunite at Do Luong crossroad. We hugged each other, feeling both sad and happy, and each was on his/her own way; some stayed in Nghe An, some returned to Hanoi.

All of us, especially Huynh Ngoc Chenh and Vu Hung, the two most severely beaten individuals, during and after this event, neither feel afraid nor the physical pain, but only disgusted at those who are mistreating our brothers in prison and ordering thugs to wrongly prevent friends and families from visiting the prisoners.

By assaulting us, the communist authorities once again removed the “democratic freedom” mask that they are trying to use to conceal their brutal barbarism against our people from the progressive, outside human world.

Suppression only makes us more courageous and united. They are the ones who are failing by playing this dirty game. 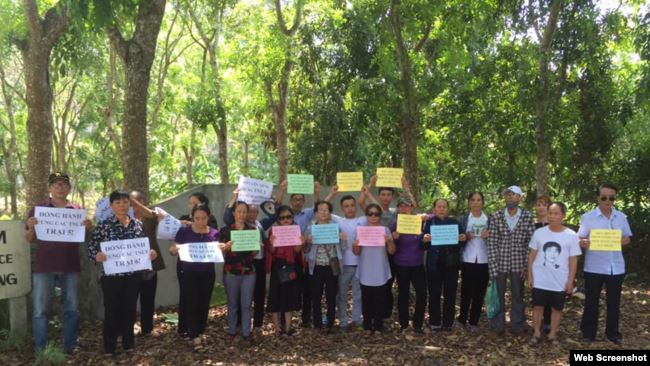 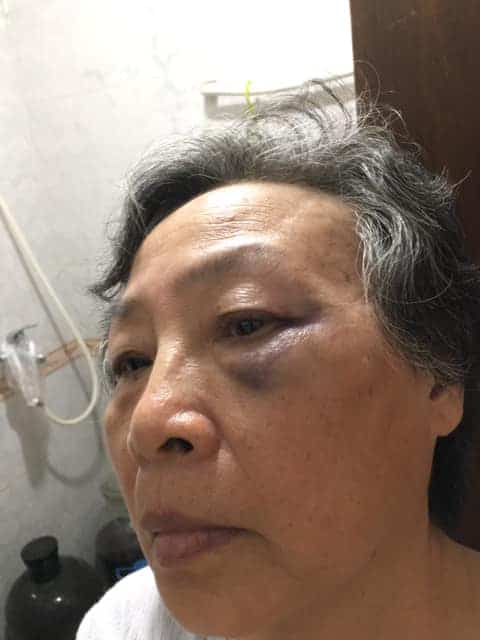 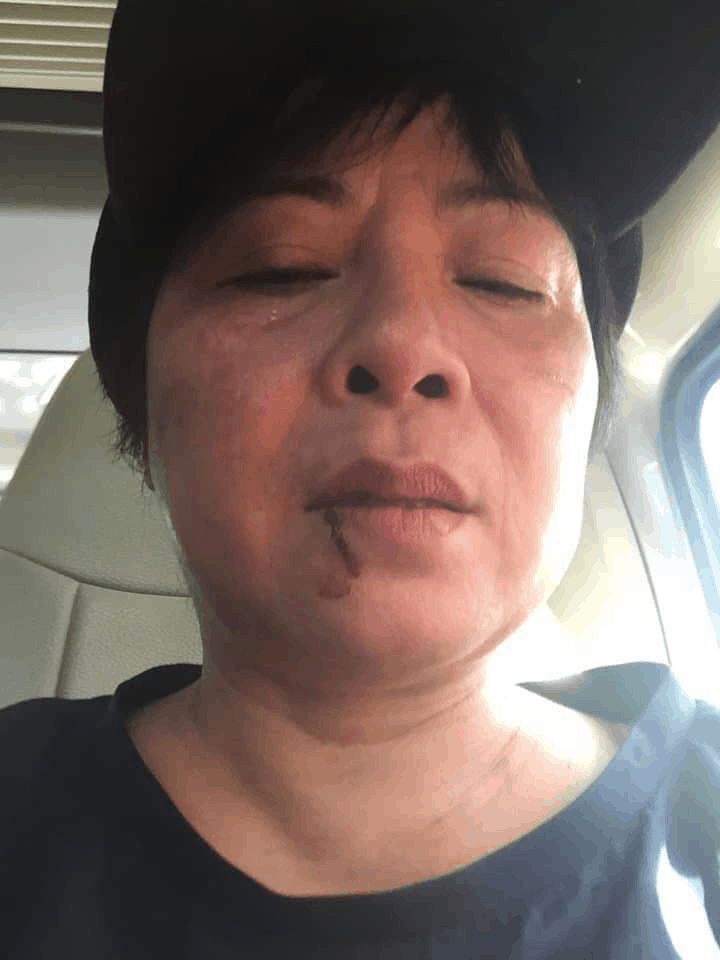 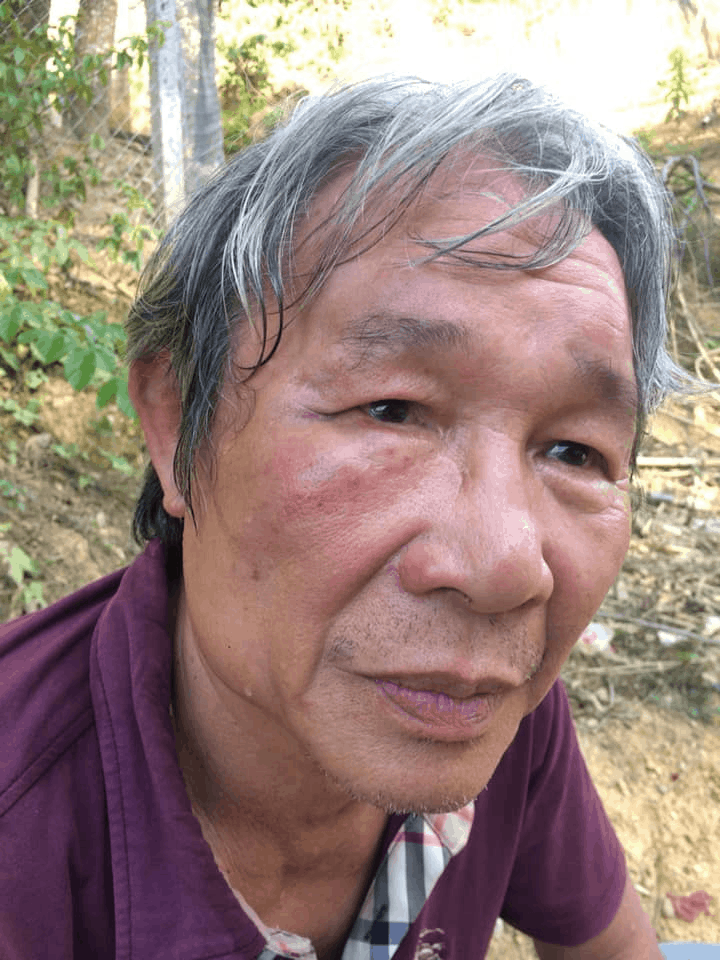