Greetings from The 88 Project! We bring you news, analysis, and actions regarding human rights and civil society in Vietnam during the week of March 8-14. Six defendants in the Dong Tam Commune case had their appeals denied this week; two are facing death sentences and one life in prison. The six were tried as part of a group of dozens of defendants arrested in the aftermath of the January 2020 police raid in Dong Tam Commune, outside of Hanoi, which left a local land rights leader and three police officers dead. One of the lawyers for the six released a memo detailing the procedural irregularities of the trial. Another Facebooker was arrested for online commentary; Tran Quoc Khanh was arrested in Ninh Binh Province and charged with “abusing democratic freedoms.” Female activist Doan Thi Hong was released from prison upon completion of her sentence. The UN Working Group on Arbitrary Detention released its decision in the case of former political prisoner Ho Van Hai. In the news and analysis section, read our article “The Price of Dissent,” covering effects of imprisonment on female activists. And check out news updates on maritime sovereignty issues and the Biden administration’s policies towards Asia. Take action with us to support female political prisoner and engineer Dinh Thi Thu Thuy, a single mother who was sentenced to seven years in prison in early 2021. 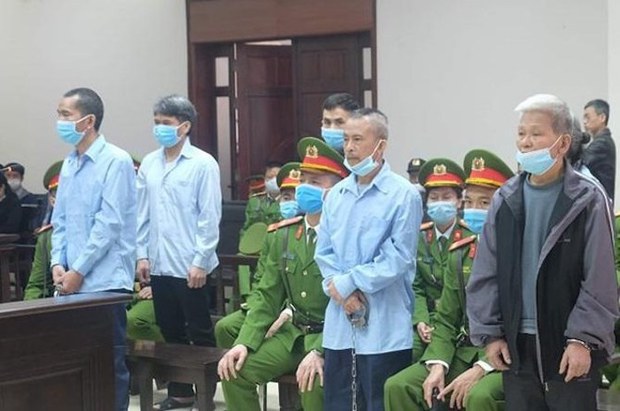 The Dong Tam appeals trial has concluded. All sentences remain the same. Le Dinh Cong, 57, and Le Dinh Chuc, 41, sons of Le Dinh Kinh, who was shot point blank by police, are facing the death penalty on “murder” charges that were never proven in the lower court. Bui Viet Hieu, 78, is facing 16 years, also for “murder.” Le Dinh Doanh, 33, son of Le Dinh Cong, is facing a life sentence for “murder.” Nguyen Quoc Tien, 41, will serve 13 years for “murder.” Bui Thi Noi, 63, Kinh’s foster daughter, will serve six years for “obstruction.”  Hoang Minh Thanh, chief of Procuracy in Hanoi, was assigned to oversee this trial only four days earlier. He “persuaded” Cong to change his plea from not guilty to “asking for leniency” from the court.

Ngo Ngoc Trai, one of fourteen lawyers working on the Dong Tam case, has listed thirteen critical issues in the prosecution’s case that have been either ignored or not satisfactorily answered. Most important of these is the attack plan, codenamed 419A, which the defense team requested be exhibited as evidence, but which was struck down. Another question centers on eyewitness Du Thi Thanh, Kinh’s wife, who saw her husband shot and killed, but who was not allowed to testify. Even though his USB drive was confiscated, lawyer Tuan Ngo managed to write down the court proceedings by hand — all 58 pages can be seen here. 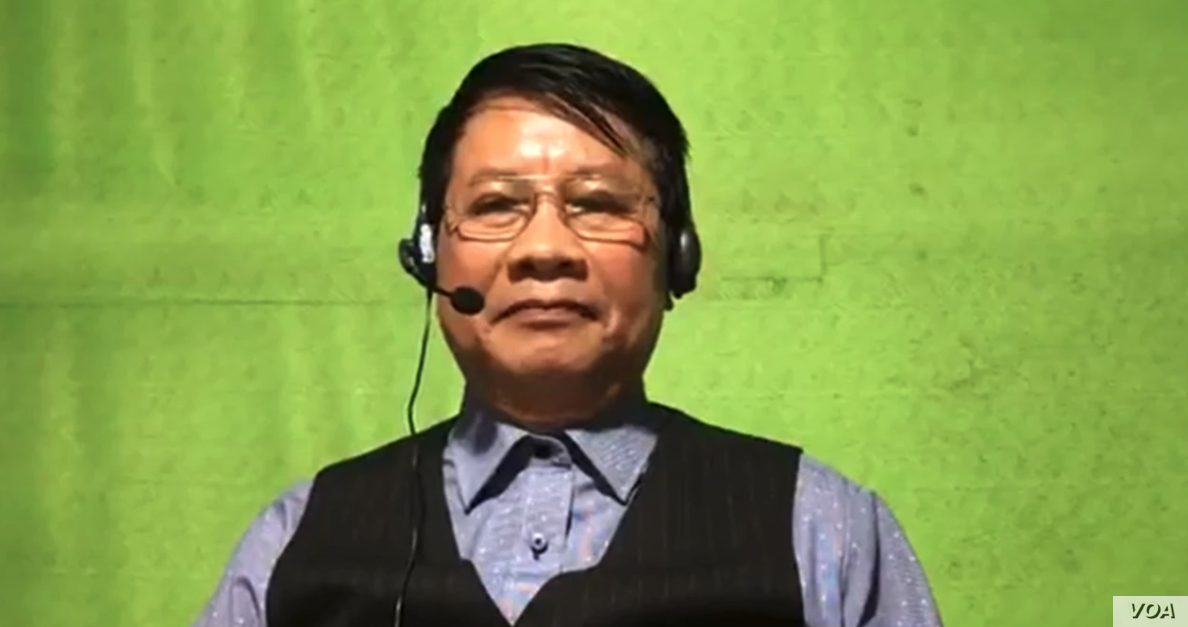 Facebooker Tran Quoc Khanh, 61, was arrested by police in Ninh Binh for postings the authorities  deemed to be anti-government. He’s being investigated for “making, storing, disseminating information, documents, items and publications against the Socialist Republic of Vietnam” under Article 117 of the 2015 Criminal Code. The authorities said that between 2018-2020, Khanh posted videos that “defame” the Communist party, according to the state-run newspaper Phap Luat [Law]. He’s being held incommunicado and cannot meet with his lawyers during the four-month pre-trial detention period. If convicted, he could face between seven to 20 years in prison.

Doan Thi Hong was released after serving two and a half years in jail for protesting the draft Law on Cybersecurity in 2018. She is the first to be released in the group of eight people thought to be affiliated with the Hien Phap constitutional rights group. She was jailed even though the law prohibits imprisoning mothers with children under three years old. Since her arrest, her daughter has suffered psychological and speech problems. Hong will still be on probation for two years. 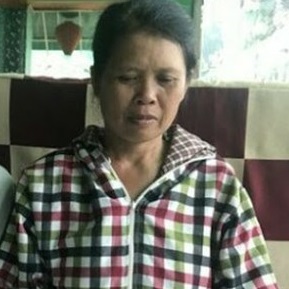 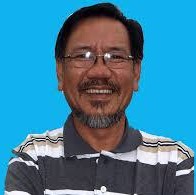 The Working Group on Arbitrary Detention of the UN Human Rights Council has issued its formal decision on the case of former political prisoner Ho Van Hai after Vietnam finally responded to the inquiry in October of last year. The Working Group rejects the government’s assertion that Hai’s arrest and subsequent trial were legal. It concludes that Vietnam has violated multiple articles of the Universal Declaration of Human Rights as well as the International Covenant on Civil and Political Rights. It gives Vietnam six months to rectify the situation by compensating Hai with reparations. Furthermore, it demands that Vietnam bring its laws into accordance with international norms in regards to arbitrary detention and arrest.

The Price of Dissent: Women and Political Activism in Vietnam, The 88 Project, March 8, 2021: “The activist and journalist Pham Doan Trang told the 88 Project in 2019 that political activism is not just a struggle against dictatorship, but also a struggle against the limits of Vietnam’s patriarchal society. ‘Women are not only victims of the regime in terms of politics, but they are also victims of gender inequality, or self-constraint,’ she explained. ‘Women restrain themselves in thinking that they are not suitable for a political career, that politics is for men…. Thus, we should think that our fight is not only against dictatorship, or to free Vietnam from dictatorship. It is also a fight to free ourselves from our own ideological constraints, from the prejudice that we impose on ourselves’.”

Beijing’s focus on maritime law ‘reflects rising concerns over South China Sea’, Jun Mai, South China Morning Post, March 8, 2021: “A February report by the Centre for Strategic and International Studies’ Asia Maritime Transparency Initiative said Vietnam had been building up its defences in the Spratly Islands to ‘ensure it can strike Chinese facilities’ there. Wang Jiangyu, an international law expert at City University of Hong Kong, said stressing the importance of maritime law was not new for Beijing. ‘But discussing it in such a high-level document says much about China’s increasing belief in the need to use international law,’ Wang said. ‘However, it will still decide whether to take part in arbitrations on a case-by-case basis’.”

The Evolution of Vietnamese Foreign Policy After the 13th Party Congress, Le Dinh Tan and Lai Anh Tu, The Diplomat, March 10, 2021: “The growth of its national prestige and capacities has enabled Vietnam to pursue a more proactive foreign policy. Vietnam’s foreign policy has benefited from the country’s success in fighting COVID-19 and its constant economic growth through connectivity with the world and the region. The country has also benefited from its performance in dealing with international and regional issues through its recent leadership roles within ASEAN and the UNSC, the hosting of the second U.S.-North Korea Summit in 2019, and especially its enhanced engagement with U.N. peacekeeping operations.”

ASIABiden administration’s policy towards Vietnam, and the South China Sea, Pankaj Jha, Modern Diplomacy, March 2, 2021: “The US policy towards South China Sea particularly in the context of the US economic and strategic interests in the region can be seen from the fact that the US deployed its one of the advanced submarines USS Ohio (guided missile nuclear submarine) in the contested waters. This clearly means that there is no digression from the Trump policy towards China, and Joe Biden is keen to pressurise China to desist from threatening its neighbours with regard to its claim in the region. The State Department spokesperson Edward Price has stated ‘We remind the PRC and all those forces operate in the South China Sea that responsible maritime act with professionalism and restraint in the exercise of their authorities.’”

A Female President in Vietnam in the Next 5 to 10 Years?, Carlyle A. Thayer, March 8, 2021. “Yes, it is possible, providing the leadership of the Vietnam Communist Party sets itself that objective and takes determined measures to achieve this goal. As of 2020, the ratio of females to males in Vietnam was roughly equivalent; 48.74 per cent of the population is female and 48.6 per cent is male. Women, however, make up only 19 per cent of the current Central Committee, including nine who are currently provincial party secretaries. In 2016, the twelfth national party congress elected three women to the Politburo (Nguyen Thi Kim Ngan, Tong Thi Phong and Truong Thi Mai). After the twelfth congress, the National Assembly elected Dang Thi Ngoc Thinh, a member of the Central Committee, as vice president. In 2018, when President Tran Dai Quang died in office, Thinh served as Acting President for a brief time.”

All March, we will highlight actions you can take for Vietnamese female political prisoners. Please share this call with your network and representatives to raise awareness of and support for Dinh Thi Thu Thuy. She is an aquaculture engineer and environmental activist currently serving a seven-year sentence for “propaganda against the state.”
© 2021 The 88 Project
https://the88project.org/wp-content/uploads/2021/03/Dong-Tam-villagers-at-their-appeal-trial-on-3.8.21_Source-RFA.jpeg 411 620 kayleedolen https://the88project.org/wp-content/uploads/2019/01/88project.png kayleedolen2021-03-15 14:44:562021-03-15 14:44:56Vietnam Free Expression Newsletter No. 10/2021 – Week of March 8-14