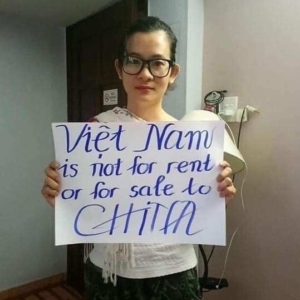 Who is Dinh Thi Thu Thuy?

Dinh Thi Thu Thuy is an aquaculture engineer and ecological activist from Nga Bay City in the Mekong Delta. Thuy campaigned with a number of local eco-groups to protect the delta area from pollution and exploitation. Thuy became increasingly politically active from 2018 onward when she participated in protests against a controversial cybersecurity bill and the establishment of special economic zones (SEZs), which protestors believed would disproportionately benefit China. Thuy was arrested during the protest and allegedly beaten whilst in detention. She continued to be harassed by the authorities long after her release. Undeterred, Thuy used Facebook to speak out against the degradation of the environment in Vietnam and the ecological damage caused by foreign investment. During the COVID-19 pandemic, Thuy also used her platform online to criticize the government’s response to the virus.

On April 18, 2020, Thuy was arrested for her online activism. It was alleged that Thuy opened numerous Facebook accounts to disseminate thousands of documents defaming and slandering the party leadership. On January 20, 2021, after a trial lasting just four hours, Thuy was sentenced to seven years in prison. She was found guilty of breaching Article 117 of the 2015 Penal Code which criminalises ‘spreading information…opposing the state’.  The evidence against Thuy amounted to just five Facebook posts which had received only 130 Likes and 50 Shares. Due to the harsh conditions she endured in pre-trial detention, Thuy decided not to appeal her sentence. Thuy would have been required to await the decision of her appeal in the same facilities.

Freedom of expression is protected by both Vietnam’s 2013 Constitution and international treaties, but the government often uses the broad scope of laws like Article 117 to crack down on free speech. Thuy, who has a ten year old son, spent eight months in pre-trial detention unable to communicate with her family. Only in December 2020 was Thuy allowed to meet her lawyers for the first time. In 2018, the UN Committee against Torture observed that Vietnamese detention facilities did not meet minimum international standards because of the lack of adequate sanitation, lighting, and healthcare. Despite being in good health before her arrest, she now suffers from vestibular disorders, heart valve regurgitation, calcium deficiency, and insomnia. It was only after Thuy was hospitalised that her family was allowed to visit her. Harsh treatment during detention is often used by the authorities to pressure prisoners into admitting guilt when the trial reaches court.

“Stand up for #freespeech in #Vietnam. We urge the Vietnamese government to release the eco-activist Dinh Thi Thu Thuy and reunite her with her family. Read more and take action for Thuy here.”

Read more about Dinh Thi Thu Thuy ’s background and activism in her profile in our Database of Persecuted Activists in Vietnam.