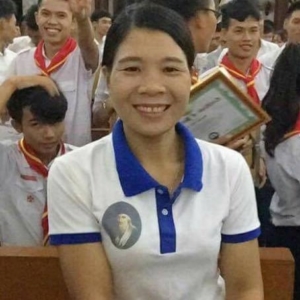 Who is Tran Thi Xuan?

Tran Thi Xuan is a Catholic activist from Ha Tinh province in central Vietnam. Xuan participated in protests following the Formosa environmental disaster in April 2016 after the steel plant released toxic chemicals into the ocean, destroying wildlife and devastating the local economy which relies heavily on fishing. Xuan is also a member of the Brotherhood for Democracy.

On October 12, 2017, Xuan was arrested on her way home from church, with the authorities citing Article 79 of the 1999 Penal Code as the charge against her. Article 79 prohibits “carrying out activities aimed at overthrowing the people’s administration.” There was no warrant for her arrest, and the reasons for her arrest were not made clear. On April 12, 2018, Xuan was handed a nine-year prison sentence.

Xuan has been denied the right to free expression and has been persecuted for her participation in peaceful political protest. She has also been denied the right to a fair trial, as she was denied the use of an attorney during her trial. In addition, Xuan has been denied adequate medical treatment for her pre-existing medical conditions, including kidney disease. Images from her trial suggest she was suffering from fluid retention because of her kidney condition, and in 2019 we received numerous reports from Xuan’s family about her physical deterioration. Xuan was visiting the hospital once a month, as she was fainting regularly. In February 2020, the authorities allowed her to be treated in the hospital for coronary occlusion, although earlier requests for her to receive medical treatment were denied.

“We urge the #Vietnamese government to respect #freespeech and release Tran Thi Xuan. Xuan was one of many activists arrested for participating in protests in the aftermath of the Formosa disaster in 2016.”

I am writing to bring the case of Tran Thi Xuan to your attention. Xuan is an activist from central Vietnam who is currently serving a nine-year prison sentence for participating in protests in the aftermath of the Formosa disaster in 2016 and her affiliation with the Brotherhood for Democracy.

In 2016, a Taiwanese Steel plant, Formosa, released toxic waste into the ocean in central Vietnam. This was devastating both to the environment and the local economy, which relies heavily on fishing. Over a hundred tons of dead fish washed onto the beaches. Large protests followed, and for the next year, communities in central Vietnam demanded fair compensation.

In October 2017, Xuan was arrested for her involvement in the protests, and was later charged with conspiring to overthrow the government.

Xuan’s arrest was politically motivated, and the charges against her are unfounded. Xuan has been denied the right to free expression and the right to a free trial. Xuan was not allowed an attorney during her trial. Until February 2020, Xuan was denied adequate medical treatment for her kidney disease and was fainting regularly. Images from her trial suggest she was suffering from fluid retention.

I am asking that you raise awareness of this case in order to pressure the Vietnamese authorities to release Xuan and ensure that she receives adequate medical treatment.

You can find more information about Xuan by visiting her profile on The 88 Project website.

Thank you for taking the time to read this. 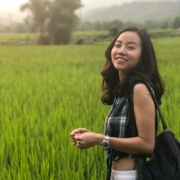