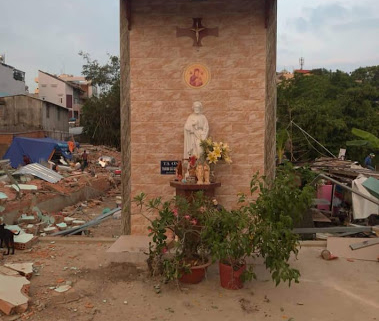 The 88 Project, January 8, 2019: 2019 started with a high-profile forced eviction against residents of Loc Hung vegetable garden, a Catholic residential neighborhood situated in the middle of Ho Chi Minh city. Hundreds of residents, many of them political activists, suddenly found themselves homeless, with neither compensation for the lost land nor the benefit of a resettlement program. They have become Dan Oan, or Victims of Injustice, a term that people whose land has been seized with little or no compensation call themselves.

Loc Hung vegetable garden is a six-hectare area that belongs to the Catholic Church of Vietnam in Ward 6, District Tan Binh, Ho Chi Minh City. That area has been in dispute between the local government and the households for nearly twenty years. The authorities prevented the Loc Hung residents from legalizing their land use right even though the residents have valid documents to support their claim. The Catholic residents have been living peacefully there since migrating to the South in the aftermath of the Geneva Accord in 1954 that divided the country, and their land use has not involved any dispute. The authorities have offered Loc Hung residents a low price for their six hectare area; the market price would be approximately hundred times higher. The legal basis of the government’s action is unclear, since a land recovery decision, legally required before a forced eviction could take place, has never been issued for Loc Hung. 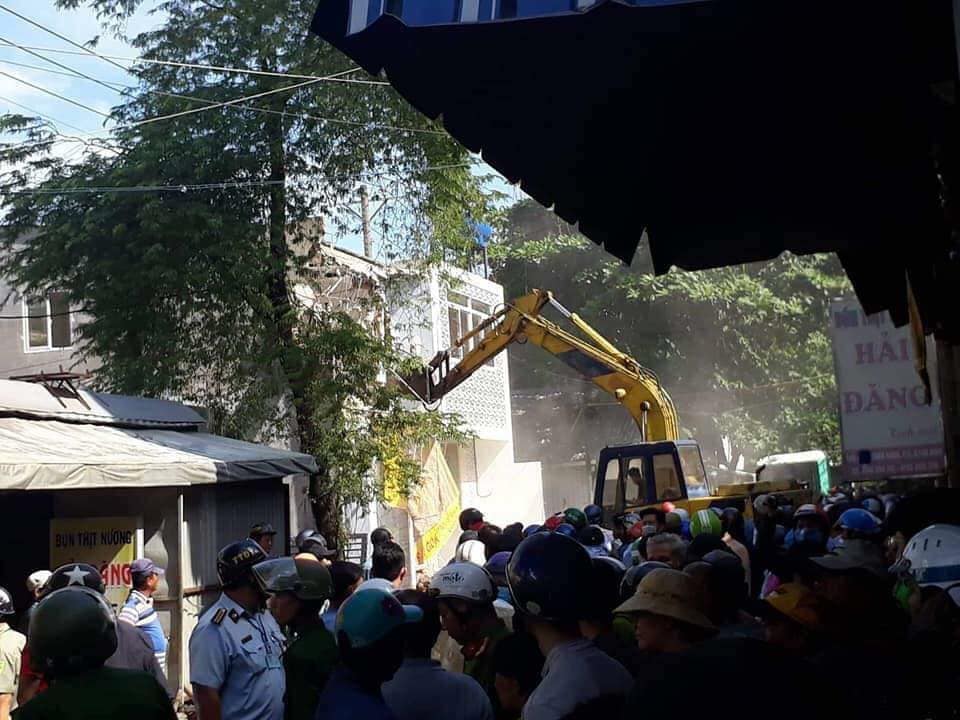 The negotiation ended with the forced eviction on January 4. Early in the morning, the authorities mobilized a powerful force, including police, civil defense forces, and volunteer youth, with equipment such as bulldozers and firetrucks, to destroy around ten houses. Electricity and internet were cut off to prevent residents and activists from taking and sharing photos and videos on social media. The authorities also started to watch Saigon-based activists during the previous day, to prevent them from leaving their homes to show support at the forced eviction site. Nguyen Tri Dung, a son of Blogger Dieu Cay (Nguyen Van Hai), was even taken into custody right in front of his house and detained at the police station of Ward 8, District 3, from noon to 7:00 pm, as he left to go to Loc Hung. Before releasing him, a policeman reminded him to not go anywhere, especially during the following days.

Ten more residents were also detained on that day in different places. In an interview by Amen TV, some of them said they were harshly beaten both before and after their arrest. Mr. Chanh, a representative of the Loc Hung people, reported that he was suddenly arrested while demanding to have a dialogue with the representative of the authorities. In the police station of Ward 10, Tan Binh District, police accused him of “disturbing the public order” and forced him to sign documents. Although all of them were released and came home safely on the same day. 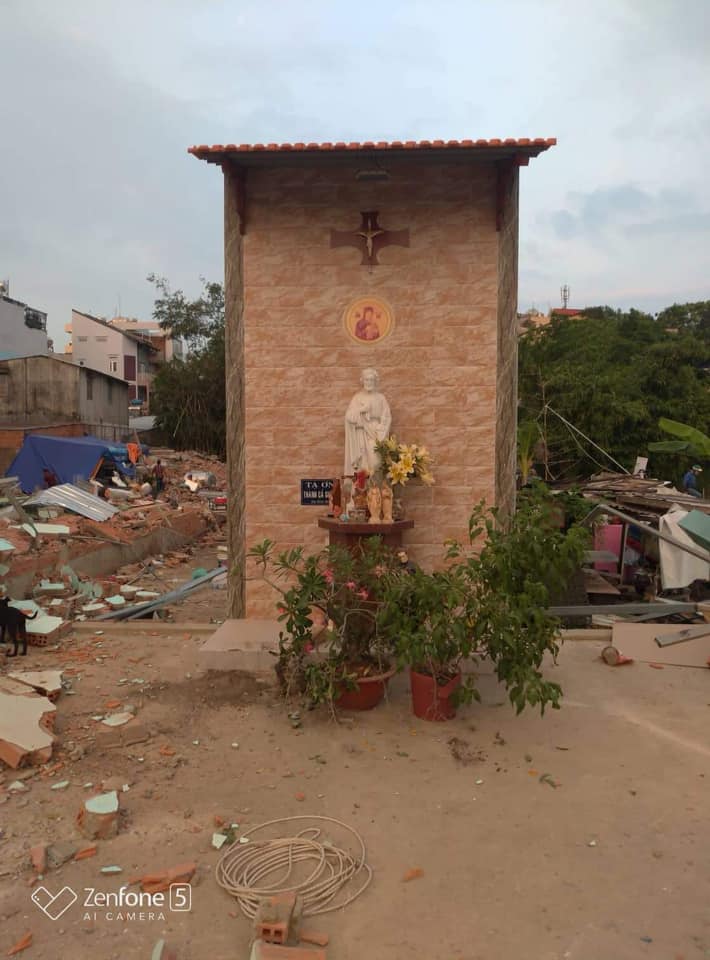 In the early morning of January 8, the authorities continued to destroy many houses. The forced eviction started at 5:50 am with the authorities mobilizing forces to isolate Loc Hung. When the residents were praying in front of a Virgin Mary statue, police turned up their speakers, causing noise harassment.

At 6:00 am, police arrested Cao Ha Truc when he called for emergency support. His wife was also arrested at around 9:00 am before police destroyed their house. Truc is one of the leaders of the residents of Loc Hung, representing the community in the negotiations with the authorities the past 20 years. Thuc was only released at 2:00 am January 9.

Elderly and disabled veterans of the former Republic of Vietnam were also direct victims of this forced eviction, as they were living in Loc Hung garden and relying on the Redemptorist Church’s tribute program. They are not recognized as veterans by the government after the communist government took over the South, and thus do not receive any public benefits. On January 8, the authorities forcefully removed them from the service house they lived in, before destroying it. One of the disabled veterans, Vo Hong Son, arrived safely at the Office of Justice and Peace, an agency of the Redemptorist Church, while the situation of the others was unknown. 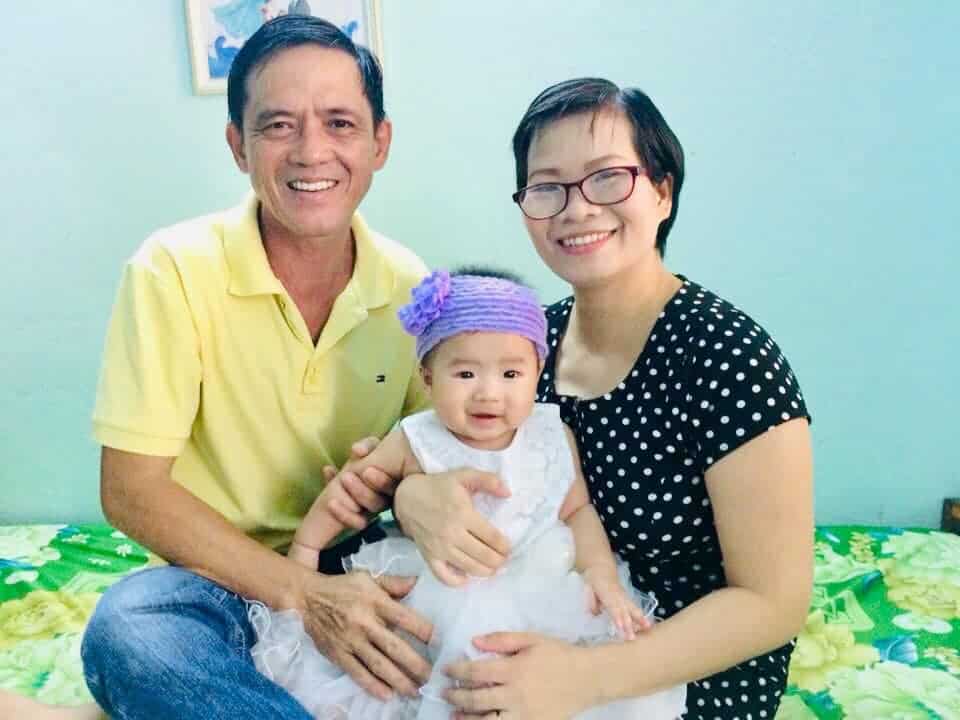 Authorities also destroyed the house of former political prisoners Pham Thanh Nghien and Huynh Anh Tu. The couple just completed building their new house in Loc Hung with their ten-year savings, only to see that house destroyed a week after. Pham Thanh Nghien managed to leave to bring her one-year-old daughter to a safe place thanks to a friend’s support, while Huynh Anh Tu stayed behind and witnessed the destruction of their house at 4:25 pm. Tu and Nghien’s family is now in a particularly precarious situation: as a former refugee in Thailand and long-term political prisoner, Huynh Anh Tu does not have any identification papers, so they are unable to rent. Nghien and Tu’s toddler has asthma and they need a home with electricity for her to have access to a functioning nebulizer aspirator.

As a matter of fact, Loc Hung vegetable garden was home, permanently or temporarily, to many political activists. Besides Nghien and Tu, Pham Doan Trang was also living in the area at the time of the forced eviction, and many political activists before them had found refuge from government’s persecution in this community. Some activists thought this could be a reason why the area became an urgent target for the government’s land seizure.

In socialist Vietnam, land belongs to “the ownership of the entire people represented and uniformly managed by the State” (Article 53 of the 2013 Constitution), whereas organizations and individuals are only entitled to “land use rights.” However, the Constitution also requires that the state can only “recover land used by organisations and individuals in imperative cases provided by the law for the purposes of national defence, national security and socioeconomic development in the national and public interests,” and that “the recovery of land must be public, transparent and compensations must be provided in concordance to the law” (Article 54 of the 2014 Constitution).

In reality, however, as real estate prices have skyrocketed in the past decades, land disputes have became the most controversial political issue. In the name of vaguely defined “public interest,” local authorities often carry out land grabs in illegal manners, failing to comply with legal requirements of consultation and fair compensation. These grabs have fueled many large-scale public protests and violent reactions from affected landowners, many of them farmers.

This forced eviction in the very first days of 2019 is the continuation of this trend of illegal land seizures in a one-party country where there are no venues for the victims to hold public authorities accountable, since the whole state apparatus and judicial system are controlled by the only political force – the Communist Party of Vietnam. In fact, many victims of injustice and land rights activists became political activists, as they came to realize that the underlying cause is not just the legal system, but the political system that produces those laws and policies.