RFA January 13, 2017: Vietnamese authorities released one dissident from jail this week as they exiled the former political prisoner to France, but at the same time they blocked another well-known dissident from leaving the country.

Dang Xuan Dieu, a blogger, community organizer and a member of the outlawed Viet Tan organization, was released late Thursday and deported to Paris after serving six years of a 13-year prison term, according to family members and his international attorney.

Dieu was one of Vietnam’s most high-profile political prisoners as he refused to stop his civil disobedience once he was jailed, refusing to wear a prison uniform and staging prolonged hunger strikes.

Truong Minh Tam, a former prisoner who was confined in a cell next to Dieu’s, told RFA in 2014 that prison staff humiliated Dieu for several months the previous year by letting other prisoners beat him and forcing him to serve as a “slave.”

“Dieu had been disciplined many times not because he asked anything for himself but he was against unfairness in prison treatment of prisoners,” Truong told RFA’s Vietnamese Service on Friday. “Any reforms we see today in that prison and other prisons as well come from his contributions to the human rights of prisoners.”

Dieu, a Catholic, got the longest jail term meted out to a group of Catholic activists, students, and bloggers convicted for their involvement with Viet Tan, a U.S.-based pro-democracy organization banned by the Vietnamese government.

‘Dieu should never have been imprisoned’

The United Nations Working Group on Arbitrary Detention (UNWGAD) ruled in 2013 that the Hanoi government violated Vietnamese and international law by arbitrarily detaining Dieu and his colleagues.

They were sentenced in January 2013 on charges of attempting to overthrow the government, a criminal offense under article 79 of the Penal Code.

Article 79 is among the broadly-worded national security laws that rights groups and Western governments say Vietnam uses to persecute dissidents.

“Mr. Dieu should never have been imprisoned,” Weiner said.  “His arrest and imprisonment for engaging in peaceful political expression violated the settled international human rights standards that Vietnam itself has accepted, as well as Vietnam’s own constitution.”

Dieu’s brother, Dang Xuan Ha, told RFA on Jan. 12 that three policemen told him that the dissident could leave.

“They came to tell me that, but it is hard to know what happens in Vietnam,” he said. “They told me that I could meet him, but they only gave me about an hour to get to there. The prison is about 1,300 km (780 miles) from my house, so how could I go see him?” 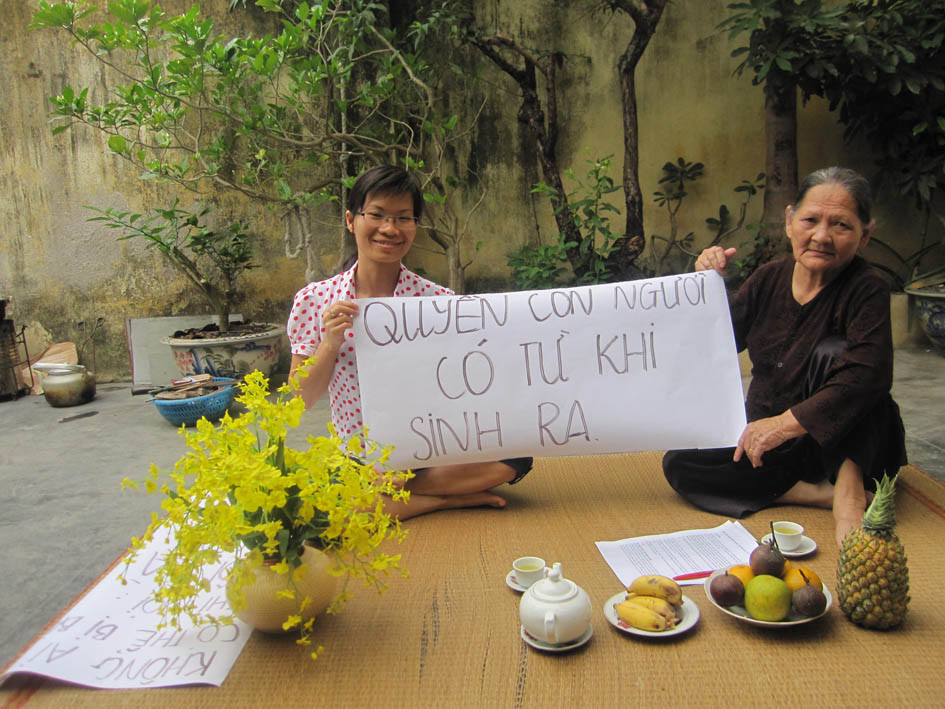 Hai Phong, 5 May 2013: former political prisoner Pham Thanh Nghien and her mother in their back yard. The sign reads: “[We have] human rights since we were born.”

While Dieu was sent to France, former prisoner of conscience Pham Thanh Nghien was barred from leaving Vietnam for Cambodia.

She was stopped at the Moc Bai border checkpoint of Tay Ninh province on Friday as she was attempting to leave to help her father get medical treatment, she told RFA.

“I’m bringing my father to Bangkok for medical treatment and to visit my husband’s siblings,” she told RFA while she was still at the checkpoint.

“They told me that I am on the list,” she added.  “I asked them what the reason was but they could not tell me, so I am still waiting here.”

Pham Thanh Nghien was arrested in August 2009 and tried in 2010. She was sentenced to a four-year prison term and three years on probation under the charge of conducting propaganda against the state.

She has protested over China’s killings of Vietnamese fishermen in the Tonkin Gulf and the South China Sea, and she also staged a sit-in protest at her own house before her arrest. 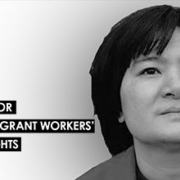