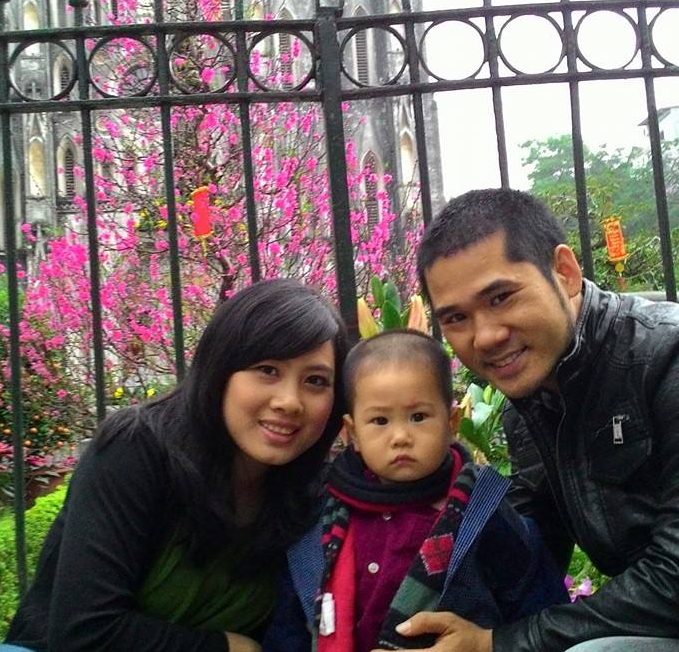 Paulo, seen here with his wife (activist Trinh Kim Tien) and child, was arrested and then beaten up by unidentified men. Source: Vietnam Right Now

Vietnam Right Now, Jan. 17, 2017: It started as a class for young would-be activists eager to learn about their political rights, and ended a few weeks later with a police raid and vicious assaults on the streets of Ho Chi Minh City. The violent attacks just before Christmas highlighted the perils of standing up for human rights and democratic freedoms in Vietnam’s one party state, where government critics are routinely subjected to intimidation and arrest. Doan Trang sent this report on how one group of independent minded young people incurred the wrath of the national security establishment.

When Hanah (her name has been changed to protect her identity) joined the class, she didn’t expect that a few weeks later she would be sitting in a chair being interrogated by a group of policemen and then be kicked to the ground and stomped on by a gang of toughs.

In her early twenties, Hanah came to Ho Chi Minh City from the countryside and took a job as a hairdresser’s apprentice. She saw few other prospects in the city, as she came from a poor family and had quit school at 16.

She became interested in politics and society when she joined thousands who took to the streets to demand answers over the government’s handling of a major environmental disaster off the north-central coast last April and May.

As a practicing Catholic and someone with a fast developing social conscience, she was appalled by the aggressive and brazen way in which police broke up the demonstrations in Ho Chi Minh City and elsewhere.

She made up her mind to get involved, and joined a class of six others, mostly graduates and post-graduates, who wanted to know more about the development of civil society.

The leader of the class was Paulo, a human rights activist.

They gathered in a small apartment in an anonymous apartment block in Ho Chi Minh City, where they lived and cooked together, and took courses on political science, public policy, law, communication and mass media, TV production and V-logging, and basic journalism.

Many of the ideas were new to them, particularly the concept that the public should be consulted on major policy issues, and political parties don’t have to be bad or frightening monoliths.

It was a startlingly different message from the Communist party line that a multiparty system can only lead to chaos, and democratic parties only work for narrow selfish interests.

The routine in the house was only briefly interrupted when one of the students kept receiving phone calls from a policeman. He eventually agreed to meet him, but came back to the house safely at the end of the day.

The lecturers, meanwhile, kept stressing the importance of security, and held up the example of a similar class in Hanoi, which was raided and the participants beaten up.

They were also told about the death of the blogger, Ho Duc Thanh, who had been one of the lecturers for the Hanoi group and who died from a mysterious illness five months after the raid in 2014.

Thanh had been a respected pro-democracy campaigner, who spoke English and had good international contacts.

Class members in the Ho Chi Minh City group were told to knock three times on the door when they wanted to enter, so there was a nervous frisson on the day after Christmas when the door bell suddenly sounded. The lecturers had already left, but the students had stayed behind waiting for new classes to begin in a few days. 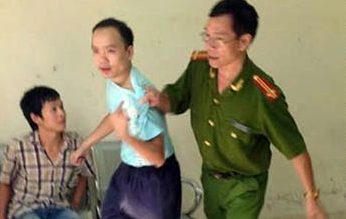 The students looked out of the window and saw about twenty policemen in their green uniforms waiting outside.

When the students attempted to delay and conceal their computers and phones, the police broke down the door,

They were all arrested when police found they had not registered with the local authorities to stay in the apartment – a violation under Vietnam’s strict laws of household registration.

When one of the students tried to protest, he was hit across the head and sworn at by one of the police officers.

They were all taken to separate police stations for questioning. Paulo, meanwhile, was arrested in a nearby coffee shop and taken away with a jacket over his head so he wouldn’t know his whereabouts.

Hanah has only a blurred memory of the interrogation. She was repeatedly questioned by many officers, who kept insisting that the group was trying to mobilise forces and that it wanted to overthrow the government. Of most interest to them seemed to be the question of funding, and whether they were receiving money from abroad.

Hanah kept insisting that she was a Catholic and had only wanted to express her views on love, marriage and happiness. The answers infuriated her interrogators.

She was finally released at midnight, but only after the police had confiscated all of her identity documents. They said she would have to return when summoned if she wanted them back.

The police then paid a taxi driver to take her home.

She decided to go back to the apartment block, but as the taxi approached it was surrounded by a group of angry men who demanded that the girl get out.

They grabbed her by the arms and legs and punched her to the ground before stamping on her belly and kicking her in the face.

The assault seemed to continue for several minutes and the taxi driver was also badly beaten.

The taxi driver said later that he was not surprised to see that activists were being attacked in such a way, but was appalled to find out that even young women were being beaten up.

Paulo had also been attacked in a similar way. His taxi was intercepted, he was dragged out and repeatedly kicked and punched in the face.
One of the students said he was assaulted by uniformed police themselves inside the police station.

The apartment, they found out, had been “confiscated” by police, and the group had to disperse, seeking sanctuary elsewhere, including in churches.

Their laptops and phones had been confiscated.

They have managed to get in touch with each again online, although they have not yet organised another course.

They all say they are determined to continue their work, even though they now know the harsh reality. To stand up against an oppressive government, they will have to face much uncertainty and the constant threat of further arrests and assaults.