On November 30, Thuc’s family reported that they were able to visit him in prison. He told them he had been on a hunger strike for seven days, that he had lost 3.5kg, and his blood pressure had been dropping; he was feeling very weak and tired.

Thuc told his family that the wardens at Prison 6 did not cause him any problems; all his petitions were forwarded to the court as requested. But despite his and everyone else’s efforts, the court has remained silent. That is why, he said, he must fight to the end, even if he must die, to force the government to respect the law.

Thuc has been trying to get the High Court to review his request to have his sentence reduced based on changes in the 2015 Criminal Code. Thuc was charged with “preparing to commit a crime,” which in the new Criminal Code only carries a maximum sentence of five years, not 16. He already went on a hunger strike in October to request a review, but to no avail.

Thuc told his family that he would try his best to stay strong but warned that they should be prepared for the worst. He asked them to send out this message on his behalf:

“I want to apologize to my father, my family, and everybody. I’m sorry that I could not reach the end successfully with you all, but please keep moving forward on the path of enlightening our compatriots and the world, keep up the battles for Human Rights. Make the most use of my departure by pushing this struggle to its end by this year or the next. Thank you everyone, I will remember you always.”

We ask that the public, international organizations, and foreign governments immediately press the Vietnamese government for an update on Thuc’s health and to examine the demands that led to the hunger strike.

On January 14, 2021, Thuc’s family received information from a reliable source that Thuc was put on an IV line for a few days and Thuc is no longer in danger but still weak.

On December 4, Thuc called his family and told them that Prison No. 6 will not allow any visitors due to COVID-19. The family made him aware of the current appeals for him. Thuc appreciates this and will not stop fighting; he asked everyone to send in letters or petitions to the Vietnamese government.

Read more about Thuc’s background, activism, and efforts to preserve his and others’ human rights while imprisoned in his profile in our Database of Persecuted Activists in Vietnam. 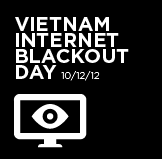