Thinh Nguyen, a prominent independent artist and film-maker, was detained without a warrant by Hanoi public security forces at 12:00 pm local time on Friday, October 25, 2019, after a search at his home. He was released later in the evening of the same day, but is still facing a high risk of re-arrest.

According to journalist Pham Doan Trang and our local sources, when Thinh stopped by a grocery store nearby his home around 11:30 am, he was violently captured by public security and then escorted back to his home and forced to open the door. A video captured by a security camera (above) showed Thinh handcuffed and coerced into his own house by a group of ten men, of whom only one was wearing police uniform. After 15 minutes searching his house, at noon, the public security took Thinh away without any arrest warrant.

The manner of his arrest led many to think that Thinh was going to be charged. Local activists quickly spread the news via social media. Pham Doan Trang’s post about the incident was shared almost 700 times within seven hours. 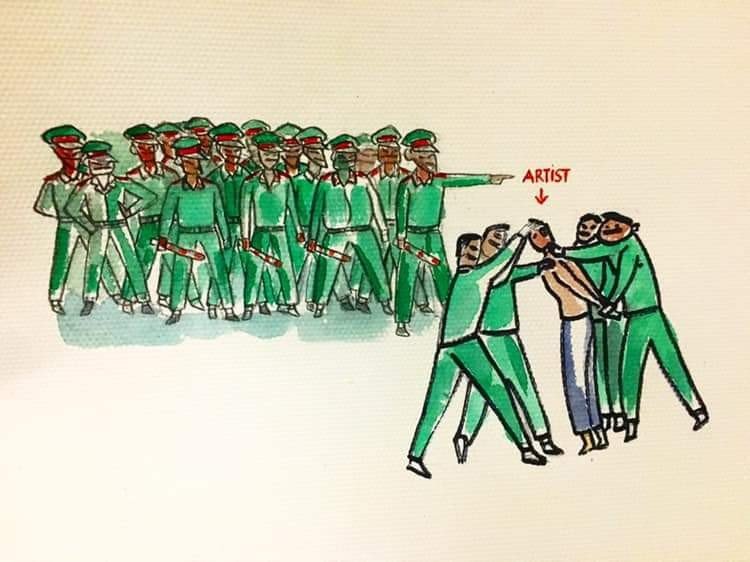 Thinh was released later in the evening but his two computers, cameras, phones, and other electronics and books were confiscated. He told AFP that during the detention, the security asked a lot of questions about his work. He refused to answer without the presence of a lawyer.

Thinh Nguyen is known for his creation of the video interview series Thinh’s Stories (Chuyện của Thịnh) which give wrongfully convicted prisoners, death row inmates, prisoners of conscience, and their families a chance to tell their stories and their concerns with the hope that it could penetrate the public attention. Until now, the series has featured many landmark cases in Vietnam such as the case of death row inmates Ho Van Hai, Dang Van Hien, and Nguyen Van Chuong, activist Hoang Duc Binh, and journalist Pham Doan Trang. The project also highlights miscarriages of justice, forced evictions, and victims of unjust treatment by the state’s apparatus. Until now, Thinh is a rare artist inside Vietnam who publicly creates and publishes this type of work.

Thinh has also been an active member of Green Trees (“Vì một Hà Nội Xanh”), a civil society movement focusing its activities on protecting green spaces in Ha Noi. Established in 2015, Green Trees quickly became a leading force in environmental protection in Vietnam and received widespread support. Green Trees’ latest project – a documentary named “Don’t be Afraid” – has received national and international attention, but also has put the group under the watch of public security and many of its members are now at risk. The recent arbitrary detention of Dang Vu Luong, Cao Vinh Thinh, Trinh Hoang Thanh, and Nguyen Van Phuong was part of this worrisome trend.

Thinh is still facing high risk of re-arrest for his artistic creations. We call upon the international community and concerned individuals and organizations to speak out about his arbitrary detention, to let the Vietnamese government know that they can no longer take such unlawful actions without domestic and international attention and condemnation. No one should be intimidated or persecuted for their peaceful political expression and artistic creation.

Update on Nguyen Nang Tinh: Trial Postponed As Lawyers Did Not Get Access to...
Scroll to top