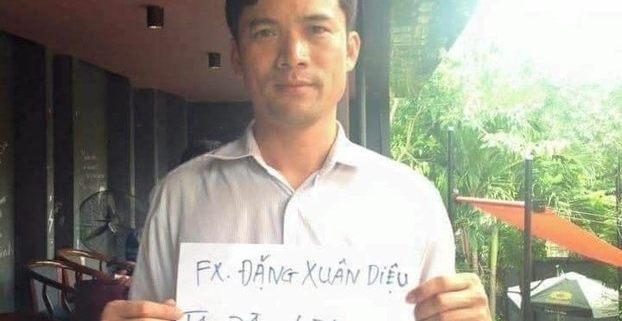 On May 27, 2019, The Security Investigation Agency of Nghe An Province arrested Nguyen Nang Tinh, a former lecturer of Nghe An College of Art and Culture, on the accusation of “propaganda against the socialist state.” He is known nationwide for teaching college students and pupils the song “Give back to the people” (Trả lại cho dân), a popular anti-authoritarian and pro-democracy song composed by artist Viet Khang – who was sentenced to four years of imprisonment in 2012.

The public security forces accused Nguyen Nang Tinh of committing “crimes” in a very similar fashion as other accusations used against activists. They first described him as a reactionary person who works and has connections with terrorist organizations, uses Facebook to libel the Communist Party and its leaders, calls for protest to destabilize legal order, etc. In international standards, these are, however, just the normal practices of freedom of speech that do not cause any tangible damage or violence.

His trial was scheduled for October 17, 2019, which means that Tinh has been detained for more than four months. During the detention, his family was able to visit him several times, and his brother, Mr. Nguyen Kim Dien, requested Tinh’s case be presented by three attorneys- Trinh Vinh Phuc, Nguyen Van Mieng, and Dang Dinh Manh.

However, the lawyers of Tinh have been barred from accessing and photocopying the case files and information during his entire detention. More importantly, the attorneys have requested many times the indictment of the People’s Procuracy against Mr. Tinh, one of the most important documents for the lawyers to have to understand the charges and prepare a proper defense for their client, but their requests were ignored.

With no option left, the attorneys decided not to participate in the trial on October 17 and force the Court to postpone it.

However, the prospect of a competent court respecting the rule of law is not high. According to the lawyers and Tinh’s family, the People’s Court of Nghe An warned that the next trial will be conducted normally with or without the lawyers.