Dang Vu Luong is an IT engineer and does business in Ha Noi. He is also an amateur saxophonist who has played for many events for civil society organizations in Vietnam.

Luong has been a well-known activist since back in the 2010s when the first wave of anti-China protests broke out. From there, he started to participate in other movements, including human rights, environmental protection, etc.

In 2015, Luong joined the group Green Trees and has been one of the most active and vocal members. Green Trees (GT - or Vì một Hà Nội Xanh) is a civil society organization, firstly focusing their activities on protecting green spaces of Ha Noi. Established in 2015, GT quickly became a leading force in environmental protection in Vietnam and enjoyed wide-spread support. Now, GT aims to help environmental movements of the nation. Its current project - a movie named “Don’t be Afraid” - has received national and international attention, but also has put the group under the watch of public security.

Around 9:00 am on August 22, a local police officer named Tu and two other security officers visited the apartment of Ms. My, a pianist and friend of Luong, and requested to see him. They then “invited” him to discuss some issues at the Office of Public Security of Quang An Ward.

At 11:30 am, Ms. My went to the office to check the situation of Luong, only to find out that they forced Luong to go to another location for further interrogation.  The alleged content of the talk included Ms Doan Trang’s information (she is a Vietnamese prominent activist and journalist that is constantly facing harassment from the public security forces), his involvement in the Don’t be Afraid documentary film, and the activities of Green Trees in general.

At 17:00 pm, members of Green Trees gathered at the  Office of Public Security’s Investigation Agency at Nguyen Gia Thieu street, Hoan Kiem District, Ha Noi, to demand an explanation on Luong’s detention and to demand his release. During the standoff, two members of the group, Nguyen Van Phuong and Trinh Hoang Thanh, were also arrested and beaten in a separate room.

However, after hours of struggle, Luong, Phuong, and Thanh were all released at 10:30 pm on the same day. 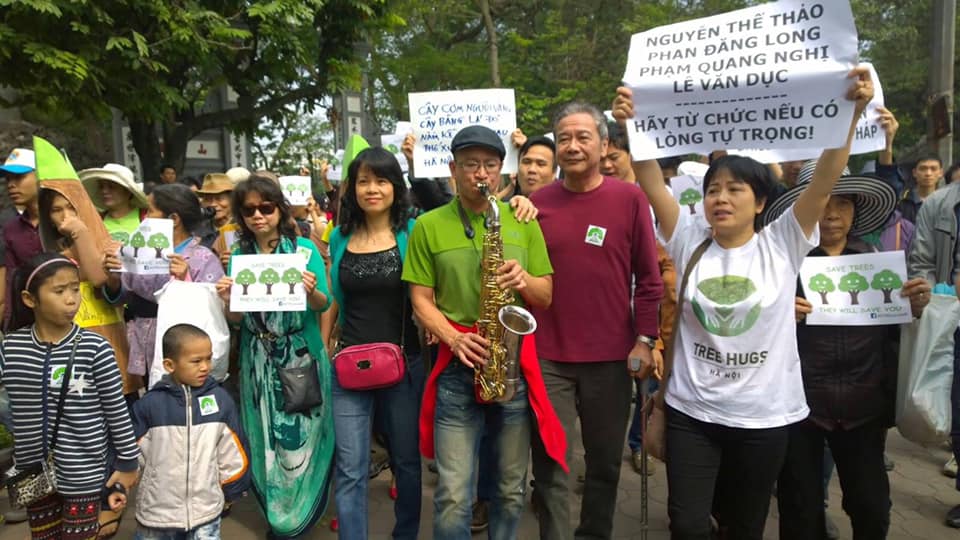 Luong and his saxophone

On November 24, 2019, Hanoi public security forces blocked a group of environmental activists’ access to an environmentally-themed piano concert by pianist Pho An My, held in the city’s Opera House. Some Green Trees activists had hoped to attend the event, but many police officers surrounded the Opera House, stopping people from live-streaming or taking pictures, and monitoring concertgoers as though they were criminals.

Cao Vinh Thinh and her husband arrived at the event on motorbike, only to be stopped by the police, forced into a car, and driven home by the authorities. She told Radio Free Asia that the public security forces were aggressive towards them.

Nhat Ky Yeu Nuoc, reposting a statement from Green Trees, reported that more than ten concertgoers were prevented from attending the concert in a similarly aggressive manner, among them Green Trees members Nguyen Anh Tuan and Dang Vu Luong. They were forced into a car and taken home by the public security.

Green Trees also reported that the authorities were hostile towards the concert because they suspected that the organizers of the concert had received money from “foreign organizations” through Green Trees to fund the event. So the production team and artists had constantly been harassed and “mentally tortured” during the three weeks that led up to the event. Newspaper articles about the event were ordered to be taken down. In reality, Green Trees said, the event was funded by ticket sales by the pianist’s friends. In any event, the sources of funding should never be a reason for harassment against supporters and organizers of an artistic event. The government’s behavior only shows that the environment is a sensitive issue in the eyes of the authorities.