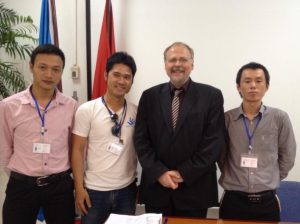 Thanh, who is organizing a training course on activism for young individuals from the southern region, said on Monday’s afternoon he was informed by the trainees that local authorities came to the training site to demand for administrative check. Shortly after coming to a cafeteria nearly at 3.30 PM, he was suddenly attacked by a group of ten plainclothes agents.

The attackers held his arms to his back and started to beat him on his head, breast and back. One of them took his gun and pointed to Thanh’s right ear and shout “I will shot you if you resist. Fuck you that you are training others.” Later, the guy covered Thanh’s head with a shirt and the attackers took him into a car and drove away.

The kidnappers took Thanh to a police station in Tan My district and other police officers interrogated until mid-night. The interrogators, coming from the city’s Police Department and the Ministry of Public Security, questioned him about the training course and other his activities which aim to promote human rights and multi-party democracy.

They also accused him of receiving money from foreign-based groups in order to build forces for overthrowing the regime.

During the interrogation, two of the kidnappers sometime threatened to beat him, Thanh said.

After answering some questions on his personality, Thanh remained silent, demanding his unconditional release.

The police released Thanh at 11.30 PM. Thanh couldn’t use his cell phone to contact with his friends as police put it into water earlier. When Thanh took a taxi, a group of around 20 thugs on ten motorbikes blocked the car and took him out to beat until he collapsed on street. Policemen and militia nearly did not intervene.

Communists have ruled Vietnam for decades and have no plan to share power with others. The Communist Party of Vietnam has ordered the police to take all actions in order to prevent the formation of oppositions.