Chuong is a business owner and lives and works in Ninh Kieu province, Can Tho.

Profile photo source: Chuong’s Facebook account (which was operated by his wife at the time of this writing)

Chuong has been an outspoken critic of the regime since 2016. He has posted opinions on Facebook criticizing the government and their role in the Formosa environmental disaster.

Chuong is married and has a child.

Chung Hoang Chuong was arrested on January 12, 2020, for “abusing democratic freedoms” under Article 331 of the 2015 Criminal Code, most likely for his posts concerning the brutality in Dong Tam commune on January 9, 2020. State-owned newspaper, citing the investigation agency, reported that since 2018, and especially most recently, he has posted 16 articles with “negative content that propagates, attacks, seriously impact upon the rights and interests of the State, the lawful rights and interests of organizations and individuals.” “Specifically,” the newspaper wrote, “the article about the incident against officials on duty that happened on January 9 in Dong Tam commune, Chuong did not know how the situation progressed but still posted misleading information about the armed forces in performance of their duty.”

After Chung Hoang Chuong was held for almost a week, his wife, Nguyen Thao Nguyen, contacted the local authorities to obtain information about his condition. She was informed that the detention period had just been extended and that the authorities were under no legal obligation to notify Chuong’s family. Nguyen said that she will have to consult an attorney. On a separate note, Nguyen also tried to send Chuong some items for personal use, such as his glasses, medicines, a toothbrush, and new clothes; however, all of these items were sent back to her. The public security questioned her about her online posts trying to inform the public about Chuong’s arrest and condition. They also pressured her to sign several papers to promise that she will not post anything about the procedures, the local public authority, or the arrest, either online or elsewhere.

On April 27, the Ninh Kieu District People’s Court in Can Tho City tried Chung Hoang Chuong and sentenced him to 1.5 years in prison on charges of “abusing democratic freedoms” under Article 331 of the 2015 Criminal Code. His wife only found out about the trial 20 minutes beforehand. Chuong did not request an attorney and represented himself before the court. 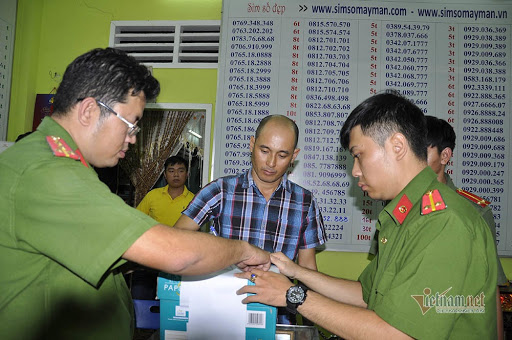 Chuong (middle) with his documents being confiscated 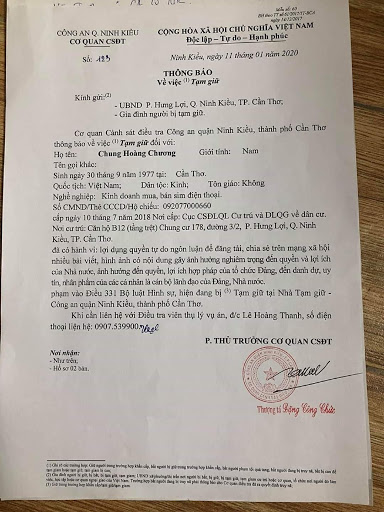 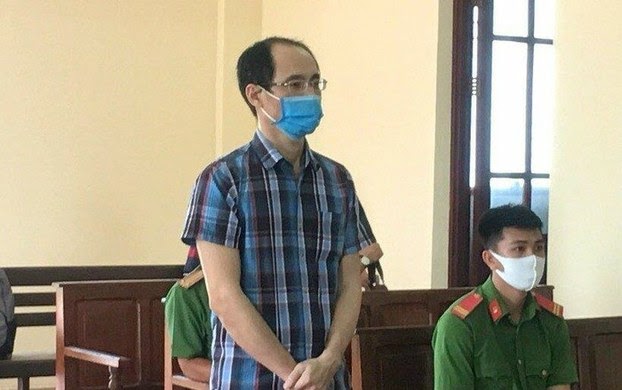