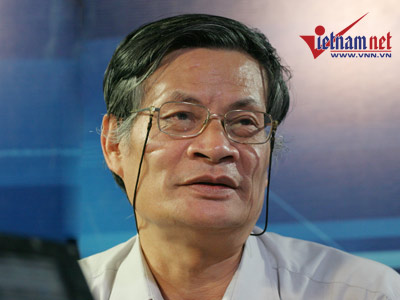 Dr. Nguyen Quang A, a renowned Vietnamese businessman, scholar, and dissident, has launched an appeal to Vietnamese citizens to exercise their right to stand for election in the upcoming National Assembly’s elections of May 2016. He himself just kicked off a campaign to gauge the public support for his own nomination by asking people to sign a public petition to show their support.

LET’S STAND FOR ELECTION TO GRADUALLY TURN RIGHTS ON PAPER INTO ACTUAL RIGHTS AND HELP MR. TRONG PROVE THAT “[VIETNAM] IS DEMOCRATIC AT THE MOST.”*

[*Mr. Nguyen Phu Trong – referred in this article as Mr. Trong, was reelected as the General Secretary of the Communist Party of Vietnam in January 2016. Commenting on the Politburo’s election results, he said “it was democratic at the most, it couldn’t be more democratic.”]

Nguyen Quang A – The elections of the 14th Legislature of the National Assembly will take place on May 22, 2016. Apparently, the Communist Party of Vietnam (CPV) is preparing to nominate 896 candidates (which include 80 members of the Central Committee of the CPV). It is normal for a political party to prepare the nomination of its candidates to compete in the legislative elections. However, in our “democratic at the most” society, this is not quite normal.

Since there are no other political parties to compete agains the CPV, the nomination of candidates is a monopoly power of the CPV and its affiliated organizations. Until now, very few people self-nominate. Besides a handful of people who got implicit approval from the CPV to run for elections, almost all self-nominating candidates got ruthlessly eliminated by the “democratic to the most” procedural rules, despite the solemn guarantee by Article 27 of the Constitution of the right of every citizen who reaches the age of twenty-one to stand for election to the National Assembly.

1. LET’S GRADUALLY TURN THE RIGHTS ON PAPER INTO ACTUAL ONES

The right to self-nominate for election has still been a supposed right. The law on elections should be revised to ensure nobody can take away the right of citizens to stand for election. However, from now until March 13, 2016 (the deadline to submit self-nomination application – 70 days before the election day), there are many things citizens can do to help turning the supposed right into an actual one.

I stress the word “gradual,” because it is probable that self-nominating candidates could still be eliminated from the final candidates list during the “screening” processes [procedures through which affiliated organizations of the CPV meet to decide on the quotas of candidates for each organization and structures of the list of candidates, as well as establishing the final list of candidates for each constituency]. They could even be “denounced” at electors’ conferences according to Article 45 of the Law on Elections No. 85/2015/QH13. And any shortcomings in their private lives would be picked to pieces by the CPV-run newspapers… Many people think the “self-nomination” will fail and it “won’t reverse anything”… But the self-nomination process will show to the people the reality of the “democracy to the most” in our country, will press for meaningful changes in the future, and will help improve the civic standards of the people and of the public officials. I think people who are eligible should run for the coming National Assembly election. Article 3 of the Election Law states that candidates to the National Assembly “should satisfy the criteria for National Assembly deputies as provided for by the Law on Organization of the National Assembly.” According to Article 22 of the Law on Organization of the National Assembly (No. 57/2014/QH13), the criteria are:

1. To be loyal to the Fatherland, the People, and the Constitution, to strive to carry out the renewal cause for the goal of a prosperous people and a strong, democratic, equitable and civilized country.

2. To possess moral qualities, to be diligent, thrifty, incorruptible, public-spirited and selfless, exemplary in the observance of law; to have the spirit and be determined to control corruption, waste and all manifestations of bureaucracy, imperiousness, and authoritarianism and other illegal acts.

3. To possess educational and professional qualifications, to have full capacity, health, work experience and prestige to perform the tasks of a National Assembly deputy.

5. To have the conditions to participate in the activities of the National Assembly.

Anyone who feels they satisfy the five criteria above should feel free to submit their self-nomination application to run for the National Assembly election. If there are 896 people who run as independent candidates against the candidates that are nominated by the CPV, it will be a great thing, and a legal thing.

Such self-nomination will gradually turn the supposed right to stand for election into an actual one. Don’t hesitate, prepare and submit your self-nomination application right away!
…

This is a completely lawful game between the two: we (including reformist members of the Communist Party) and the conservatives who want to take away our rights. In this game (similar to flipping a coin), if the result is HEADS then we WIN (this chance is not high), if the result is TAILS (higher chance), they LOSE. The more they try to obstruct, harass or arrest us because of our lawful action which respects even the current legislation (even when it is not good), the less we are able to help Mr. Nguyen Phu Trong prove the “democratic to the most” nature of the ongoing nomination and self-nomination process, which will be a bitter defeat for them.

Thank-you letter from Mrs. Nguyen Tuyet Lan, mother of Me NamBui Thi Minh Hang’s Letter from Prison to Her Youngest Son (September...
Scroll to top
Our Spring Sale Has Started