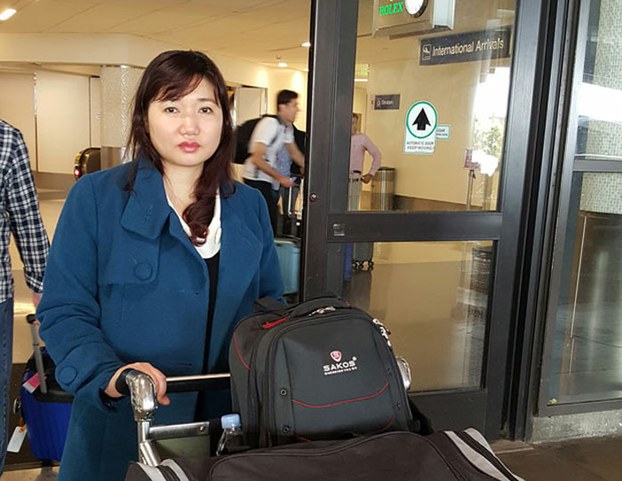 LA TIMES, April 17, 2016 – Her food’s waiting — sizzling onion steak and fragrant catfish — but the woman on a mission does not pause between back-to-back interviews.

Vu Minh Khanh, wife of famed human rights activist Nguyen Van Dai — beaten and imprisoned by the communist government in Hanoi — is determined that the American public and others “outside our community … know his work, his cause.”

“Now that I’m here in this country, I realize even more how much people suffer in my country,” Vu said. “How else can you describe it when you don’t have basic rights?”

Nguyen, a lawyer and blogger, left his Hanoi home in December to meet with European Union representatives in the country to research human rights issues.

Plainclothes officers stopped him and took him back to the house, where a police camera facing the front door monitors all who enter and exit. They confiscated three computers and USB sticks, Vu said. Nguyen was later charged with “conducting propaganda against the state.”

Four months later, authorities have not allowed Vu, other family members or friends to see or contact him, his wife said, adding that they also declined his requests for a lawyer.

International human rights groups, along with elected officials worldwide, have condemned his arrest, attacking Vietnam for its “poor” record of religious persecution, lack of freedom of speech and freedom of assembly.

Nguyen is the founder of the Committee for Human Rights in Vietnam, which trains human rights attorneys and promotes legal education. He has traveled from city to city, teaching young people how to report human rights violations and handle police interrogations.

In 2013, he launched the Brotherhood for Democracy with former jailed dissidents to coordinate human rights activities across Vietnam and to host forums in Hanoi and Saigon to mark International Human Rights Day.

“He’s one of the people who can do things. He’s organized. His activities back up his beliefs,” says Nancy Nguyen, a restaurant owner from Anaheim who reached out to help Vu, scheduling her Southern California meet-and-greets. She is assisting VOICE, the Vietnamese Overseas Initiative for Conscience Empowerment, a global nongovernmental organization that helped set up Vu’s visit.

Hoi Trinh, VOICE’s founder, said Nguyen has done “nothing wrong.” In any democracy, what he accomplished “would be encouraged, commended and honored. Not thrown in jail without trial to this day.”

Brandon Hoang, a programmer from Santa Ana, is an ardent Nguyen admirer.

“I follow what he does online,” Hoang said. “Even though he is oceans away, I respect what he stands for, and I hope that here in America, others will also respect that and spread his gospel.”

Vu received a hero’s welcome after managing to sneak out of her country to rally supporters in the nation’s largest Vietnamese American community. In her loneliest, darkest hours, the church volunteer said she relies on her faith.

“I think and believe in the powers of God. If I become frail, it weakens the purpose,” she said of her resolve, as she prepared to field questions from a journalist with the BBC. She planned to follow that interview with a trip to Washington to try to persuade lawmakers familiar with the expatriate push for human rights and religious freedom to intervene in her husband’s case.

Late in the week, Vu sat with immigrant fans in a popular French-Vietnamese restaurant in Little Saigon, where a waitress approached, holding a Vietnamese-language newspaper with her picture on the front page. She struggled to maintain energy while the others ate lunch — the 15-hour time difference between her homeland and California had left her with little sleep the night earlier.

This is the second time officials have jailed her husband. Authorities tried Nguyen in May 2008, sentencing him to five years in prison under the same propaganda charges. In 2011, he was released to house arrest for an additional four years and barred from practicing law.

Before leaving Southern California, Vu expected to be the featured guest at a Little Saigon town hall meeting, promoting her husband’s activism. “Dai always tells me: ‘We want to live a life with meaning — not just for us but for those around us.’ That’s why we continue to do what we do.”

The Repression of Female Activists in VietnamOfficial Launch of “Anh Ba Sam” Book in Ha Noi before the Prominent Blogger’s...
Scroll to top