Le Trong Hung’s wife, Do Le Na, wrote on her Facebook page that she received a surprise phone call from her husband on June 16. The conversation lasted about 10 minutes. Hung gave her a list of items to bring for the next visit, including medicine for his eye and skin conditions and ramen noodles. He also asked for writing utensils and copies of the Constitution. Hung said he discovered there were legal errors in his appeals trial and that he will demand a retrial.

On June 18, the visually-impaired Na and her two children traveled all night to Thanh Hoa Province to visit Hung. The meeting lasted about one hour. Hung told Na that at this new prison he is allowed three meals a day instead of two, but his eye conditions continue to deteriorate. At the end of their meeting, Hung was allowed to hug his family for a few seconds, Na wrote.

Hung was a founder and has worked as an independent journalist at Chấn hưng Việt Nam TV’ (CHTV) for four years. He focuses on supporting land petitioners, guiding related legal procedures, and disseminating information to the public.

In a heartbreaking Facebook post, Le Trong Hung’s wife, who is legally blind, spoke about the hardship she must endure taking care of their two young children while their father is in detention.

Watch our interview with Do Le Na, with both English and Vietnamese subtitles, here, to understand more about who Hung is and what motivates him to do his work and run for the elections, as well as the challenges that his family is facing.

Le Trong Hung’s wife, Le Na, reported that her 10-year-old child has been followed around by secret police. A classmate of his has been spreading rumors about his father. Several adults in the neighborhood stopped him outside the house and asked if his father was “mentally ill.” She said these subtle forms of psychological attacks are causing the child to withdraw, and she fears they will cause long-term harm to his development. Read the full text of the letter here.

Do Le Na, Le Trong Hung’s wife, wrote a letter thanking the UN and other international human rights organizations for helping her in the fight for justice for her husband.

Hung, also known as “Hung gan,” is an independent journalist with a long history of activism. He is one of a few journalists (alongside other members of CHTV) within the country that dare to be involved in grassroots issues and land disputes with the authorities. CHTV has been a target of state media since 2018.

Hung first confirmed his candidacy for the upcoming National Assembly Election on March 14 via his Facebook account. Two weeks later, on March 27, Hung was arrested and his house was also searched by the Investigating Agency of the Public Security of Hanoi. They charged him under Article 117 of the 2015 Criminal Code.

Do Le Na, the visually-impaired wife of Le Trong Hung, told The 88 Project that when she brought supplies to her husband at Prison Camp No. 1 she was told to wait. After about half an hour someone gave her a written note allegedly signed by her husband that said he no longer would accept money or supplies from the family. Being blind, Na was unable to verify if it was her husband’s signature. A friend of Hung, who accompanied her, did not know his handwriting, and so he also could not confirm. Na suspects that her husband might be on a hunger strike. Read more about her concerns about Hung’s situation in her open letter to the international community.
Also, watch our interview with Do Le Na, with both English and Vietnamese subtitles, here, to understand more about who Hung is and what motivates him to do his work and run for the elections, as well as the challenges that his family is facing.

On Election day, Do Le Na was given a citation for not going to the polls in the National Assembly election. Na said that she was harassed for days by election enforcers who called, sent messages, and then finally showed up at her house with the citation, which she could not read due to her condition. They demanded that she cast her ballot.

Le Trong Hung’s wife said that on October 26 her husband met his lawyer for the first time since his arrest in late March. He asked for a copy of the Bible and 50 copies of Vietnam’s Constitution to give to prison guards and officials. On October 29, the visually-impaired woman brought the books to the detention center, but the guard at the front desk refused to let her see her husband or give him the books, so she had to take them home.

Earlier in the month, his wife went to the detention center No. 1 in Hanoi to bring him warm clothes, but was told her husband did not want to receive anything from outside. On her Facebook post, Na said the guard told her that her husband said he would only accept old clothes, but no money. She said that he had only accepted the 1.5 million dong that she sent to him six months ago, but nothing else, saying he didn’t want to “bite into her meager teacher’s salary.”

Do Le Na, the visually-impaired wife of Le Trong Hung, said that her husband was allowed to see his lawyer, Ha Huy Son, on November 22 and reported that his eyesight had gotten worse since his detention in March. She also claimed that even though her husband is not physically abused, he has been discriminated against as some of his basic requests, such as for books, are routinely denied.

On New Year’s Eve, a court in Hanoi sentenced Le Trong Hung to five years in prison, plus five years probation. Hung was charged with conducting “anti-State propaganda” for distributing copies of the Constitution and advocating for independents running for seats in the National Assembly. The trial lasted less than four hours, during which Hung’s visually-impaired wife, Do Le Na, was not allowed into the courtroom.

She recently gave an update on Hung’s poor health condition. Hung’s lawyer said his client would appeal. Na sent out a plea for help as her home was being surveilled, her in-laws have been bombarded with misinformation, and she has been harassed at her workplace.

Hung’s trial was originally scheduled for December 16, then delayed until the 31st, according to his wife, who was notified of the change by Hung’s lawyer. The reason given was scheduling conflicts.

On March 18, 2022, Do Le Na, wife of Le Trong Hung, visited the prison to see him on his first anniversary in jail. She was not allowed to meet with him in person but was able to give him some food and necessities. Na shared on her Facebook account that she and her friend were treated nicely by the prison guards.

An appellate court upheld Le Trong Hung’s five-year sentence in a trial that took place on April 19 without his family’s knowledge. Hung’s wife, Do Le Na, didn’t know that there would be an appeal trial, so she never made arrangements for Hung’s lawyers to be there. Visually impaired, Na had to go to the prison three days later to confirm the news.

According to lawyer Ha Huy Son, Vietnam’s current law does not require the court to notify the family of the accused about trial dates. Typically, family members of political prisoners can tell something is up if they suddenly see police posted around their house to prevent them from leaving. In Do Le Na’s case, however, she didn’t see anything and was only alerted about it later by a relative whose house was guarded. Hung’s wife was later told by her husband during the most recent visit, the first time they had seen each other since he was arrested 389 days before, that he was forced to have this appeal trial against his will.

Do Le Na and Hung’s mother, were able to visit him on April 22 for the first time since his arrest. Read her moving letter recounting the visit here.

Do Le Na, the visually impaired wife of Le Trong Hung, took her two sons to visit their father on May 15 as scheduled. But when she got there she was told the schedule was changed, without being given a reason; she was told to come back the next day, which she did. Finally, after 411 days the children were able to see their father for the first time in a brief 30-minute visit. Hung reported he had contracted Covid earlier but was coping well; he said he was also suffering from back pain. Hung mentioned he was not eating food that she bought from the canteen out of concern that prison officials might spike it with drugs in an effort to send him to a psychiatric hospital.

Do Le Na, the wife of Le Trong Hung, sent a letter to several UN Human Rights organizations seeking help to get her husband released. Hung tried to run as an independent for a seat on the National Assembly and was arrested in March. Na told RFA “I would also like people living in Vietnam—and especially the families of detainees who don’t dare to speak up—to know that it is everyone’s right to speak out against injustice, and that we shouldn’t be afraid of [the government] if we are in the right.” 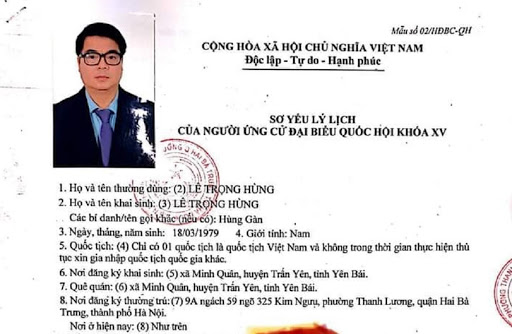 Family Permitted Visit After Political Prisoner Forced to Attend Appeal Trial: An Update on Le Trong Hung’s Life in Prison, The 88 Project, May 2, 2022