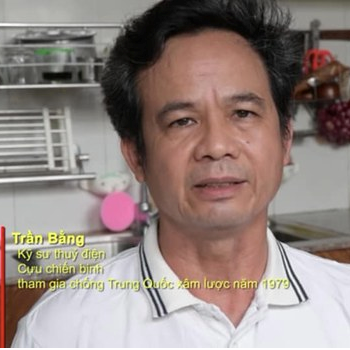 Tran Van Bang is an engineer and a veteran who joined the 1979 Sino-Vietnam Border War against Chinese expansionism. Bang lives and works in Ho Chi Minh city.

Tran Van Bang is a pro-democracy activist and a local dissident who is deeply concerned about Vietnamese social and political issues. He is also a member of the Le Hieu Dang Club, a community organization advocating for democracy and the protection of Vietnam’s sovereignty. Bang attended several anti-China protests in Vietnam. In 2015, he was assaulted by local public security forces at a rally in Ho Chi Minh City protesting China and Xi Jinping’s visit to Vietnam.

Tran Van Bang received a summons dated February 25, 2022 by the Ho Chi Minh city public security, requesting him to be at the Investigating Agency Office (in District 1) on March 1. It is reported that he did not comply with the summons.

On March 1, state media reported that Ho Chi Minh city public security arrested Tran Van Bang at his house. He is accused of “storing, making, and posting online materials that propagandize, distort, and defame the Socialist Republic of Vietnam” under article 117 of the 2015 Criminal Code.

According to state media, Bang’s Facebook posts had “intended to defy the government and negatively affect social security and order.” The authorities also declared that they searched his house and found “a number of books and materials containing anti-state information.”

Following Bang's arrest, one of his lawyers, Dang Dinh Manh, shared on his Facebook that Tran Van Bang signed a contract with the lawyers before his arrest. On March 5, lawyer Dang Dinh Manh confirmed that the registration to defend his client had been approved within 24 hours. It was unprecedented, as Vietnamese lawyers usually face difficulties in the registering procedures required by law enforcement.

On March 11, Tran Van Bang was transferred from the District 12 Detention Center to Chi Hoa prison without informing his family. The family only found out about the transfer on March 15 when they visited the detention center in District 12.

In an interview with RFA on February 17, 2022, Bang shared that due to his health problems, he had closed his Facebook account since December 26, 2021. He is facing severe eyesight issues and finger myositis. 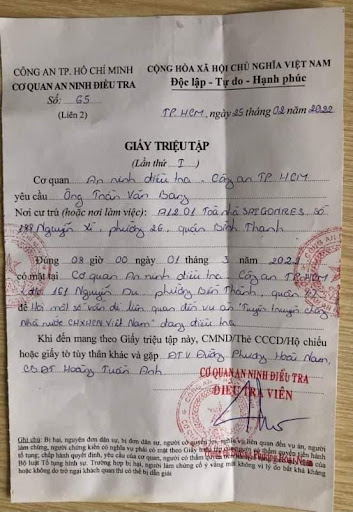 Tran Van Bang's summons paper that was shared on Facebook