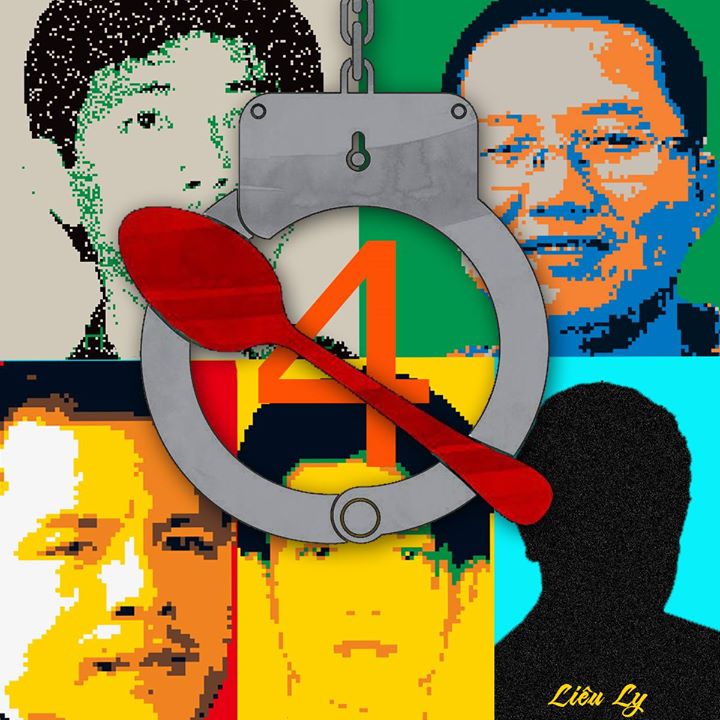 Trần Huỳnh Duy Thức’s family, on the Facebook page dedicated to their family member, political prisoner Trần Huỳnh Duy Thức, reported that Thức and four other political prisoners – Nguyễn Hoàng Quốc Hùng, Trần Vũ Anh Bình, Đinh Nguyên Kha, and Liêu Ly have been on a hunger strike since March 11, 2016. According to the Thức father, Mr. Trần Văn Huỳnh, the prisoners’ act aims to protest the prison’s administration for the latter’s disregard of the law and arbitrary treatment of prisoners in violation of the Constitution and the law. Specifically, they protest against two prison cadres:

These cadres have arbitrarily prohibited the political prisoners from taking simple and human actions, without providing any legal basis or rationale for such prohibition. For example:

– The cadres prohibited Nguyễn Hoàng Quốc Hùng from receiving from his family a copy of the application for the appeal of his own case.

– The cadres prohibited Nguyên Kha from sharing food with his fellow inmate Đặng Xuân Diệu. They obligated Nguyên Kha to submit an application for a permission to do so, and disciplined him with a “warning.”

– In the case of Trần Huỳnh Duy Thức, he was not allowed to send the letters No. 61A and D to his family, and his formal complaint about this was not allowed either. In letter 61A, Thức wrote about the Prime Minister’s letter on the accession to the TPP prior to the latter’s visit to the United States. Thức appealed to the Vietnamese people to support the Prime Minister’s positive point of view. Yet such a letter was not allowed to be sent. The cadres simply stated that they obeyed the command of their superiors, and neither explained the rationale nor provided the legal basis for such prohibition.

When Thuc called his family on the phone, the call was interrupted when human rights were mentioned. Cadre Nguyễn Văn Bộ, I.D. 082686, could not explain why he disallowed such a topic and which rule his action was based on.

– In the case of Trần Vũ Anh Bình and Nguyễn Hoàng Quốc Hùng, they were transferred to solitary confinement cells simply because they had protested against the installment of a camera in their cell. Such video surveillance was an intrusion on the privacy of their daily personal activities. Yet they were punished and held in solitary confinement because of their well-grounded protest against such intrusive move.

– Liêu Ly is a Khmer ethnic inmate from Sóc Trăng who was just transferred to Xuyên Mộc prison. He also faced arbitrary treatment and joined the others in this hunger strike.

Please share this information to support and protect these Vietnamese political prisoners!