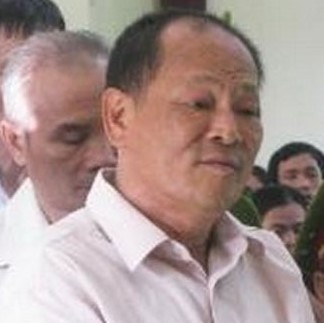 Please share this call with your network and representatives to raise awareness for Phan Van Thu, leader of the Buddhist group An Dan Dai Dao, who is serving a life sentence in prison for his religious and social work. Thu is suffering from multiple health conditions and desperately needs medical attention.

This week, we have an update from Phan Van Thu's family about his current situation in prison. He continues to suffer from multiple health ailments and a restrictive visit and supply policy; these situations are made even worse by the current coronavirus situation, as family visits and the receipt of supplies from families at his prison have been suspended for the month of March. Read the full update, here.

Phan Van Thu is the founder and leader of An Dan Dai Dao, a Buddhist sect founded in 1969 but outlawed after the Communist regime took over South Vietnam in April 1975.

Phan Van Thu founded An Dan Dai Dao, a Buddhist sect, in 1969 in South Vietnam which had 14 temples, hundreds of monks, and thousands of followers. After the fall of Saigon, the communist government outlawed the group, repressed their activities, and confiscated all the temples and teaching materials. Phan Van Thu and his disciples fled to the jungle, but he was arrested in August 1975 and held in solitary confinement for 5 years before being transferred to a prison in Phu Yen province. In 1983, he was released and sent to the economic zone Mai Lien, Phu Yen province, in probation. He escaped from the economic zone and fled to Dong Nai province with a few disciples to continue his religious practice. There he changed his name to Tran Cong. Still wanted by the government, he moved frequently to different regions, and finally settled in An Giang province, before returning to Phu Yen province in 1993. In 2003, he appointed a disciple to start an eco-tourist company at the Da Bia Tourist Resort in Phu Yen Province. They signed a contract with the local authorities to engage in protecting the forest and environment.

The group believed in the prophecies of Nguyen Binh Khiem, a 16th century oracle or Vietnamese equivalent of Nostradamus, and dreamed of building a new “Utopia” in which science, nature and humankind would be harmoniously balanced. They organized conferences and produced leaflets to disseminate their beliefs. According to reports in the state-run media, the group had several hundred members and sections in several central and southern provinces.

Vo Thi Thanh Thuy, A Letter to Human Rights Organizations from the Wife of a Man Sentenced to Life in Prison, Defend the Defenders, October 27, 2014

Phan Van Thu is one of 22 members of An Dan Dai Dao Buddhist sect arrested in February 2012 under Art. 258 and tried under Art. 79 of the 1999 Penal Code by Phú Yên People’s Court in January 2013, in what is called the "Council for the Laws and Public Affairs of Bia Son" affair. The group was charged with subversion and accused of writing documents critical of the government, setting up two companies and investing in an eco-tourism park as a cover for recruiting supporters. However, those affiliated with the group maintained that the activities of the group were purely religious and that the authorities interpreted their religious teaching in political terms. Human rights groups and supporters consider the arrests a repression by the State of the peaceful religious group.

Arrested on February 5, 2012, he was sentenced to life in prison under Art. 79. This is the heaviest sentence ever given under this article. He suffers from poor health.

Prison authorities at Gia Trung prison camp were refusing to provide Phan Van Thu with medical treatment, despite having diabetes, arthritis, hypertension, and being in heart failure. He was being housed with Nguyen Trung Ton, who was also suffering from untreated health issues after a brutal attack from unknown thugs with special police equipment in February 2017.

Phan Van Thu's wife has reported that several members of the jailed group the Council for the Laws and Public Affairs of Bia Son are in very poor health. Thu's family has filed to suspend his sentence on medical grounds, but authorities denied their petition. In addition, fellow member Doan Dinh Nam is in ill health and receiving prison-supervised dialysis. Members of the group are now appealing to the international community for support in their cases.

On October 5, political prisoner Doan Dinh Nam died from kidney failure; he had only recently been moved from prison to a hospital for further treatment, despite many requests for treatment from his family. An Dan Dai Dao's founder, Phan Van Thu, has been suffering from poor health in prison. Read our report on the lack of medical treatment for imprisoned members of the An Dan Dai Dao Buddhist sect, here, in which we interviewed Mr. Thu's daughter-in-law for the latest update on his and other members' situation.

In 2014, Phan Van Thu's wife, Ms. Vo Thi Thanh Thuy, sent a letter to international human rights organization to tell the story of An Dan Dai Dao, the arrest and trial of 25 members of the group

International Commission of Jurists took action for the 21 imprisoned members of the An Dan Dai Dao Buddhist sect by sharing an open letter calling for improved access to healthcare for the group during the COVID19 outbreak and the release of high risk prisoners. The ICJ stated that, “The failure to provide necessary treatment to the detainees leaves them vulnerable to deterioration of serious pre-existing medical conditions – in violation of the State’s obligations to protect their rights to health, humane treatment, dignity, life and freedom from torture and cruel, inhuman or degrading treatment.”

Highlights of the afternoon session included discussion of how Hong was arrested and assaulted and her three-week hunger strike while in police custody. Ngoc Dien described the government’s relentless attacks on her religious group, including the takeover of the land they were using to build an ecopark, and the mistreatment of her father-in-law, who is suffering from ill health in prison.

The 88 Project created this call to share with your network and representatives to raise awareness for Phan Van Thu, leader of the Buddhist group An Dan Dai Dao, who is serving a life sentence in prison for his religious and social work. Thu is suffering from multiple health conditions and desperately needs medical attention.

Update on Imprisoned Members of An Dan Dai Dao Buddhist Sect: Lack of Medical Treatment Results in Death and Prolonged Suffering in Detention, The 88 Project, November 13, 2019