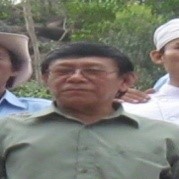 On October 5, Doan Dinh Nam passed away in prison at Xuyen Moc Detention Center. He died of kidney failure. It is reported that the family asked prison authorities to send his body home for a funeral, but they refused the request.

An Dan Dai Dao's founder, Phan Van Thu, has also been suffering from poor health in prison. Read our report on the lack of medical treatment for imprisoned members of the An Dan Dai Dao Buddhist sect, here, in which we interviewed Mr. Thu's daughter-in-law for the latest update on his and other members' situation.

Doan Dinh Nam was in a dangerous health situation, with damaged kidneys. Therefore, his family sent a request to cancel his sentence and allow him to be taken care of in the last days of his life and die at home. However, instead of approving their request, the public security of Phu Yen Province went to their house and threatened them to not attempt to generate support for Nam. Nam’s family is so poor that they were hardly able to visit him in prison.

Fellow political prisoner Phan Van Thu's wife has reported that he is also in very poor health. Thu's family has filed to suspend his sentence on medical grounds, but authorities denied their petition. Both Nam and Thu are members of the Council for the Laws and Public Affairs of Bia Son.

Doan Dinh Nam is a member of An Dan Dai Dao, a Buddhist sect founded in 1969 but outlawed after the Communist regime took over South Vietnam in April 1975.

Update on Imprisoned Members of An Dan Dai Dao Buddhist Sect: Lack of Medical Treatment Results in Death and Prolonged Suffering in Detention, The 88 Project, November 13, 2019

He was sentenced to 16 years’ imprisonment with five years’ house arrest on release. He is currently held in Section K3, Prison T345 in Xuyen Moc District, Ba Ria- Vung Tau Province, and suffers from poor health.