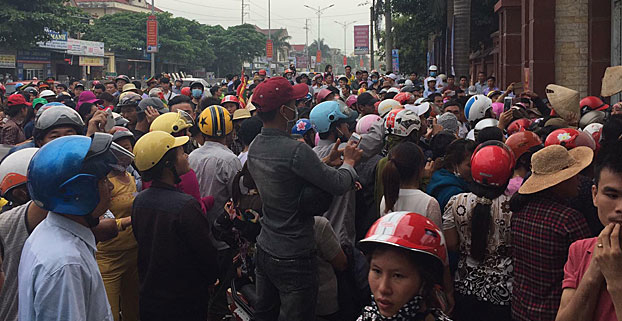 Greetings from Huong, Ella, and Kaylee from The 88 Project! We are bringing to you news, analysis, and actions regarding human rights and civil society in Vietnam during the week of April 24 to 30. We are thinking of bloggers Nguyễn Ngọc Như Quỳnh and Trần Thị Nga as April 28 marked Quỳnh’s 200th day in detention and Nga’s first birthday spent in jail. Vietnam received dismal ratings in both Reporters Without Borders’ 2017 World Press Freedom Index and the U.S. Committee on International Religious Freedom’s 2017 Annual Report. Civil society groups in Vietnam issued a petition asking the government to reform land policies in the wake of the violent clash over land in Đồng Tâm. “No-Formosa” t-shirts were confiscated by the police in Quỳnh Lưu, Nghệ An province, which caused a thousand people to surround the police station to demand an apology. And, apparently, the Montagnard asylum-seekers were forcibly returned to Vietnam, contrary to previous assertions by the Cambodian government and the UNHCR that the returns were voluntary. Last but not least, please take action for Trần Thị Nga and Nguyễn Ngọc Như Quỳnh and please continue to monitor their situation.