The 88 Project: On May 2, Lê Mỹ Hạnh, a female environmental activist from Hanoi, and her friends were beaten by a group of government loyalists in Ho Chi Minh city when she was visiting the city and staying at her friends’ private residence. In a video shared on social media after the incident, Lê Mỹ Hạnh recounted that a group of five people, including one woman, knocked on the door during the afternoon of May 2. As one of her friends opened the door, the woman quickly sprayed pepper spray in her face and the group entered to attack the three women in the face with more pepper spray, shoes, and a helmet. Hạnh herself was knocked unconscious. 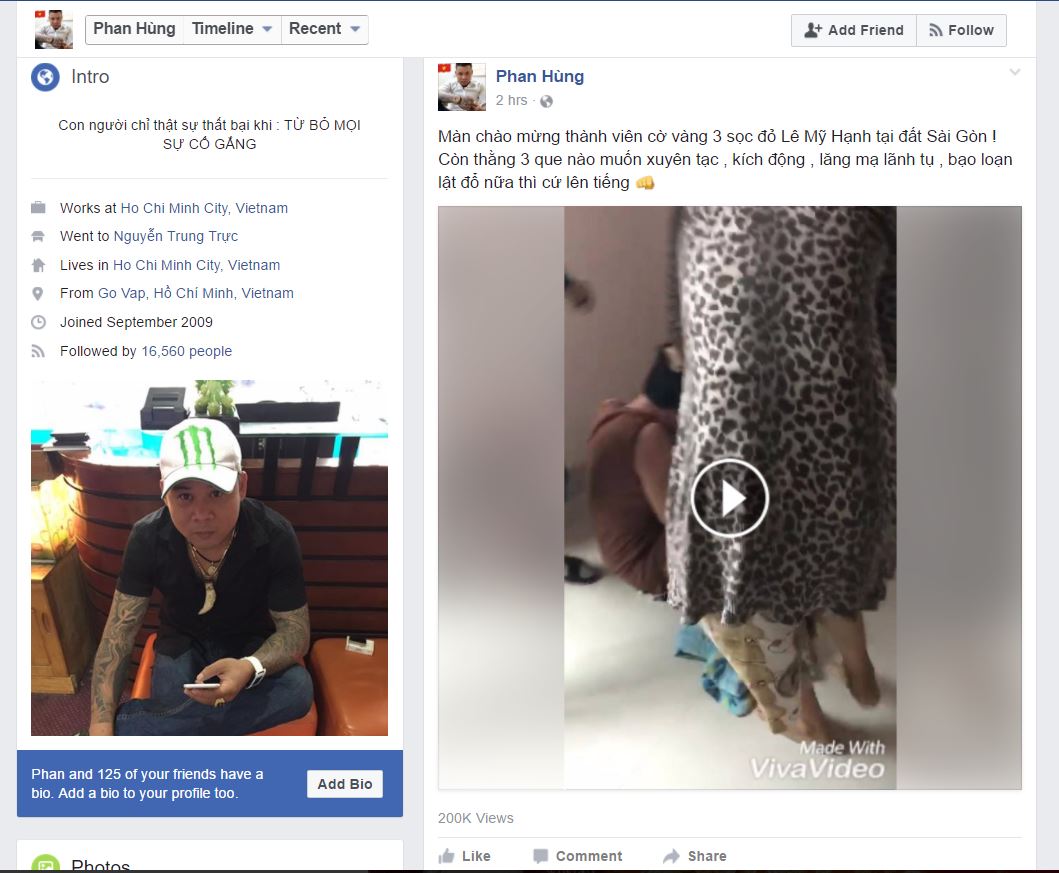 Screen capture of a government loyalist’s Facebook page, the loyalist posted the assault video with an explicit message to threaten activists.

Disturbingly, one of the attackers, named Phan Hùng, filmed and posted the video of the assault on his Facebook page with a threatening rant: “This is to welcome the yellow with three red stripes flag [former Republic of Vietnam’s flag] member Lê Mỹ Hạnh in Sài Gòn! Any other three stripes guys [supporters of the old regime] wanting to distort, invile leaders, incite riots and subversion, feel free to speak out.” (See the screen capture above). Clearly, the motive behind the attack was political. Hạnh and her friends were targeted because of their pro-human rights, pro-democracy political opinions. Just one month ago, Lê Mỹ Hạnh and Trịnh Đình Hòa had also been attacked in Hanoi as they were conducting a live stream on Facebook to talk about the environmental disaster cause by Formosa in the Central region of Vietnam.

Lê Mỹ Hạnh and her friends have reported the attack to police of the 2nd District of HCM City. But according to lawyer Lê Công Định, the local police tried to persuade her friend to drop the complaint against the attackers because “the injuries were not serious.” This raises the question of the connection between the attackers and the police themselves: why would the local police not want to investigate this serious case of infringement upon a citizen’s private residence and intentional infliction of injury on other persons (Arts. 124 and 104, respectively, of the 1999 Criminal Code)?

On May 3, 21 independent civil society organizations and 20 individuals issued a statement to raise their voices in opposition to the repression of peaceful dissidents and the violence used towards activists. They declared that “The people have the constitutional rights that are protected by the law to speak out their concerns about the country’s situations and their objections [to government’s policies]. The State has the duty to ensure the safety for the citizens in expressing their opinion.” They also appealed to the government “to end propaganda activities that incite violence, as well as to promptly handle the organizations and individuals who openly incite violence, repress, and slander Vietnamese citizens, such as the owners of the Facebook pages Tô Lâm, Trần Đại Quang, and Phan Sơn Hùng.”

Violence against human rights and pro-democracy activists has been rising in the last few years. According to the Former Vietnamese Prisoners of Conscience (FVPOC) association’s 2015-2016 human rights report, although the number of arrests has decreased, there have been significantly more violent assaults against dissidents and human rights defenders. It is widely believed that the attackers are either plainclothes police or thugs who work for and/or are tacitly condoned by the government, as it is unclear how or if the authorities have investigated into the attacks against dissidents at all.