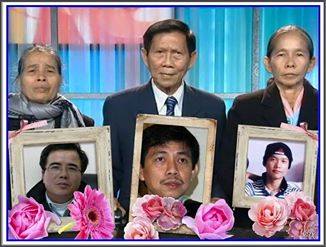 This coming January 20th marks six years since Tran Huynh Duy Thuc’s trial. Three other dissidents who were tried at the same time– Le Cong Dinh, Nguyen Tien Trung, and Le Thang Long have been released. Thuc remains in jail as he received the longest sentence – 16 years of imprisonment and 5 years of probation. The struggles of Thuc in prison and of his family to defend him and advocate for his release continue.

In prison, Thuc continues to advocate for the rights of prisoners. Recently, Thuc and fellow prisoners requested the right to access and comment on the drafting of the criminal code, prior to its adoption on November 27, 2015. The prison authorities refused to accommodate their requests, under the rationale that “prisoners are not citizens.” Dinh Nguyen Kha, another political prisoner who is held in the same prison as Thuc, told his mother that Thuc was mistreated in jail because he stood up for the rights of the prisoners. Indeed, the prison authorities have been making Thuc’s communication with his family, as well as his access to information, very difficult.

Since October 2015, the prison administration has placed a glass partition between Thuc and his family when they visit, forcing them to talk through a phone. This was a disappointment for Thuc’s family, who always came in a big group (10 family members at a time), sat together with him, and gave him some family ambiance only one hour a month. Now with the glass partition which prevents any contact, each of his family members must talk to him separately on the phone. Thuc’s family refused to use the phone, and instead they talked loudly so that the other side of the partition could hear. His family presumes that it was built mainly to prevent direct gestures of affection between Thuc and his family, as well as to make it easier for the authorities to record their conversations through the phone.

November 29, 2015 was Thuc’s sixth birthday in prison. His family released on the Internet a short voice message from Thuc, in which Thuc encouraged people to confidently exercise their human rights. In December 2015, when the family came to visit, the prison authorities received them in a heavy atmosphere and threatened that their right to visit could be suspended because of the release of the recording on the Internet. When the family tried to tell Thuc an important message through the phone, the wardens announced that the phone was not working and they could not use it. Only after Thuc’s family protested and told the prison authorities that they would let the international community know about this mistreatment did the authorities let the visit continue.

Thuc’s family shared on their Facebook page for Thuc that Thuc is in good health and spirits and determined in his beliefs. Thuc should not be imprisoned in the first place, however. To quote Thuc’s message on his sixth birthday in jail: “However well the criminal code is revised, if there are still judicial sentences that imprison people for ‘activities aiming to overthrow the people’s government’ only because a person advocates for a better government, people will not be able to exercise their human rights and will remain in fear.”

Vietnam’s legal reforms remain useless if people like Thuc continue to be harassed and imprisoned. Vietnam’s commitment to international human rights remains empty if domestic law allows the government to persecute citizens because of their expression and activities advocating for peaceful changes.

Thuc is not forgotten. Actions are still being taken all over the world for his release. Please contact us if you want to join the global forces in demanding justice for Thuc.