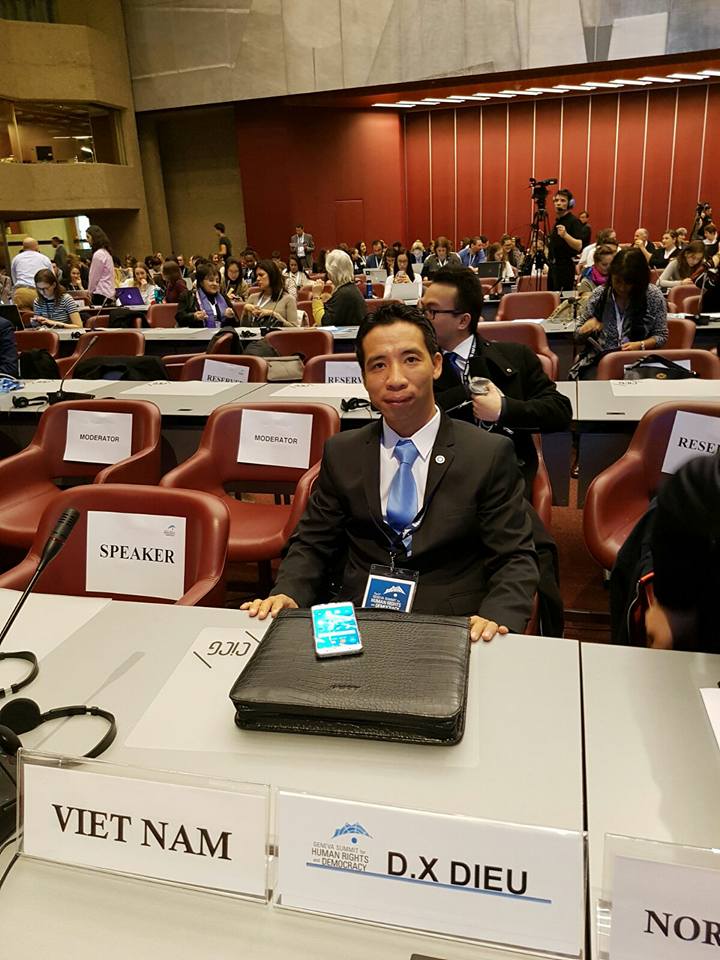 Vietnam Right Now, February 21, 2017: A recently exiled Vietnamese activist has told an international gathering in Geneva that he suffered persistent physical and psychological abuse during his six years in jail.

Dang Xuan Dieu said he was periodically shackled, held in solitary confinement, and abused by other prisoners, after being convicted of plotting to overthrow the government.

The political and religious rights activist was released last month after agreeing to go into exile in France. He had served six years of a thirteen year sentence.

“Prisoners were seen as hostile if they refused to cooperate with the prison authorities,” said Dieu in a speech to the Geneva Summit for Human Rights and Democracy.

“The prison officer’s will was seen as god’s will and prisoners had to bow down like children. I was labelled as dangerous and destructive because I tried to lobby for better conditions,” he said.

Dieu had been convicted of subversion, under article 79 of the penal code, for his work as a reporter with the Vietnam Redemptorist News, an outlet run by Catholic priests and other activists in Ho Chi Minh City.

He was also accused of being a member of Viet Tan, the overseas based Vietnam Reform party, which campaigns for democracy in Vietnam, but which the authorities periodically denounce as a terrorist group.

Dieu said he was subjected to sustained abuse because he refused to acknowledge that he was guilty of any crime, and refused to wear what he saw as the uniform of a common criminal.

“I was forced to share the cell of a murderer, who tormented me and treated me like a slave. I appealed for a transfer but the wardens kept me there for another three months until my health began to collapse,” he told the gathering.

He said he was also kept in solitary confinement for extended periods without adequate clothing in the cold weather, and was denied clean water to brush his teeth and wash.

Dieu said he felt obliged to go on hunger strike on a number of occasions to try to press his demands for better treatment.

He said he was frequently moved to different prison camps and different cells, and was finally sent to a camp in the south, 1500 kilometres from his home, so that family members found it hard to visit.

Dieu was eventually told that he would have to leave the country for France if he wanted to be released early. He told the Committee to Protect Journalists (CPJ) that he was reluctant to accept, but felt he had no choice because of his poor health.

The activist said that he would still be in prison today if not for international pressure to secure his release. He called on the international community to continue to put pressure on the Vietnamese government to release the scores of independent bloggers and other activists still being held.