Bui Manh Tien was released from prison after completing his sentence.

The People's Court of Chi Linh City, Hai Duong officially announced the implementation notice of Bui Manh Tien's sentence on November 18, 2020. Tien will have to carry out the 12 months of imprisonment and be released no later than November 25, 2021. Up to this point, he had been on probation.

The final judgment against Tien, and another BOT activist, Dang Thi Hue, was made in July by the People's Court of Ha Noi.

On July 30, the People’s Court of Hanoi reduced the prison sentences of Bui Manh Tien and Dang Thi Hue by three months each.

Tien was born in 1983 and lived in Chi Linh city, Hai Duong province. He had been working as a driver and never had any criminal record before the 2019 arrest.

Tien is a part of the nationwide protest movement against the installation of toll booths across the country as the result of Build - Operate - Transfer projects (BOT projects). Many have criticized the locations of these toll booths, alleging that they are being charged with or without using the new road built by BOT companies. They also believe that this lucrative business (which can generate billions of Vietnam Dongs per day - approximately 50,000 USD to 100,000 USD per day) is corrupted by cronyism.

Tien often accompanied Dang Thi Hue when they drove through the Bac Thang Long-Noi Bai BOT and refused to pay the toll fee. Hue would be the one who recorded the reactions of the officers in charge at the toll, and Tien was in charge of the steering wheel. After several times doing this, they were arrested by Soc Son’s Police Department on October 16, 2019.

On May 8, 2020, the People’s Court of Soc Son district convicted two anti-corruption activists, Dang Thi Hue and Bui Manh Tien, on the allegation of “causing public disorder” under Article 318 of the Criminal Code. Tien was sentenced 15 months to prison and would have to serve his sentence after seven days of probation. According to the indictment, Tien and Hue were charged for not obeying the rules on toll fees and wrongly stopping their vehicle, which caused disorder at the BOT managed by Vietracimex 8. According to their lawyer, Le Dinh Viet, Tien and Hue were driving on a road which was not supposed to be charged with tolls, per the agreement between the Vietracimex 8 and the Directorate for Roads of Vietnam. However, the court didn’t take this argument into consideration. 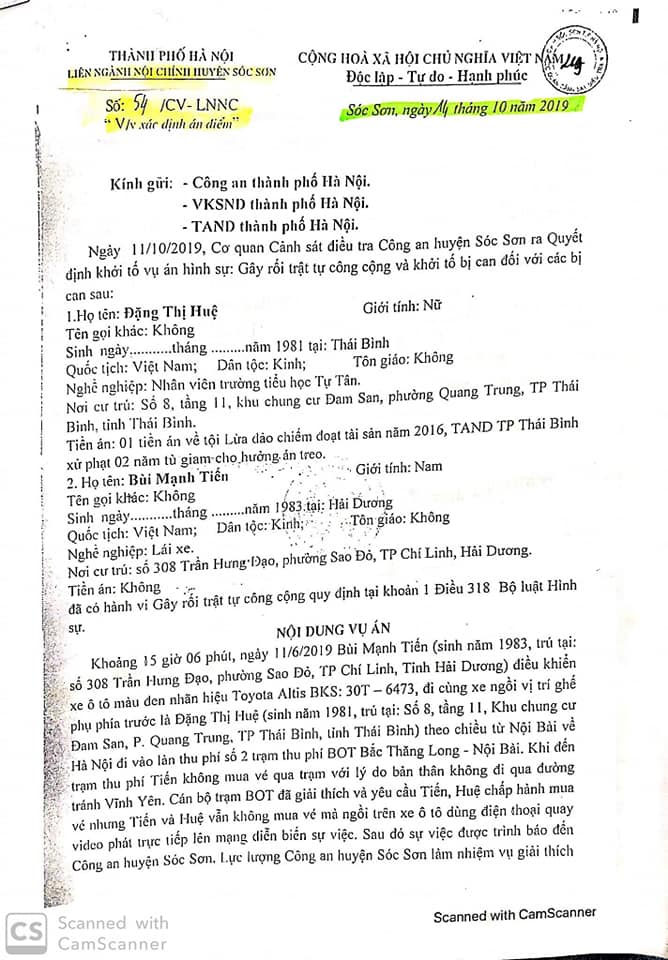 This is an official document from the Soc Son district’s Internal Committee to Hanoi Police Department, Hanoi People’s Court and Hanoi and Hanoi People’s Procuracy. This document decided that the BOT case should be a pivotal case that requires special attention from the Hanoi government. The document presents details about personal information of Dang Thi Hue, Bui Manh Tien and what their actions were to be prosecuted. This is only part of it. The whole document was posted here: Vụ án Huệ Như chống BOT bẩn làm lộ rõ quy trình “án bỏ túi”, Báo Tiếng Dân, May 9, 2020