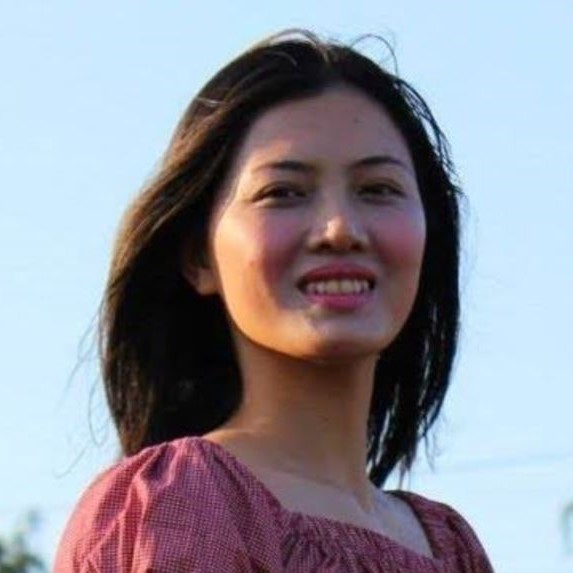 Huynh Trong Hieu, brother of Huynh Thuc Vy, told The 88 Project in an interview that the family strongly believes that Gia Trung Prison officials “gave the green light” for other inmates to physically assault his sister in October. Both officials and Vy told him that the prison set up a “people’s court” of about 100 inmates to “denounce” her, but Vy refused to attend, saying it was against prison rules and against the law. After filing a formal complaint, Hieu was invited to meet with prison officials. They informed him that Vy had “denied making any such allegations,” without producing any written proof. We are in the process of corroborating Hieu’s story and will update our readers as more facts come to light.

Huynh Thuc Vy’s family visited her at Gia Trung Prison in Gia Lai Province on October 9. Her brother, Huynh Trong Hieu, reported that during the last five minutes of the visit, when Vy was allowed to hug her children, she whispered to her six-year-old daughter that she had been “beaten and choked by the neck.” Hieu also said that at the last visit on August 10, Vy slammed the phone on the floor after being told she could not hug her children, but she later said she was not disciplined for it. Hieu said Vy might have been targeted by officials for helping other prisoners, sharing her food with them, giving their families’ phone numbers to Hieu so he could update them about their imprisoned loved ones.

The daughter of the former prisoner of conscience Huynh Ngoc Tuan, Huynh Thuc Vy suffered discrimination during her childhood.

In 2008, she started to post some writings on the Dan Chim Viet website, which were about political and social issues, called for youth concern for politics and society, and promoted a political system with democracy and pluralism.

Then, she became a dissident blogger on human rights issues, especially on women’s rights and democracy.

She is also the author of the book "Nhận định Sự thật Tự do và Nhân quyền” (“Identifying the Truth, Freedom, and Human Rights”), which provided detailed information on human rights violations in Vietnam.

In 2012, Human Rights Watch gave Thuc Vy and four other bloggers the Hellman/Hammett Prize for their courage and consistency despite the severe political crackdown.

On November 25, 2013, Thuc Vy and eight other founders established the group Vietnamese Women for Human Rights, a non-political, non-profit and independent organization aiming to work on protecting women from the government’s human rights violations, supporting them materially and emotionally to ensure their legal rights such as freedom of speech or freedom of assembly, and providing knowledge on human rights for members.

The group Vietnamese Women for Human Rights (VWHR) was publicly denounced as a “reactionary force” by the Indoctrination Committee of the Communist Party of Vietnam (VCP) on state-run channel National Defense Television on July 4, 2020. Such actions typically signal impending crackdowns. Formed in 2013, founders of VWHR have been targeted for attacks and persecutions by police. One of its founders, Tran Thi Nga, was sentenced to nine years in prison but was released and exiled to the US earlier in the year. Several other founding members have also been persecuted, like Pham Thi Hong, the wife of Pastor Nguyen Cong Chinh, and blogger Huynh Thuc Vy.

She has a toddler and was pregnant with her second child at the time of her trial. Her husband, Le Khanh Duy, is also a well-known political activist. Her father, Huynh Ngoc Tuan, is a former political prisoner.

Huynh Thuc Vy wrote home to say she’s healthy and is treated well in prison. She asked that her supporters help out by supporting her family’s home businesses. The letter was posted to Vy’s Facebook page.

According to Huynh Thuc Vy’s family, she was transferred to Gia Trung detention center, 200km away from her home. Her father said this had made it difficult for family visits, even though she is allowed to have visitors. It is not known why she was moved.

Later update from February: Vy’s letter dated 21/2 was received by her family in early March. In it she said she was in good health and spirits, and has been treated well. Her only complaint is that prison officials keep her letters too long before sending them to her family. She also mentioned being able to call home a few times.

Huynh Thuc Vy, who was arrested in late November, still had not been allowed any phone calls. Huynh Ngoc Tuan, her father, who was a political prisoner for 10 years, reported that prison officials did not allow him to see Vy. When he told them he wanted to give her 6 million dong, they made him break it up into six different amounts with six separate invoices: one for 3 million dong, one for 1 million dong, and four each for 500,000 dong.

Huynh Thuc Vy was taken into custody after a court in Dak Lak revoked the suspension which allowed her to delay serving her prison sentence. The reason given was that she had violated her terms of suspension by “actions that violate the law which cause dangers to society.” The court did not specify what those actions were. According to domestic law, however, she should not have to report to prison until her child is three years old, which he isn’t yet.

According to Thuc Vy’s husband, two commune police came to their house at 7 am on August 8 in Buon Ho town, Dak Lak Province to give Vy a sixth summons after she ignored five others.

Then, around 30 policemen, including commune, provincial police and plainclothes officers, surrounded their house and forcibly took her away.

Approximately one hour later, another group of 30-40 police officers came back again with an emergency search warrant. They searched their house during two to three hours, and seized Thuc Vy’s laptop, camera, iPhone, books, tapes, and clothing, while her husband held and fed their daughter. After that, they surrounded their house without allowing others to come in or go out to isolate Duy and their daughter. In addition, they also demanded to search Duy’s 80 year-old mother’s house and waited for her return from a funeral to come in.

In the last update, Vy came home at 9:45 pm on August 9, 2018. According to her Facebook, she was detained and prosecuted under the Article 276 of Penal Code 1999 for “offending the national flag” on August 9, 2018 because she had sprayed paint on the national flag in 2017 as a sign of protest. Thuc Vy was also banned from leaving her residence and many of the confiscated items from her home remained in police custody.

On October 16, Huynh Thuc Vy had a working session with Buon Ho police.They gave back some of her confiscated items from her August detention, including her camera, iPad, printer, books, and a traditional outfit. Her laptop, two smart phones and three yellow-flag jackets were not returned. In addition, police said they were asking the Procuracy for prosecution against her for “offending the National Flag” under the Article 276 of the 1999 Penal Code.

On November 2, Huynh Thuc Vy went to the headquarters of the Procuracy of Buon Ho District to receive the indictment against her for “offending the national flag” under Article 276 of the 2015 Criminal Code. Her case was to be sent to the court to make a decision within 30 days in regards to holding a trial against her. At the time of writing, Vy and her husband’s Facebook accounts were blocked for three days.

The trial was later moved from November 22 to 30.

The People’s Court of Buon Ho Commune, Dak Lak Province sentenced Huynh Thuc Vy to two years and nine months in prison on November 30. Vy was charged under Article 276 of the 1999 Penal Code for “offending the national flag” for spray-painting a flag in 2017 as a sign of protest. At the time of the trial, she had a toddler and was pregnant with her second child. As such, her sentence will be put on hold until the unborn child turns three, but she will still have to serve it out in its entirety. Thus, we have listed her status as "Sentenced to prison," even though she is not yet physically imprisoned. She believes the Court imposed the sentence as a means to get her to leave the country, which she refuses to do.

Lawyer Le Cong Dinh reported that lawyer Dang Dinh Manh was harassed after Huynh Thuc Vy’s trial on November 30. After Dang Dinh Manh passed the Buon Ho toll station, traffic police stopped his car and asked for his documents. He did not give them the documents but asked the officers what law he had violated and why he had been stopped. They accused him of driving away after causing an accident. After Manh suggested they check his car’s camera, police made a phone call and said that the accident might have happened in the tunnels where the camera would not have observed it. Manh argued that his car has a camera both in the front and back. Police again called someone and finally let him go, saying that “they might have misunderstood, so please go” without checking the camera as Manh had suggested. It was not the first time lawyer Manh was harassed after a dissident's trial. In May 2018, right after Manh left the court building, right in the area tightly surveilled by the police, he was coerced into a car and his work laptop was taken away by a group of unknown individuals.

On January 4, 2019, The People’s Court of Buon Ho Town, Dak Lak Province, issued a decision on the judgment execution to Huynh Thuc Vy. They warned that if Vy did not write a request to delay the judgment execution, they would issue another order to force her to serve her sentence within seven days.

In a report about an administrative fine, issued by the People’s Committe of Thong Nhat Ward, Buon Ho Town, Dak Lak Province, the Committee said that Huynh Thuc Vy did not comply with a police invitation on three separate occasions. She was asked to work on issues related to her suspended prison sentence, despite approaching her due date with her second child. They also banned her from leaving her residence even though she needed to receive healthcare services.

Huynh Thuc Vy’s brother said the family still has not been able to give Vy her depression medication because prison officials did not allow it. Vy also wrote to let them know she would be transferred to another location soon, but she said she didn’t know exactly when or where.

The Committee to Protect Journalists released an infographic for International Women's Day showing the 32 of the reported 251 jailed journalists worldwide at the time who are female. Two of the 32 are Vietnamese women: Tran Thi Nga and Huynh Thuc Vy.

The Committee to Protect Journalists featured Tran Thi Nga and Huynh Thuc Vy in their interactive feature on the 32 women journalists in prison worldwide. Check it out, here. 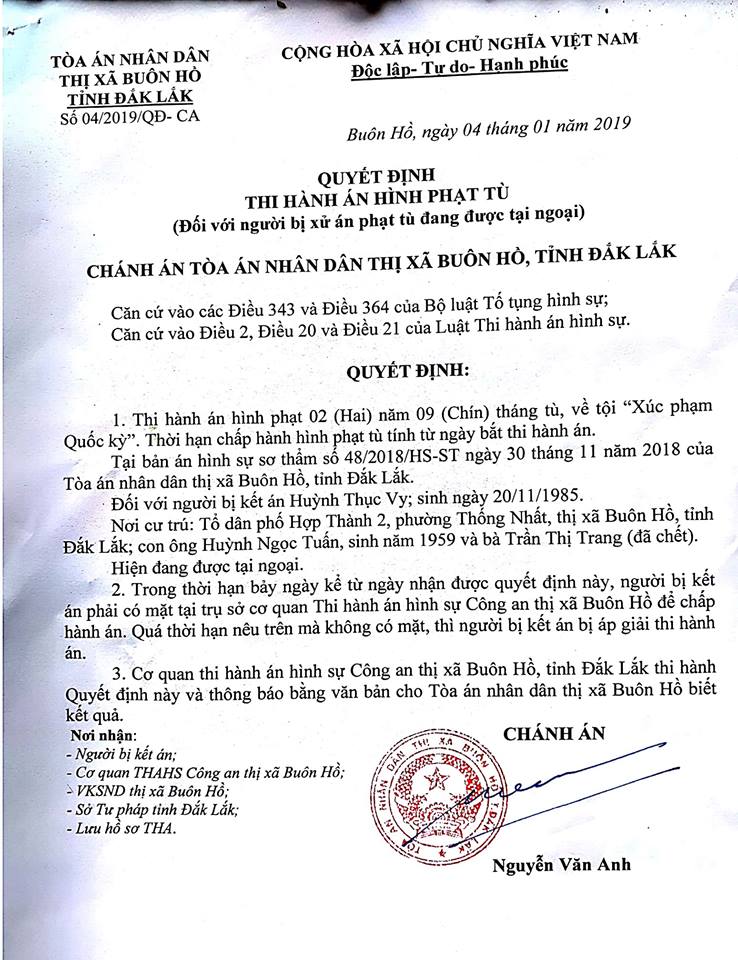 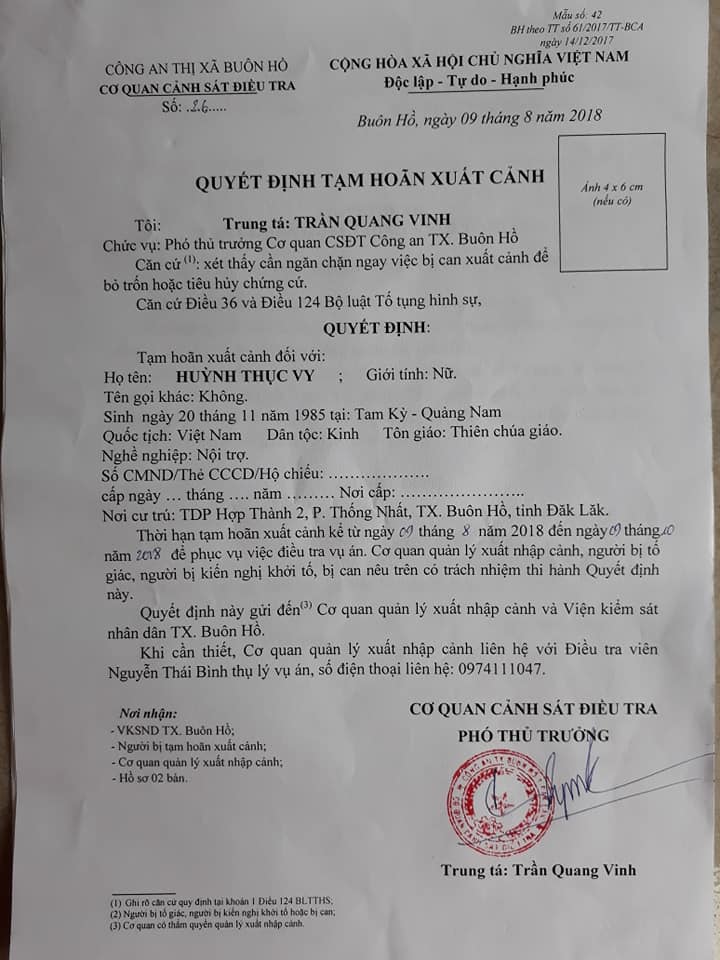 Huynh Thuc Vy's order to ban her from going abroad 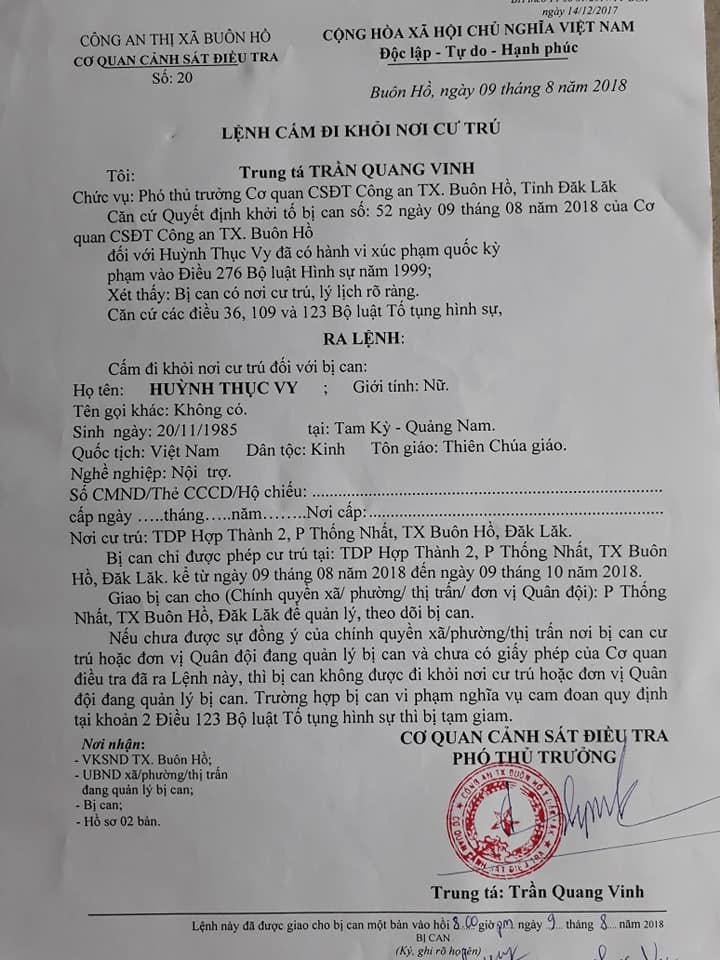 Huynh Thuc Vy's order to ban her from leaving her residence 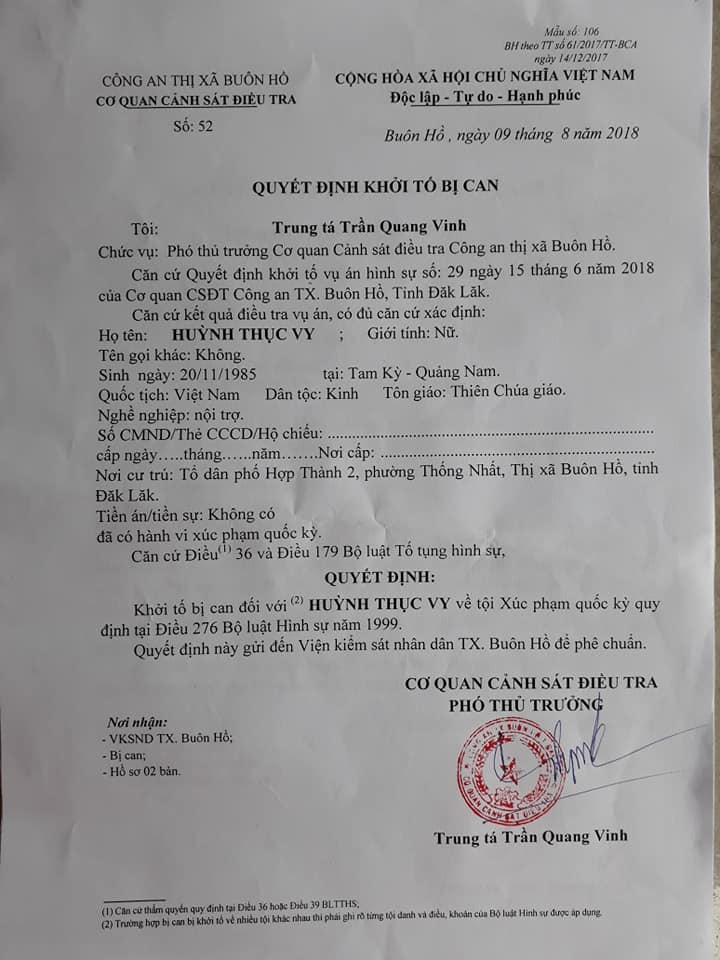 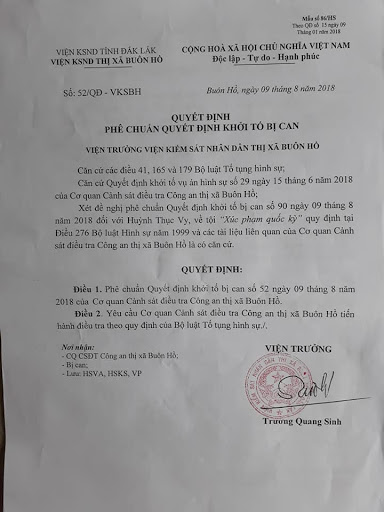 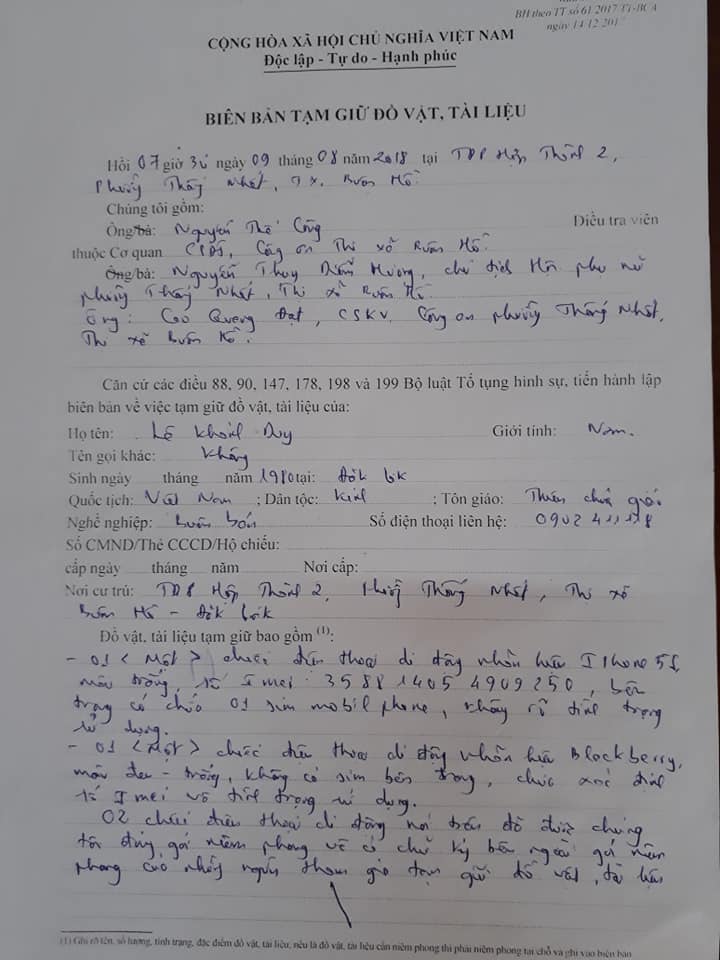 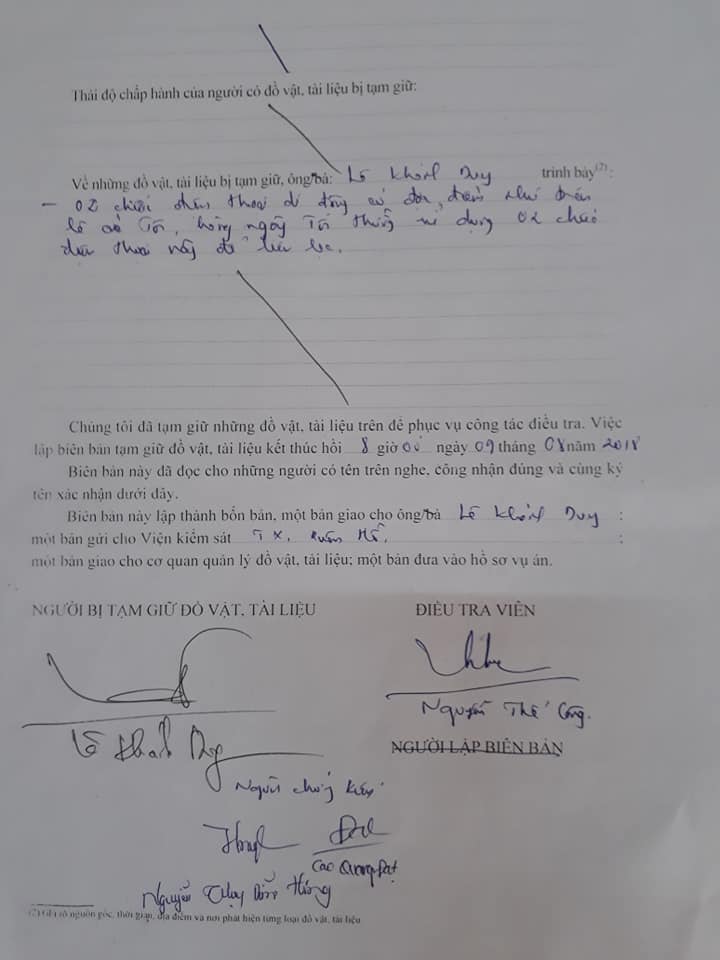