In a surprise move by Vietnam, US citizen Michael Phuong Minh Nguyen was released from prison and returned to the United States. His wife has confirmed that her husband arrived safely in Orange County, California, on October 22. Vietnam’s Foregin Ministry said that his release was for humanitarian reasons.

In a press conference, Nguyen spoke about the conditions he faced in a Vietnamese prison, including having no privacy in his personal correspondence and never being fully told the reasons for the charges against him. He also claims he was kidnapped by unidentified men, only later identified as police officers, during his arrest. Nguyen was denied a lawyer until a day before his trial. “They had written out a statement for me to sign and the public defender’s main job was to get me to sign a statement of words that were not even my own,” he said. Read more about his experience here.

Representative Harley Rouda (D-CA) said his office had been working closely with representative Katie Porter (D-CA) and the State Department to secure the release of Michael Nguyen ahead of the visit by US Secretary of State Mike Pompeo.

Michael Nguyen is a US citizen of Vietnamese descent. He was living in California with his family before his arrest. He owns a printing business.

His family has maintained that he is not involved in any activism efforts.

Nguyen is married and has four young daughters.

No Progress Seen in Case of US Citizen Held in Vietnam, Radio Free Asia, October 31, 2018

A U.S. Citizen Detained in Vietnam Could Face the Death Penalty for Subversion, Time, June 11, 2019

Michael Nguyen was still being detained in Vietnam. His family has not been able to speak with him. Several US lawmakers were organizing efforts to press for his release. Mr. Nguyen still had not been officially charged and could be held for several months without charges.

The US Embassy confirmed in early August that US citizen Michael Phuong Minh Nguyen was detained in Vietnam after travelling there for a vacation and to visit family. He was detained on July 7 in Dong Nai Province while travelling by bus from Da Nang to Saigon, and the circumstances around the detention are unclear. He is being held in Ho Chi Minh City without charges but allegedly under investigation for “activity against the peoples’ government.” Michael will now face several months of an initial investigation period, which is eligible for extension, and which will prohibit him from receiving communications and visits; though, he is supposed to be allowed one visit from US consular representatives per month. Read the family’s press release on the situation, here. He was allegedly detained with several others, though this is unconfirmed by other news sources.

Undercover police agents attacked a relative of Michael Nguyen. The attack occurred on September 6 after the relative visited Nguyen in the detention facility. Upon leaving, she was followed by motorbikes, kicked, and forced off of her bike. The woman's leg was broken. She was so rattled by the incident that she kept it secret for nearly a month.

Even four months after US citizen Michael Nguyen was detained in Vietnam; still, no formal charges are announced against him. He has not been permitted visits form lawyers nor family. Little information has been available about his case; even US Representative Mimi Walters has not been able to obtain information about his status.

Authorities reportedly ramped up their investigation against detained US citizen Michael Nguyen, who is being held on charges of subversion. Activist Le My Hanh was summoned for police questioning in relation to Nguyen's case. Hanh and Nguyen met during Nguyen's trip to Vietnam in the summer of 2018, shortly before his arrest.

Detained US citizen Michael Nguyen's wife, Helen Nguyen, attended the US's State of the Union address, invited by Rep. Katie Porter of California. She was also able to meet with House Speaker Nancy Pelosi and Rep. Eliot Engel of New York and was optimistic that her advocacy for her husband's freedom would travel with US President Trump when he visited Vietnam in late February. Michael Nguyen was still being held without formal charges, but he under investigation for subversion under Article 109 of Vietnam's 2015 Criminal Code. Ms. Nguyen reported that contact with her husband has been severely restricted, with a US consular official only allowed to visit him for short periods once every month. Neither the family, nor lawyers, have been permitted access. Per the most recent consular visit on January 30, Mr. Nguyen was doing well overall in prison, with only minor health issues. His family maintains he has not participated in any activism activities, and Mrs. Nguyen said that he had visited Vietnam without issues for many years prior to his arrest.

The People's Court of Ho Chi Minh City tried Michael Nguyen, Huynh Duc Thanh Binh, Tran Long Phi, and Huynh Duc Thinh (Binh's father) on Monday June 24, 2019. Michael Nguyen was sentenced to 12 years, Huynh Duc Thanh Binh to 10 years, Tran Long Phi to eight years, and Huynh Duc Thinh to one year. Nguyen will be deported after completing his sentence. All except Thinh were convicted of subversion for allegedly planning to incite protests and attack government offices. The four were arrested in July, 2018. Another person, Truong Quoc Bao (Thomas Quoc Bao), was also arrested at the same time, but he managed to escape when the police took him back to his home for a search. There is no news on his whereabouts. It was a short and speedy trial in Ho Chi Minh city. Scheduled to be a two day trial, it was finished in less than four  hours.

The 88 Project is aware of and investigating the claims of violence involved in these cases. However, in the absence of a free press environment, the defendants should be given the benefit of the doubt, and any accusation by the authorities against them should not be taken for granted.

Lawyer Nguyen Van Mieng said that Michael Phuong Minh Nguyen, a US citizen who was sentenced to 12 years in prison in June, submitted his petition for appeal, asking for a reduction in his sentence.

U.S. citizen Michael Nguyen‘s 12-year prison sentence was upheld after a short appeal trial on November 6. While the family has been involved in extensive advocacy efforts with the US government, “support of U.S. lawmakers appears to have done little to convince the Vietnamese government to ease Nguyen’s sentence.” Former political prisoner Huynh Duc Thinh‘s sentence was also upheld.

In a surprise move by Vietnam, US citizen Michael Phuong Minh Nguyen was released from prison and returned to the United States. His wife has confirmed that her husband arrived safely in Orange County, California, on October 22 (thus we estimate his release date of October 21). It is not yet known why he was released early. This is a developing story.

Several members of the US Congress have advocated for Michael’s release, including Congresswoman Mimi Walters (R-CA).

Supporters have called for Nguyen’s release in a petition on Change.org.  “For any government to incarcerate anyone without any probable cause is a blatant violation of human rights and of international law, especially if the detained is a citizen of another country,” says the petition, which hopes to raise enough signatures to be sent to US Secretary of State Mike Pompeo.

Three US Members of Congress urged President Trump to raise human rights with Vietnamese leaders when he met North Korean leader Kim Jong Un for a summit in Hanoi. Reps. Zoe Lofgren, Chris Smith, and Alan Lowenthal signed the letter, dated February 19, and in it lamented that Vietnam was chosen to host the summit despite its dismal human rights record. They encouraged Trump to highlight the case of Michael Nguyen, a US citizen detained in Vietnam since July 2018.

While in Vietnam, Trump, however did not openly mention the case of Nguyen.

On June 24, 2019, the office of Congressman Lowenthal issued a statement regarding the sentencing of Michael Phuong Minh Nguyen, an American citizen, requesting the Vietnamese government to release him immediately.

Helen Nguyen testified about her husband's case in front of the US House of Representatives. 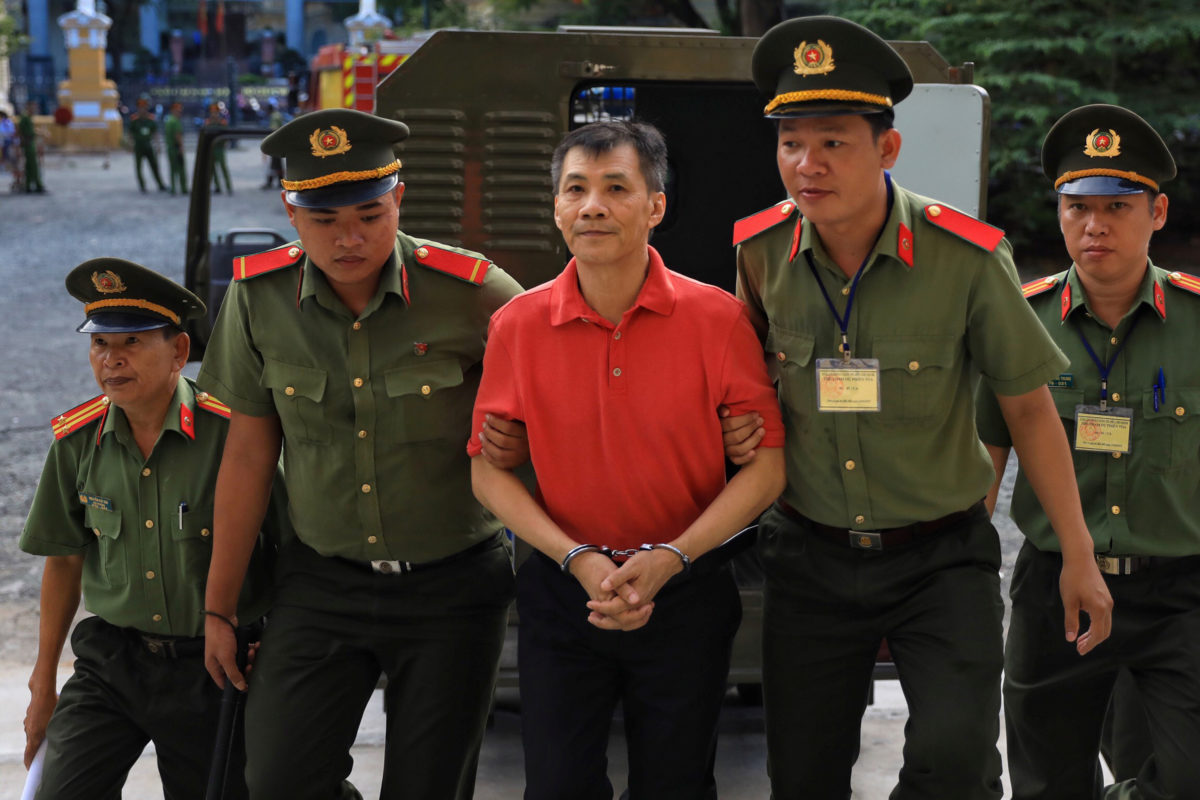 Wife of American imprisoned in Vietnam testifies in D.C., The OC Register, July 25, 2019

Orange County man still faces up to 12 years in Vietnamese prison after appeal is denied, The OC Register, November 6, 2019