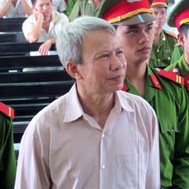 Longtime post-war prisoner and political prisoner Ngo Hao, 73, and his wife Thi Kim Lan, were allowed to emigrate to Finland on April 4. In January of 2020, he was given a temporary suspension of his sentence due to poor health, and after a campaign by international advocates and the government of Finland, he was finally released and expelled from the country.

Authorities temporarily suspended the prison sentence of political prisoner Ngo Hao so that he can receive medical treatment. The sentence was suspended for one year. Hao is suffering from uncontrolled high blood pressure and eye ailments. Hoa is seven years into his 15-year prison sentence. This was not the first time his family had petitioned for medical assistance. In January 2019, Hao had a stroke in prison, and the authorities failed to notify his family. His wife's request to take him for treatment was denied. Hao also had a stroke three years prior to that. Also in January 2019, he was unable to see out of one of his eyes, while the other's vision was reduced by 40%. In late 2019, two political prisoners died while in prison due to apparent health issues-- Dao Quang Thuc from an alleged brain hemorrhage and lung infection and Doan Dinh Nam from kidney failure. Lack of access to medical treatment is often a significant factor in political prisoners' lives and can prolong suffering, resulting in cruel and inhumane treatment, and even death.

Ngo Hao is a pro-democracy activist. He was known to support other activists in Vietnam through his writings, such as members of the Buddhist Hoa Hao minority and the Bia Son environmental group. Some had asked him to appeal for help from international organizations on their behalf.

In 1977, Hao, a former soldier of South Vietnam, was imprisoned for 20 years for founding the political party Federation of Vietnam. After his release in 1997, he continued to campaign for democracy and multi-party pluralism. Hao was re-arrested in 2013 and sentenced to 15 years for “conspiracy to overthrow the government.”

Hao was arrested on February 8, 2013, for online content accused of being critical of the government and for supporting Bloc 8406, a pro-democracy group. He had also been accused of receiving money from foreign groups that was intended to be distributed to activsits inside Vietnam. He was tried in Phu Yen province on September 11, 2013, and was sentenced under Article 79 of the 1999 Criminal Code, for subversion, to fifteen years in prison and five years of house arrest.

Ngo Hao, 75 at the time, had a stroke in prison, and the authorities failed to notify his family. His wife's request to take him for treatment was denied. The news actually came from fellow political prisoner Hoang Duc Binh. Hoa also had a stroke three years ago, and his health was worsening. At the time of this writing, he was unable to see out of one of his eyes, while the other's vision was reduced by 40%.