Dien is a researcher in Sino - Vietnamese language and currently works and lives in Hanoi, Vietnam.

Dien started to work for the Institute of Sino-Vietnamese Language in early 2010. He also started to participate in demonstrations and peaceful protests against Chinese maritime moves in the South China Sea at the same time. He also managed a quite famous blog and wrote about political conditions in Vietnam, corruption, and abuse of power. He was almost charged by the public security force of Hanoi in 2012 for calling for an independent investigation into the Tien Lang land dispute. He continues to contribute to the democratization movement in Vietnam.

January 13, 2020: put under surveillance in the aftermath of the Dong Tam raid

On January 9, 2020, a massive police force stormed into Dong Tam commune and violently assaulted and detained citizens, as well as killed community leader Le Dinh Kinh. The area is home to a longstanding land conflict. In the aftermath of the raid, Dien was prohibited from leaving his home to attend Le Dinh Kinh’s funeral. 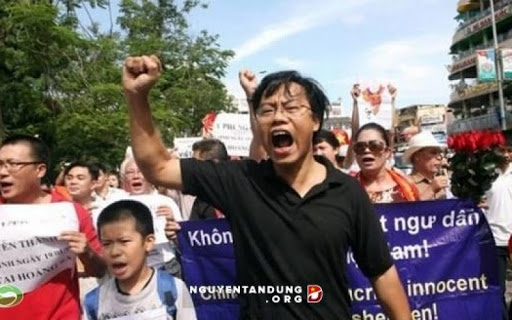 Dien at a sovereignty protest