Hai was said to join both the May 11 and 20, 2019 protests at Bac Thang Long-Noi Bai toll booth. On his Facebook account Davis Pham, Hai often shares and expresses his views on national issues, such as corruption and environmental pollution.

May 20, 2019: detained and assaulted for participating in a peaceful demonstration

On the morning of May 20, many drivers and activists in Ha Noi arrived at Bac Thang Long-Noi Bai toll booth to express their opposition toward the existence of the toll booth, since it had been denounced as unlawful by the local authorities 10 years ago.

Yet without any public discussion or reasonable warning, the public security arrived and treated the activists like criminals. According to Nguyen Thi Thu Thuy (or Facebooker Nguyễn Trần Công), also cited by Radio Free Asia Newspaper, the security forces beat the protesters harshly and then arrested Dang Thi Hue (Facebooker Huệ Như), Pham Thi Tiep, Manh Hung, Pham Nam Hai, Thang, and an unknown driver. Thuy herself was also in the same situation but released early due to the lack of evidence. The security forces even arrested Thuy’s husband and sister, Nguyen Tho, after they went to question the authoriites about Thuy’s arrest in the afternoon.

In the case of Hai, he was arrested at 10:00 AM after questioning the station about the BOT’s transparency for three hours. Security forces detained him at Soc Son District’s police station and forced him to sign an administrative fine report of 2.5 million VND (approximately 108 USD), otherwise his car would be confiscated. 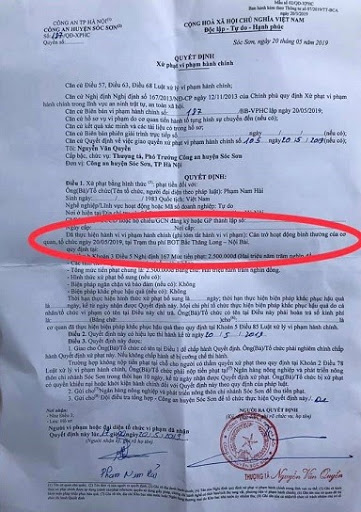 The decision on Hai's administrative fine