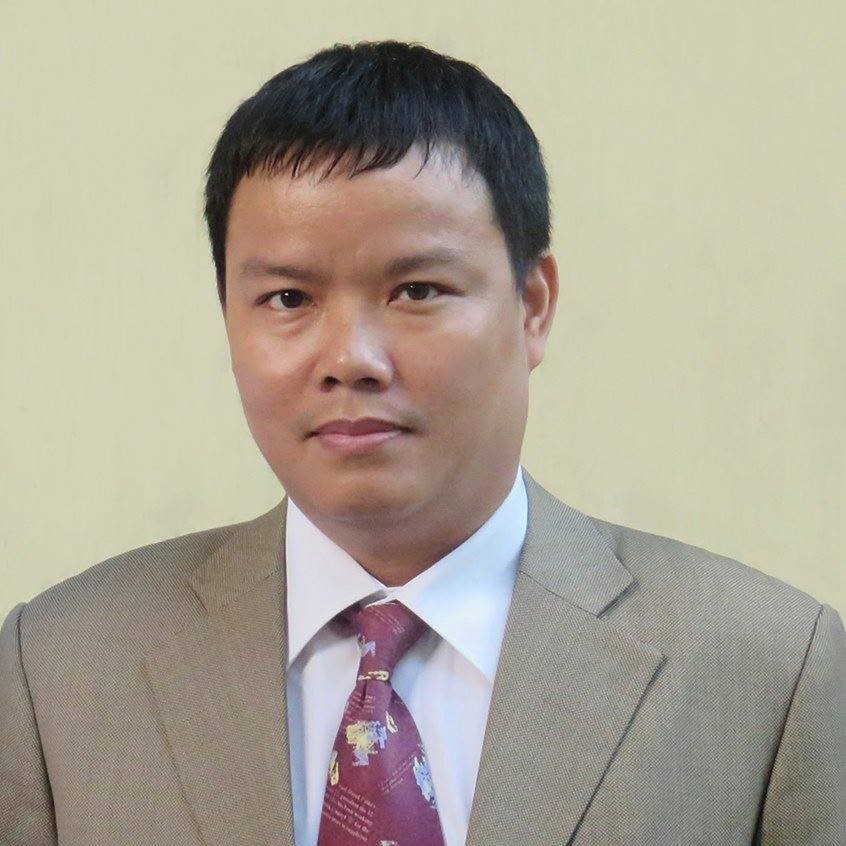 Le Anh Hung has launched an appeal of his five-year sentence for “abusing democratic freedoms.” Prison officials have told Hung’s mother that she can not visit her son while the appeal is in process. The law, however, specifies that “Those held in temporary custody can meet their relatives once a month.”

Journalist Le Anh Hung was tried in secret on August 30 and sentenced to five years in prison without the knowledge of either his lawyers or his family. It wasn’t until his mother, Tran Thi Niem, called the investigators in early September that she learned of the trial. For reasons that aren’t clear, he has spent the last three years, from April 2019 to May 2022, in a psychiatric hospital, which, according to the investigators his mother talked to, will count toward his prison time. During his unusually long pre-trial detention period, Hung often alleged physical and psychological abuse and has had to go on several hunger strikes in protest.

Le Anh Hung was moved from the National Psychiatric Ward in Hanoi, where he was admitted in April 2019, and returned to prison so that the criminal prosecution against him could resume. A member of the Independent Journalist Association of Vietnam, Hung was arrested in July 2018 and charged with “abusing democratic freedoms.” However, he has yet to be tried. During his unusually long pre-trial detention period, now entering its fourth year, Hung has often complained of physical and psychological abuse and has had to go on several hunger strikes to protest the abuse.

Attorney Nguyen Van Mieng posted on his Facebook page a brief report on three political prisoners whom he talked to by phone on May 17:

Le Anh Hung looks thinner but is mentally sharp. He did not ask the court for a reduction in his sentence; however, he did ask it to apply the time he spent in the mental ward toward his pretrial detention since he never had a day of freedom since he was arrested. He also demanded that the court release him at trial.

Mieng said he could only speak to each person for about 15 minutes even though the law says he can have “unlimited time” with his clients.

Hung has written for several international media outlets, including Voice of America, and is a member of the Independent Journalists' Association.

Hung was detained in a mental health facility in 2013 after police came and took him away from his workplace. He has long been a critic of the Vietnamese government and subject to various forms of harassment.

Truong Van Dung and Le Anh Hung were called in for police questioning for their ties to the Brotherhood for Democracy (founded by dissident lawyer Nguyen Van Dai) just days before the APEC Summit began in Da Nang, Vietnam, in November 2017. They did not heed the summons, saying that they had not committed any crimes and should have the right to freedom of association to participate in the group.

Hung, a blogger and journalist, was arrested on July 5 in Hanoi and charged with “abusing democratic freedoms” under Article 331 of the 2015 Criminal Code for posting a letter critical of the government and its proposed law on special economic zones. He faces up to seven years in prison.

On October 11, lawyer Nguyen Van Mieng was able to meet Le Anh Hung in prison. Lawyer Mieng said that Hung was in good health and spirit. On September 12, Hung’s mother, Mrs. Niem was also able to see him. She also said that he looked thinner but his spirit had remained strong. Hung said he had not cooperated or worked with security officials and gave thanks to those who were concerned about him and those who had helped him. His detention order was extended for two more months while police continued their investigation.

On December 6, Mrs. Niem, Le Anh Hung’s mother, went to Detention Center No.2, Thuong Tin District, Ha Noi and reported that Hung's case was sent to the Procuracy. After only one meeting three months ago, she was not allowed to meet with Hung again, even after trying to meet the many requirements imposed by the detention center. The reason for this refusal was that Hung’s case was sent to the Procuracy and she allegedly needed to contact that agency in order to be able to meet with him. However, according to the law, which came into effect on January 1, 2018, Hung is legally allowed to meet with family once a month.

On the morning of January 29, Le Anh Hung’s mother and friend went to Detention Center No 2, Thuong Tin District, Ha Noi to visit him. However, for unknown reasons, the police forced Hung to wear a prisoner outfit and handcuffs for the visit. Hung protested this requirement. As a result, the prison authorities then banned him from meeting with his mom and friend. Hung was said to be in a good health, according to his lawyer, who had visited a few days prior.

Mrs Niem, Le Anh Hung’s mother, revealed that Hung was not allowed to meet with his relatives in prison. Prison authorities imposed the punishment after Hung refused to wear a prisoner uniform and handcuffs. Le Anh Hung was arrested on July 5, 2018 for posting a letter critical of the government and its proposed law on Special Economic Zones. He faces up to seven years in prison. He is still under pre-trial investigation under Article 331 of the 2015 Criminal Code ("abusing democratic freedoms"). Due to this, Hung has refused to be treated as a prisoner without being sentenced.

Le Anh Hung’s mother, Tran Thi Niem revealed that the investigation agency suddenly transferred Hung to the Central Mental Hospital (the article in Vietnamese, here) in Thuong Tin District, Ha Noi, on April 1, 2019. On the morning of April 4, Niem, Hung's bother, and a friend of Hung went to visit him but were denied access. The investigation agency said that they were checking on Hung's health and waiting for the result. His mother was only able to send him some money. Hung had protested against wearing handcuffs and a prisoner uniform, as he has not yet been convicted of any crime. He is still under pre-trial investigation under Article 331 of the 2015 Criminal Code (“abusing democratic freedoms”).

Le Anh Hung was again sent to a mental health hospital, Central Mental Hospital No. 1 in Hanoi. In April, he was sent for evaluation but was later returned to prison.

When he was on hunger strike recently, the authorities fed him via a naso-gastric tube and forced food into his mouth so violently that his nose and mouth bled. Besides intervening in his hunger strike, the authorities also forcibly injected him to “heal mental illness." After being treated so brutally, Hung looked very thin, unhealthy, and completely exhausted. He called on people to protest for him and to request the authorities to stop his forced mental health treatment.

Le Anh Hung‘s mother visited him on December 5 and shared that the doctor kept increasing Hung’s anti-psychotic medication, which has made him very sick. He also has started developing symptoms such as hallucinations and insomnia.

According to his mother, political prisoner Le Anh Hung contacted her by phone to let her know that the prison authorities again increased Hung’s anti-psychotic medication. Hung’s mother herself has been hospitalized due to high blood pressure. This is not the first time that the authorities have increased Hung’s medication against his will. As we reported, they did this back in December 2019. Hung said it made him feel very sick; however, he was forced to take it. Hung asked his mother to call on the international community to raise awareness for his case.

In April 2019, Hung was transferred from jail to Hanoi’s Mental Hospital No. 1, where he has been forced to take medication against his will. Insisting he is not suffering from mental health issues, Hung has resisted the medication. According to a fellow blogger named Nguyen Vu Binh, “Early this week, a nurse named An used a metal folding chair to beat him and then fastened him to his bed, injecting him with sedatives that left him unconscious.”

On March 13, 2022, our staff in Vietnam visited Mrs. Niem, mother of Le Anh Hung, and learned that he was still held at the National Psychiatric Hospital No. 1 in Hanoi. Hung was reported to be healthy and no longer forced to take medication. He had also been allowed to call home regularly to talk to his family.

Le Anh Hung was denied New Year visits from his supporters at the hospital where he was being held. Hung was being held under strict supervision. His mother said he told her he was “severely beaten and tortured by hospital’s officials, but now he does not argue with him anymore.”

We have an update on the status of Le Anh Hung. Hung's mother sent an application to authorities asking to release Hung to be able to care for him at the family's home, as he was in poor health and spirits after being subjected to forced mental health treatment while detained. Prior to his detention, she confirmed that Hung was healthy physically and mentally. She called on the international community to advocate for Hung's release.

On August, 8, 2019, Nguyen Vu Binh and Vu Hung took Mrs. Niem, mother of Le Anh Hung, to visit Hung. Only Mrs. Niem was allowed to meet with him. She told Binh that Hung’s health was stable and his spirits were better than in previous visits. Hung asked his mother to secure help from others so he can return home soon.

Political prisoner Le Anh Hung’s mother visited him and reported that the doctor kept increasing Hung’s anti-psychotic medication. Hung said it made him feel very sick, however, he is forced to take it. Hung asked his mother to call on the international community to raise awareness for his case.

Le Thi Niem, the mother of imprisoned journalist Le Anh Hung said her son told her in a phone call that the hospital had increased the medication dosage that they were giving him to 12 pills, and if he refused to take them, then they would inject him with it.

Twenty-five members of the US Congress sent a letter to the US Secretary of State urging the US to press for better protections for freedom of expression in Vietnam, citing Vietnam's obligations under the International Covenant on Civil and Political Rights. The letter highlighted the cases of imprisoned journalists Nguyen Van Hoa and Le Anh Hung and blogger Truong Duy Nhat, who was kidnapped from Thailand while attempting to seek asylum and imprisoned back in Vietnam. 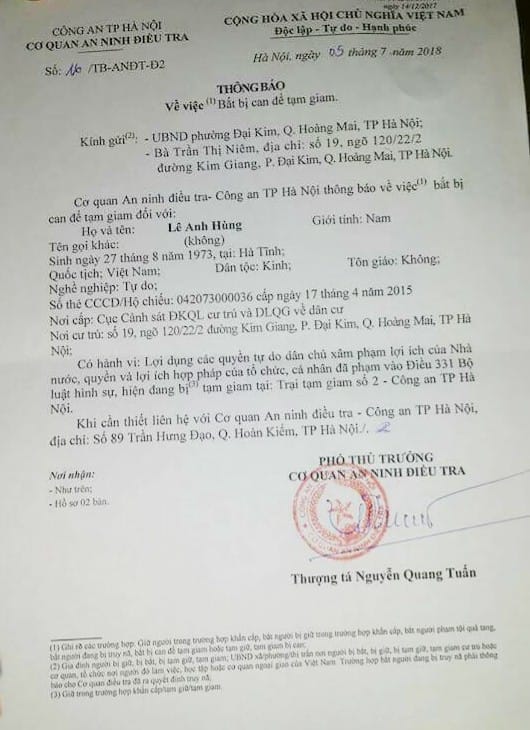 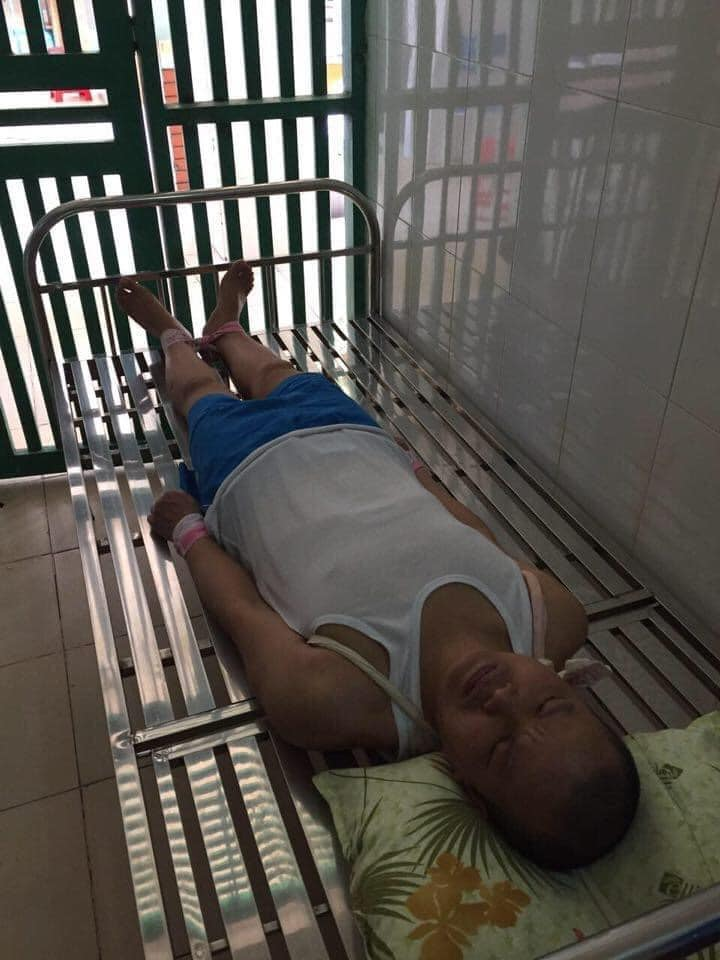 Vietnamese blogger sent back to jail after three years in mental hospital, Radio Free Asia, May 17, 2022