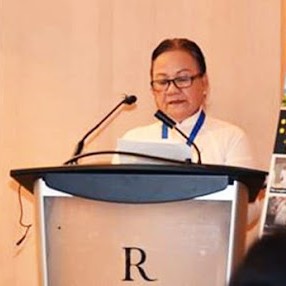 Nguyen Xuan Mai is a veteran advocate of the 1926 Cao Dai religion (Cao Dai Chon Truyen 1926). She has continuously strived for the right for followers to practice 1926 Cao Dai in particular and religious freedom in Vietnam in general. She has been representing the 1926 Cao Dai believers by speaking out at many international conferences to call for freedom of religion and belief.

1926 Cao Dai is an independent religion, not under the direction of the State, and not part of the Cao Dai Tay Ninh Sect established and governed by the Vietnamese government. Government interference has undermined the independence of the Tay Ninh Sect, and it no longer upholds the 1926 Cao Dai principles and traditions.

Followers of 1926 Cao Dai say they have been harassed for many years by the government and the Cao Dai Tay Ninh Sect. They also have frequently been forced to give up their group affiliation and are not allowed to practice their 1926 Cao Dai religion in many places in southern Vietnam.

On the evening of July 22, 2022, 1926 Cao Dai member Nguyen Xuan Mai was detained and interrogated for more than six hours after returning from the 2022 International Religious Freedom Summit in the United States, which took place from June 28 to 30. Airport security at Tan Son Nhat International Airport ordered her to talk with nine other officials.

In 2019, security authorities prevented Nguyen Xuan Mai from boarding a flight to Thailand to attend the Fifth Annual Southeast Asia Freedom of Religion or Belief (SEAFORB) Conference, forcing her to cancel her trip.

In 2018, Nguyen Xuan Mai tried to attend the Fourth Annual SEAFORB Conference in Bangkok. However, security officers prevented her from traveling by security authorities at the Chau Doc border for "national security” reasons.

In 2017, she attended the Third Annual SEAFORB Conference in Manila, the Philippines, where she reported human rights violations against followers of 1926 Cao Dai to an official of the Office of the UN High Commissioner for Human Rights. During and after attending this conference, Nguyen Xuan Mai received multiple “invitation letters” from her local police authorities in Vinh Long City for “working sessions” with the police regarding her participation in this conference.

In 2015, Mai attended the First SEAFORB Conference where she directly reported to the UN Special Rapporteur on Freedom of Religion or Belief violations of religious freedom by the central government and the Cao Dai Tay Ninh Sect.

July 22, 2022: detained and interrogated for about six hours at the Tan Son Nhat International Airport after returning to Vietnam from a religious conference in the United States

On Friday evening, July 22, 2022, Cao Dai 1926 member Nguyen Xuan Mai faced more than six hours of interrogation upon returning to the country from the 2022 International Religious Freedom Summit in the United States. She was the only one from Vietnam to attend this conference, which took place in Washington, D.C. from June 28 to 30.

Upon her return to Ho Chi Minh City’s international airport on Friday evening, she was questioned by airport security and nine officials, including one policeman from Vinh Long Province and two policemen from Hanoi, during the period of time from 8 p.m. to 2:30 a.m. During her detention, the officers took control of her email account. They also took her mobile phone and checked her messages, printing 90 documents, and forcing her to sign a letter confirming the details of the email senders. They asked her to sign a document to confirm the identities of the senders of some of the emails.

Two riot police cars were parked outside the international terminal’s exit, and nearly a dozen people in plain clothes filmed and took pictures of a group of 1926 Cao Dai followers and Mai’s relatives who had come to welcome her home. A police officer in Tien Giang Province talked to a member of the delegation and asked them to "advise" everyone to go home because Mai was being held for interrogation, and he was not sure when she would be released.

Upon hearing the news of Mai’s interrogation, former U.S. Ambassador-at-Large for International Religious Freedom Sam Brownback wrote on Twitter: “It is very worrying about the news that Ms. Mai disappeared after returning to Vietnam. She was released by the police after six hours of questioning. Thankfully she is on her way home but this is a completely unwarranted form of harassment by the government.”

Previously, on July 20 2022, the present US Ambassador-at-Large for International Religious Freedom, Rashad Hussain, wrote on Twitter: “Ms. Nguyen Xuan Mai is a courageous advocate for the rights of independent Cao Dai and freedom of religion or belief in Vietnam, including at the #IRFSummit2022. We wish her a safe return journey home to Vietnam where she will reunite with her family”.