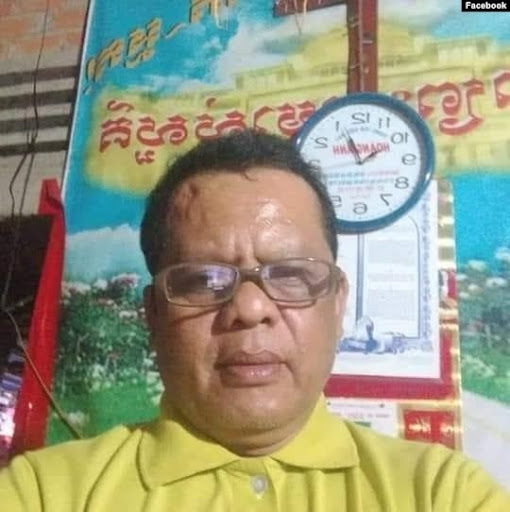 Thach Rine is a member of the Khmer Krom ethnic community in Tra Vinh in southern Vietnam.

Thach Rine is an activist in the fight for the rights of the Khmer Krom indigenous people.

He has also advocated for the UN’s Sustainable Development Goals; their group printed shirts with the SDG logo and he himself has used the logo for his Facebook avatar. The group has also printed and worn shirts of the Khmer Kampuchea-Krom map, with the flag.

Thach Rine has also raised the issue of land disputes between Cambodia and Vietnam.

He is accused of posting pictures of Ho Chi Minh on his Facebook page that allegedly “smear the leader.”

On May 25, 2021, provincial police confiscated 150 copies of UN documents from Thach Rine, copies of the International Covenant on Civil and Political Rights (ICCPR), Universal Declaration of Human Rights (UDHR), and Declaration on the Rights of Indigenous Peoples (DRIP). Thach Rine was also detained and questioned for ten hours over his wearing of a t-shirt with a UN logo.

In June, the The Khmers Kampuchea-Krom Federation (KKF) raised their concern about the case, and in July, 2021 the UNPO (Unrepresented Nations & Peoples Organization) raised concerns about police harassment of Thach Rine.

Vietnamese Police Confiscated the United Nations Documents and Detained a Khmer-Krom for Wearing a T-shirt with a SDGs Logo, June KKF, June 26, 2021

VOA reported that as a Khmer Krom Protestant, Thach Rine had been a target of police surveillance and harassment for some time, and that “they have been waiting for the right excuse to arrest him.”

The pressure was stepped up after he recorded himself reading the UN Covenant on the Rights of Indigenous People and posted that on Facebook.

The police also stopped him in the streets when he was taking his grandchild to school. They later went to his house to confiscate t-shirts printed with the UN’s Sustainable Development Goals logo and other Khmer Krom shirts and150 copies of the UN International Covenant on Civil and Political Rights, the Universal Declaration of Human Rights, and the Declaration on the Rights of Indigenous People (DRIP).

Most state media, however, emphasized that Rine was arrested for falsifying the history of the territory of southwestern Vietnam. The debates between the origin and history of the territory of southwestern Vietnam have always been a contentious issue between the Vietnam authorities and Khmer Krom nationalists. This leads to the question of whether Khmer Krom should be granted the status of indigenous population and enjoy relevant incentives.