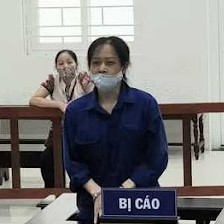 Thuy is a lawyer and lives and works in Hanoi City.

Thuy has no previous activism record.

According to the allegations, Thuy represented Tran Quang Ngu in a fraudulent case concerning state property. During this case, Thuy made two complaints and sent them to the relevant authorities. Reportedly, Thuy believed that Ngu was innocent, and in the complaints she accused several leaders of corruption.

What should be noted is that Thuy did not share these complaints online, nor leak them via any public communication channels. She strictly followed the procedural requirements of making official complaints in Vietnam. However, the content of the two complaints were still deemed to be libel and defamatory against several of the Party’s leaders.

The punishment of people who even follow legal rules and procedures is exemplary in this case.

According to a government report, Thuy has a mental health disorder, for which the government gave her a reduced sentence. We are unable to independently verify this information.

Note: The arrest date is unknown, so we have used the trial date in its place until more information is found.