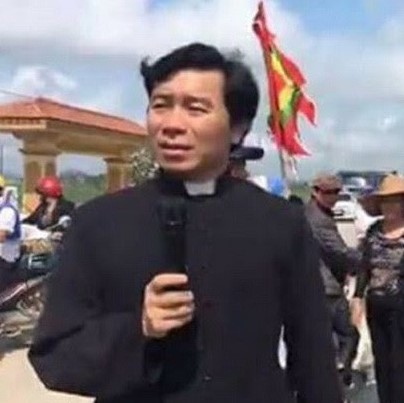 Pastor Nguyen Dinh Thuc, based in Nghe An Province, is well-known for his activism and support  gofrassroots right movements.

Nguyen Dinh Thuc became a pastor on June 19, 2010, and from that point on, he has had a very rich history of activism.

He was originally assigned to work at the Quan Lang Parish (Tuong Son Commune, Nghe An). However, after a stand-off between the authorities and the local followers in 2012, the Church of Nghe An was pressured to assign him elsewhere. He is currently working at Song Ngoc Parish.

In 2013, 14 Christians were accused of national security crimes. Thuc and many other followers requested to attend the so-called open trial but were refused. Yet, the authorities blamed him for disrupting public order.

In 2016, after the Formosa incident, Pastor Thuc became part of the forefront of the movement protecting the legitimate rights and interests of affected fishermen and residents.

He is now frequently attacked by state media and has been banned from travelling abroad several times (most recently in 2017 and 2019).

November 21, 2019: banned from travelling abroad to attend a special mass

Vietnamese authorities blocked the Catholic priest from travelling to Japan to attend a mass by the Pope, he said on Thursday (Nov 21, 2019), accusing the government of targeting him because of his environmental activism. The vague justification for the ban was to “protect national security and public order.”

According to Thuc, he can still keep his passport, and the customs officers said that they do not know particular details on the ban, including the period of the ban or why there was no prior notification to Thuc. They mentioned that ir depends on the provincial authority and its communication with the Immigration Department.