Thinh Nguyen is a prominent independent artist and filmmaker.

Thinh Nguyen is known for his creation of the video interview series “Thinh’s Stories” (Chuyện của Thịnh), which give wrongfully convicted prisoners, death row inmates, political prisoners, and their families a chance to tell their stories and their concerns with the hope that it could grab the public's attention.

October 25, 2019: detained and belongings confiscated because of artistic work

According to journalist Pham Doan Trang and our local sources, when Thinh stopped by a grocery store nearby his home around 11:30 am, he was violently captured by public security officers and then escorted back to his home and forced to open the door.

A video captured by a security camera showed Thinh handcuffed and coerced into his own house by a group of ten men, of whom only one was wearing a police uniform. After 15 minutes searching his house, at noon, the public security took Thinh away without any arrest warrant.

Thinh was released later in the evening, but his two computers, cameras, phones, and other electronics and books were confiscated. He told AFP that, during the detention, the security officers asked a lot of questions about his work. He refused to answer without the presence of a lawyer.

He was released later in the evening of the same day of his detention, but he is still facing a high risk of re-arrest. 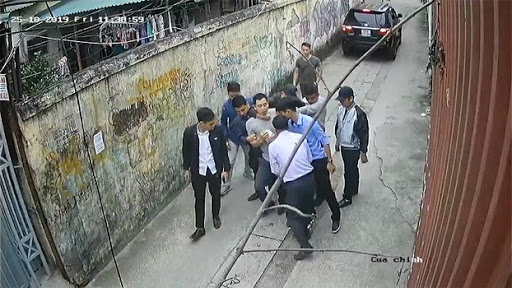 Thinh dragged back to his apartment