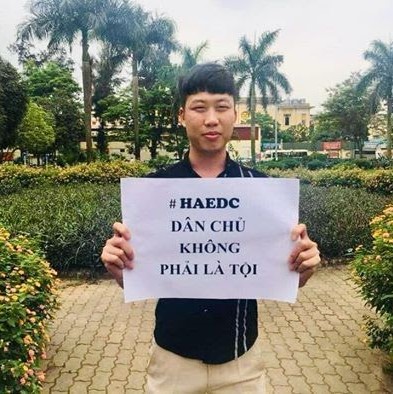 Before being arrested, Ninh lived and worked in Uong Bi, Quang Ninh Province. After being constantly harassed by the local public security, Ninh had to move a lot, from Thai Nguyen Province to Ho Chi Minh City, to make a living.

Ninh has participated in many grassroots activities and rights movements. Many activists know him for his charity work.

Ninh has shown his support for many other civil society organizations, including Brotherhood for Democracy (see profile picture). He is reportedly an official member of Hoang Sa group (an independent group with the objective of studying and carrying out activism concerning the maritime territorial dispute between Vietnam and China).

According to some reports, Ninh’s mother is over the working age and struggling living alone. However, the community is unable to help since they do not know where she lives.

Ha Hai Ninh’s arrest date remains unknown. The activist community only found out about his situation after his trial. Since his trial was held on July 23, 2019, and he had reportedly been detained for over a year, it could be argued that Ninh was arrested around June or July of 2018.

No state media has reported about the trial. News of the trial came out when the court sent summons to some of Ninh's friends asking them to come to court to testify.

It is very hard to find any available information on the case of Ha Hai Ninh. With Article 109 being chosen to apply in Ninh’s case, it is possible that he was sentenced for alleged involvement with a political organization.