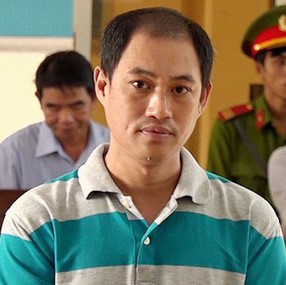 Phuoc used his Facebook to express his views on national issues and likely to criticize the dominant power of the Communist Party.

On October 29, 2019, the People’s Court of An Giang Province held the first instance trial and sentenced Phuoc to five years in jail for “making, storing, spreading information, materials, items for the purpose of opposing the State of Socialist Republic of Vietnam,” under Article 117 of the 2015 Criminal Code.

According to the indictment, Phuoc allegedly used four different Facebook accounts to communicate with “reactionaries,” livestream to talk about political issues, and post and share articles with alleged anti-state content. In April 2017, he created three flags of the former Republic of Vietnam regime, the regime in South Vietnam prior to 1975. One of them was placed in his home while the other two were shown on poles in his local area.

Local residents discovered the flags and informed the authorities on April 30, 2017. The public security of Long Xuyen City went to the area and confiscated the flags for investigation. According to state media, on December 10, 2018, Phuoc went to admit his guilt at the Investigation Agency of An Giang Province. Phuoc was formally prosecuted and arrested on April 19, 2019.