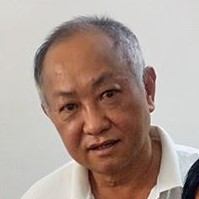 Nguyen Ngoc Cuong, a former political prisoner, is from Gia Lai Province. His only son, Nguyen Ngoc Tuong Thi, was born when Cuong was serving his sentence in prison. Advocating for democracy, Cuong, his son, and his daughter-in-law were all convicted under the charge of Article 88 of the 1999 Penal Code for “conducting propaganda against the socialist state” in the same trial in 2011.

Nguyen Ngoc Cuong was in the army of the Republic of Vietnam, the old regime in the south of Vietnam prior to 1975. Up to now, Cuong has been arrested four times due to advocating for democracy.

His first arrest was on December 24, 1975, after the fall of Saigon. The new communist government accused him of “rekindling to undermine the revolutionary administration” and sentenced him to three years in prison. Continuing to advocate for democracy, Cuong was arrested for the second time in April 1979 and imprisoned for four years at Gia Trung prison. After his release, Cuong was soon again arrested in August 1985 and handed a three-year conviction. During his third time in prison, Cuong received the good news that his wife gave birth to a son, Nguyen Ngoc Tuong Thi. Thi also became a pro-democracy advocate.

On March 28, 2011, Cuong, his son, Nguyen Ngoc Tuong Thi, and his daughter-in-law, Pham Thi Bich Thuy, were arrested and convicted of “conducting propaganda against the socialist state,” under Article 88 of the 1999 Penal Code. In the first instance trial, held on October 21, 2011, the People’s Court of Dong Nai Province sentenced Cuong to seven years, which was upheld in the appeal trial on May 4, 2012.

According to the indictment, Cuong, along with his son, Nguyen Ngoc Tuong Thi, and his daughter-in-law, Pham Thi Bich Chi, were accused of creating 3,000 leaflets with anti-state content. Cuong and Thi were arrested on March 28, 2011 when distributing approximately 1,200 leaflets along the National High Way 1A, from the area of Lang Me Hamlet, Xuan Dong Commune, Cam My District, to Tan Bien Ward, Bien Hoa City, Dong Nai Province. Under the same accusation, Nguyen Ngoc Tuong Thi was handed an 18-month conviction while Pham Thi Bich Chi received an 18-month suspended sentence, as she was pregnant.

Cuong was finally released on August 1, 2017, eight months earlier than his expected release.