After working in the military, Nguyen Nguyen Binh started translating books. But in 2011, a series of political corruption cases caused her to change paths, and she started joining social movements for political change. She spoke to us about what that means in our latest interview with Vietnamese female activists. Watch it, here!

Daughter of General Nguyen Trong Vinh, the Ambassador of Vietnam to China from 1974-1987, Nguyen Binh was brought to China to study the Chinese language. Her life seemed to go in the right direction at the early phase of General Vinh's ambassador term. But when China changed its policy, Nguyen Trong Vinh saw a lot of difficulty and hostile behaviors from Chinese government while in Beijing. Nguyen Binh was sent to work as radio officer persuading enemy troops to give up their mission. She worked there until 1990 when the radio station was ordered to stop functioning, and she decided to retire from the army. She went back to Hanoi to live with her family and worked as freelance translator.

She has translated 14-15 books so far, including To Live by Yu Hua. Since 2011, her father, General Nguyen Trong Vinh, has been a very active critic of Vietnamese government on the issue of Vietnam's foreign policy towards China. Nguyen Nguyen Binh was the one who helped him to write hundreds of letters to send to the government from 2004 onwards. She also got to know many people in Vietnam's civil society, and together they formed a community which engages in many activities such as visiting people in prison, attending protests, and helping each other against the oppression of the government.

Nguyen Nguyen Binh is active in expressing her opinions about the government’s policies, especially those concerning China. She joined the 2011 protests and was detained for a few hours by the police of Hanoi. She raises her voice through letters, which are sometimes sent directly to the leaders of CPV, or posted on the Internet. In her letters, she often urges the Vietnamese government to follow the examples of Western countries and to avoid partnering with China. She has been very active in visiting and helping political prisoners and activists at risk.

Nguyen Nguyen Binh lives with her husband and her father, General Nguyen Trong Vinh. Her father is very old, and she cares for him.

On July 12, 2019, Nguyen Nguyen Binh and 19 family members and supporters of political prisoners were physically attacked by thugs who they believed to be plain-clothes prison officers and public security officers. Activist Trinh Ba Phuong, son of former political prisoner Can Thi Theu, told VOA Vietnamese that the group was on its way to Prison No. 6 with some posters solely to visit and support prisoners such as Truong Minh Duc, who were on hunger strike at the time. When the visitors group tried to approach Camp 6 by car, a truck seemed to purposely park to block the road, so they decided to walk the rest of the way. This is where the attack took place. Activists Trinh Ba Khiem, Nguyen Thuy Hanh and Huynh Ngoc Chenh were not only physically assaulted, but their belongings, including money, phones, and personal documents were taken by the attackers. 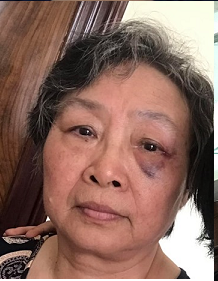