Ha Van Thanh, an environmental activist who was involved in protests after the 2016 Formosa environmental disaster, has been detained and possibly subjected to physical violence in prison in Nghe Anh province, according to his family. Thanh was deported back to Vietnam in October after a months-long journey to the US, where his case for asylum was rejected. His family was not immediately notified of his re-arrival Vietnam and later found out that he had been arrested. According to Radio Free Asia, Thanh's wife was threatened not to share any documents regarding her husband's case and not to communicate with Catholic priest Nguyen Dinh Thuc about the case either. His wife also reported that she saw Thanh confess to human trafficking in a video of a police interrogation, but that the video seemed off. Forced, filmed confessions are not an abnormal occurrence in the one-party state, raising questions about the credibility of the alleged taped confession.

In February 2017, Ha Van Thanh protested injustices after the Formosa environmental disaster. He led marches and offered protections to the protesters and the priests. He was beaten and then watched by the police, and was summoned three times before he decided to flee abroad the avoid the arrests and imprisonment that his fellow protesters, Hoang Duc Binh and Nguyen Nam Phong, had to endure.

Thanh reportedly left the country in May 12 2018, and he spent months going through Laos, Thailand, Cuba, Panama, and Mexico, before walking across the Mexico - US border and applying as an asylum seeker there on July 24, 2018. Unfortunately, after being reviewed, the US denied him refugee status on May 10 2019, and his appeal was also rejected on October 21 2019.

Persecution while seeking asylum abroad
May 12, 2018
(map)
US lawmakers

Environmental activist Ha Van Thanh was at risk of deportation back to Vietnam after trying to seek asylum in the US. His court case in the US is the culmination of an attempted asylum process that has taken him to seven different countries, starting in May 2018, after fellow protesters such as Hoang Duc Binh and Nguyen Nam Phong were targeted by authorities in the wake of demonstrations against the Formosa company. Thanh went to court three times in the US, where his application for asylum was rejected and his appeal was denied.

The US rejected Ha Van Thanh's application for asylum and deported him back to Vietnam. Thanh feared arrest for his role in protests following the 2016 Formosa environmental disaster. Many others affiliated with the protests have been harassed or jailed. Despite presenting documents from the Vietnamese authorities requesting him for questioning on the protests and having evidence he'd been beaten by the Vietnamese authorities, Thanh's asylum request was denied.

On June 12, 2019, four US members of congress, Alan Lowenthal (CA-47), Zoe Lofgren (CA-19), Lou Correa (CA-46), and Harley Rouda (CA-48) sent a letter to Chief Immigration Judge, MaryBeth Keller, to ask the judge to consider for another review of the case and for an “urgent approval” of Thanh’s asylum request, given Thanh’s history with local authorities.

On June 14, 2019, the same members of Congres sent a letter to the head of the US Immigration and Customs Enforcement Agency (ICE) to ask the agency "to immediately suspend the deportation of activist Ha Van Thanh." 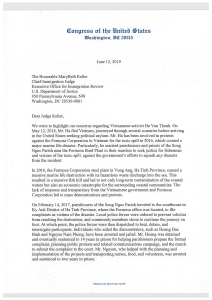 Vietnamese Activist to be Deported From US After Seven-Country Asylum-Seeking Odyssey, Radio Free Asia, June 7, 2019

Trump administration might side with Vietnamese government on fate of protester, OC Register, August 22, 2019

After being deported by the US once his petition for asylum was denied, Ha Van Thanh went through the customs control of Noi Bai international airport, possibly at the end of October 2019, and was quickly detained by public security forces before being escorted back to Nghe An. Thanh, however, was not accused of committing a national security-related crime, but the crime of organising and operating a human smuggling system.

Two months after his arrest, An Ninh Television (literally translated as Security Television), a mouthpiece of the Ministry of Public Security, broadcasted a program where Thanh appeared before the public to “confess” to this smuggling crime. In the program, Thanh admitted that he has helped 41 persons (including children) to illegally migrate to New Zealand in exchange for US$1,000 per person. He also mentioned that all of them were arrested in Indonesia and deported back to Vietnam. Many, however, believe that this is an opportunistic move of Nghe An public security to use the death of 39 Vietnamese in the lorry in Essex, UK-- which has attracted international attention-- to justify their crackdown.

According to Mr Le Thanh Tung, a contact point in Vietnam for Thanh while he was abroad, Thanh’s family was repeatedly harassed and watched to gain more information about Thanh. Priest JB Nguyen Dinh Thuc also told to Voice of America and other international media outlets that Thanh was beaten and tortured in prison. Moreover, the interrogation and detention process happened without any attorney present to protect Thanh’s legitimate rights and interests. His family has also reported that Thanh was detained and possibly subjected to physical violence in prison in Nghe Anh province.

Thanh's family was not immediately notified of his re-arrival Vietnam and only later found out that he had been arrested. According to Radio Free Asia, Thanh’s wife was threatened not to share any documents regarding her husband’s case and not to communicate with priest Nguyen Dinh Thuc about the case either. His wife also reported that she saw Thanh's alleged video confession, but that the video seemed off. Forced, filmed confessions are not an abnormal occurrence in the one-party state, raising questions about the credibility of the alleged taped confession.

Four members of the US Congress this week wrote a letter to US Secretary of State Mike Pompeo asking for him to press for the release of Ha Van Thanh. He was detained upon re-entry into Vietnam and is awaiting trial, charged with human trafficking in what many believe to be a politically-motivated charge.