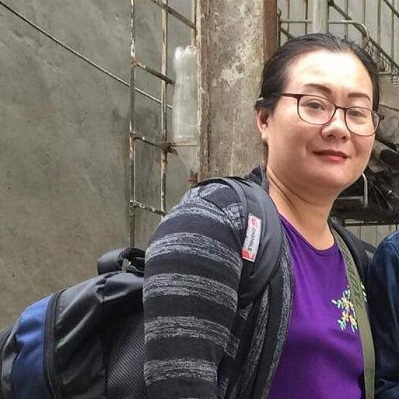 Tran Thu Nguyet is an outspoken human rights activist. She has participated in almost all demonstrations on anti-China issues and environmental protection, attended the hearings of dissidents, and protected their families.

In 2016, Nguyet was illegally detained for three days by Ho Chi Minh city’s police because of her participation in a demonstration against the Formosa environmental disaster.

She was also assaulted many times while participating in protests.

On November 30, 2017, she was beaten and detained for several hours when protesting the ten-year appellate judgment against Nguyen Ngoc Nhu Quynh.

Despite being offered to relocate to the United States, she decided to stay in Vietnam and continue fighting for human rights.

Nguyen Dinh Thuc is a Catholic priest who spoke out the Formosa environmental disaster and helped victims of the toxic waste spill to fight for compensation. Tran Thu Nguyet was also surveilled and detained several times by police because of her participation in many non-violent demonstrations on this issue and anti-China protests.

On April 22, as soon as she landed at Vinh airport to attend Thuc’s mother’s funeral, police confiscated her phone and took her to a local station. After being detained for two hours, she was deported back to Ho Chi Minh City without attending the funeral.