Defend the Defenders has noted that the Vietnamese government is changing charges against political activists to crimes like “procuring prostitutes” in order to make them easier to extradite and prosecute. The tactic is apparently being used with the aim to make processes like applying for asylum claims and garnering local and international support for their cases more difficult for the activists. This is especially relevant in the cases of activists who have fled abroad fearing arrest who may now be more easily deported back to the country under the new charges. “This criminalization of political activities will put political activists in a difficult situation,” Trang Van Nguyen, a member of the Brotherhood for Democracy, told Radio Free Asia. RFA reports that Nguyen was “formerly charged with ‘activities aimed at overthrowing the people’s administration’ but now [is] accused of procuring prostitutes.”

Nguyen Van Trang is living in Thanh Hoa province. He is a student of Hong Duc University.

Nguyen Van Trang is a member of the Brotherhood for Democracy, in charge of its activities Thanh Hoa province and nearby areas.

On November 27, Nguyen Van Trang was prosecuted by investigation security agency of Thanh Hoa province. Because of his absence at his residence, the police of Thanh Hoa province released a wanted notice on December 5, accusing him of “conducting activities aimed at overthrowing the people’s administration."

On December 10, security forces of Thanh Hoa Province read the wanted notice, dated December 5, to Nguyen Van Trang's family members and friends. Trang was prosecuted under the charge of “conducting activities aimed at overthrowing the people’s administration," Article 109 of the 2015 Penal Code. 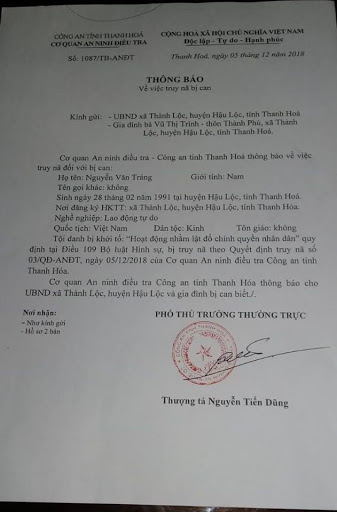 Allegations against Many Activists Suddenly Changed from Political to Criminal, Defend the Defenders, December 22, 2019