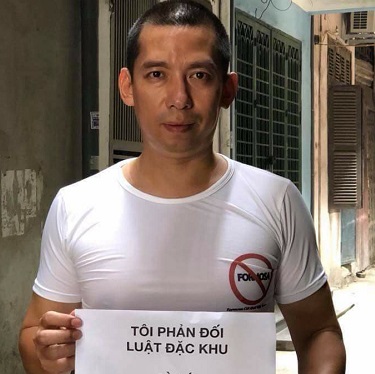 His hometown is Nam Dinh province. He used to work as Director General of Liva Company, which specializes in technology and software.

Since 2011, Dung has participated in many protests and demonstrations on national sovereignty issues. He is currently the captain of a No-U football club in the North, which was established by participants in 2011 after the demonstrations protesting against the Nine Dash Lines claim of China. Because of his activism, he is often harassed.

He then admitted his identity as a public security officer, but forbid Dung from recording him. When Dung questioned the legal basis of the prohibition, he was not able to show any documents. He simply claimed that he was on duty and under the command of his unit heads. They entered into a fight, and the security officer slapped Dung’s mother during the conflict, according to his video.