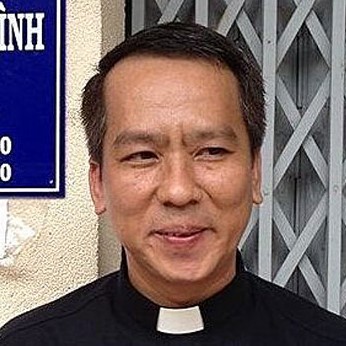 Father Nguyen Duy Tan is a priest of Tho Hoa parish in Dong Nai province.

Father Tan has been active in the promotion of freedom of religion and human rights in Vietnam for many years and often advocates for the rights of his parishioners and members of his community. He spoke out to support peaceful protesters demonstrating in national protests in June 2018 and supported dissident writer Pham Doan Trang after the release of her new book, “Politics for the Masses” in 2018. On June 19, 2018, Father Tan also protested in front of Bien Hoa prison north of Ho Chi Minh City, demanding the release of one of his parishioners, Pham Ngoc Hanh. Hanh, a mother of five, was detained after protesting in the nationwide demonstrations in June. Due to his activism and criticism of the government, he has often been targeting by authorities and even assailants backing the government. In 2017, pro-government vigilantes attacked Nguyen Duy Tan and members of his community at their church.

June 11, 2018: prohibited from travelling to Malaysia with other priests

Father Tan was barred from leaving Vietnam to travel to Malaysia with a group of other priests. Security officers detained him because the Public Security Department of Dong Nai province had not approved the travel. He was the only priest denied departure. The month prior, Father Tan had participated in a meeting on religious freedom violations with EU representatives in Ho Chi Minh City.

Public security officers from Thong Nhat district, Dong Nai province summoned Father Nguyen Duy Tan for questioning about his online posts. Father Tan is an outspoken Catholic activist and known for posting online about human rights violations and the maritime conflict in the South China Sea. He had also been questioned on August 3.