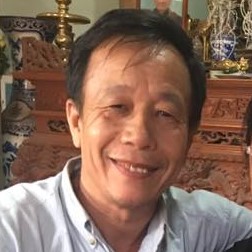 Do Cong Duong has died in prison. Duong was arrested in 2018 and sentenced to eight years in prison on two separate charges of “disturbing the peace” and “abusing democratic freedoms” for his work with land grab victims in Bac Giang Commune. His family had been complaining to the prison authorities for years about his failing health. According to a Facebook post, Duong passed away in Nghe An Hospital at 10:20 p.m. on August 2; the cause of his death has not been made public. This is the fourth death of a political prisoner in prison in recent years; the others were Dao Quang Thuc, Doan Dinh Nam, and Huynh Huu Dat.

About 30 families of political prisoners in Vietnam are calling on the government to allow sick inmates to receive adequate healthcare after two inmates, including Duong died, they said, from lack of timely care. Read our translation of the impassioned letter, here.

The Committee to Protect Journalists issued a statement regarding the Do Cong Duong's death. The statement noted that Duong was healthy before he went to prison.

On September 26, 2017, the investigation police of Bac Ninh police sent Do Cong Duong a warning notice that reads:" [On his Facebook accounts], Mr. Do Cong Duong has posted, share articles, live videos with content that distorts the truth, impacts upon the credibility and reputation of other citizens and organizations; some videos that Mr. Do Cong Duong shared and propagated have content that contradicts the directions and policies of the Party and the law of the state."

Police called for the two teenage daughters of Do Cuong Duong to come into the local station to discuss their father's case. The family has faced harassment over the years due to Duong's land rights and anti-corruption activism.

Duong's family has been in a difficult situation, as he used to be the main provider for the family.

“Healthcare is a Human Right, Too:” Translation of An Open Letter from Families of Vietnamese Political Prisoners, The 88 Project, August 14, 2022

Do Cong Duong was prosecuted with two separate charges, in two separate proceedings.This record reflects the prosecution initiated by the Bac Ninh province police, in which Duong was charged with "abusing democratic freedoms" under Art. 331 of the 2015 Criminal Court.

On October 12, the People’s Court of Bac Ninh province sentenced Duong to five years in prison on charges of “abusing democratic freedoms” under Article 331 of the 2015 Criminal Code. His family was barred from entering the courtroom.

On January 23, 2019, his sentence of five years for "abusing democratic freedoms" was reduced to four years on appeal. The appeal of his other four-year sentence has already been denied.

He will have to serve eight years in prison in total.

The daughter of Do Cong Duong revealed that several cadres whom her father had exposed as corrupt had been arrested. However, it’s not clear if Duong’s case will be reviewed by the court.

After the first meeting with Do Cong Duong on April 5, 2018, lawyer Ha Huy Son shared that Duong was not in good health.

The Committee to Protect Journalists condemned the sentence against Duong. 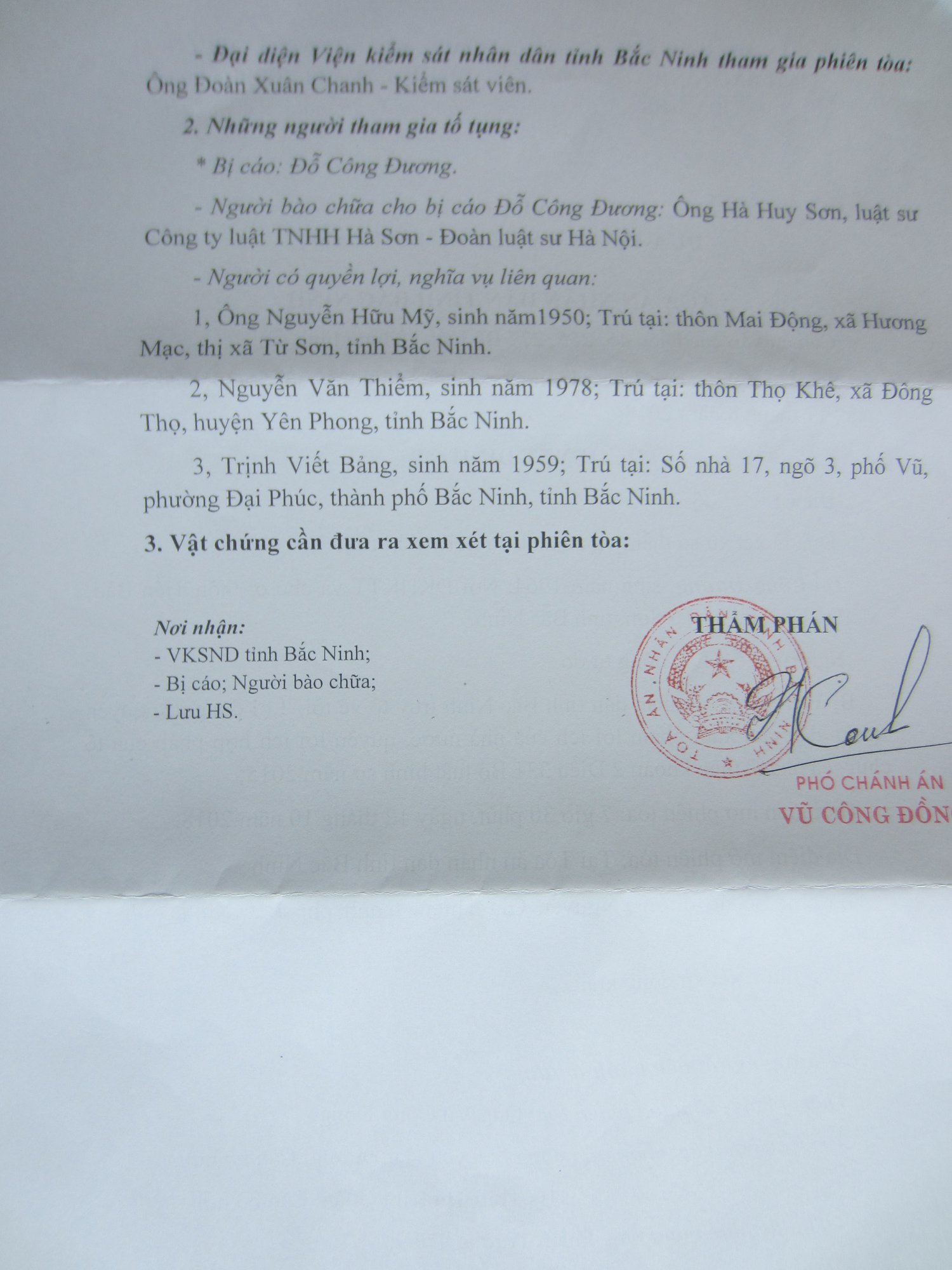 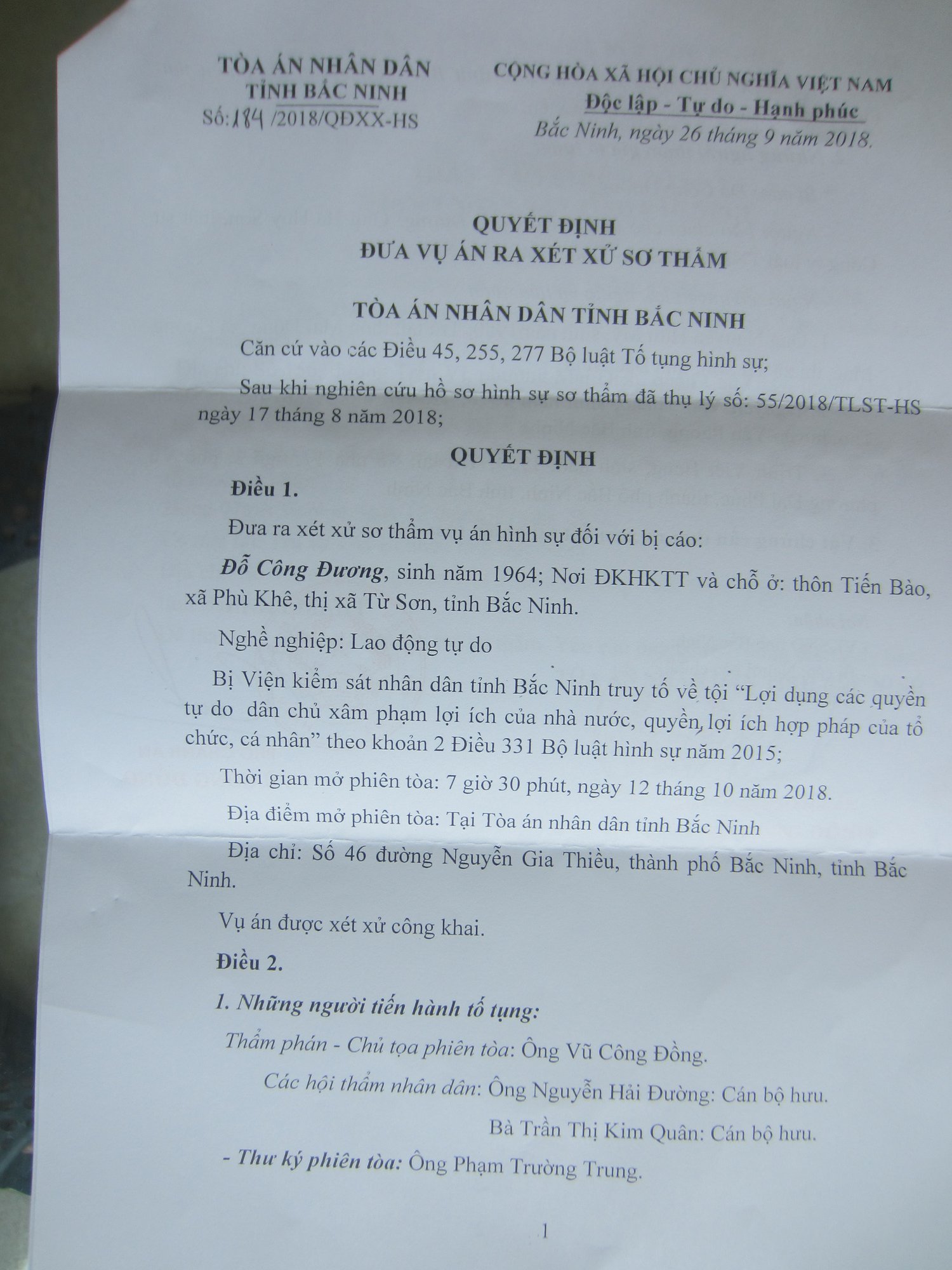 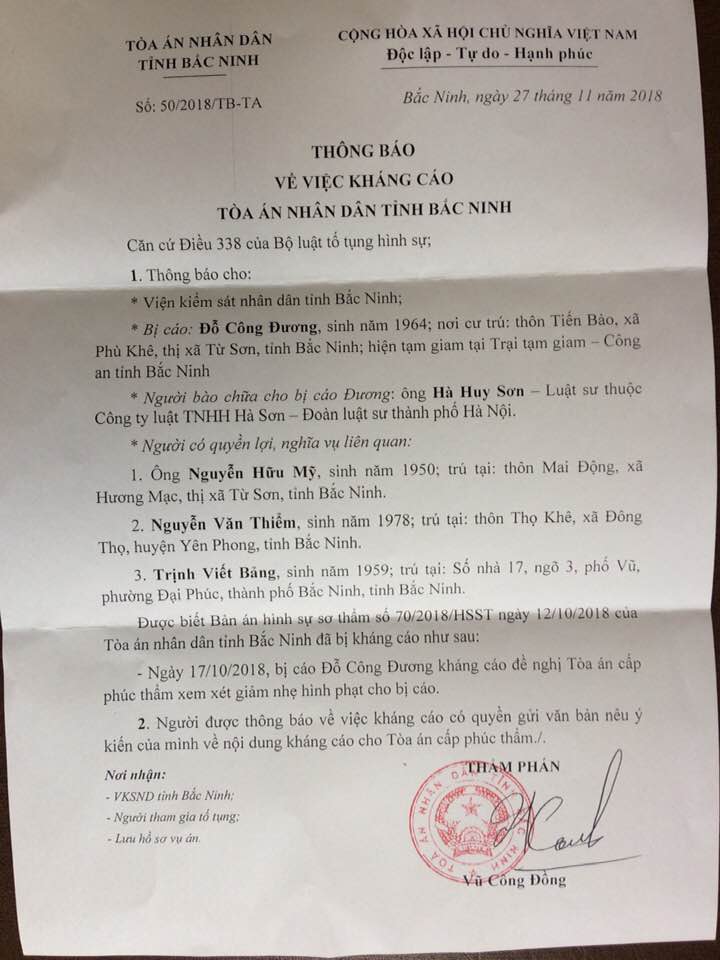 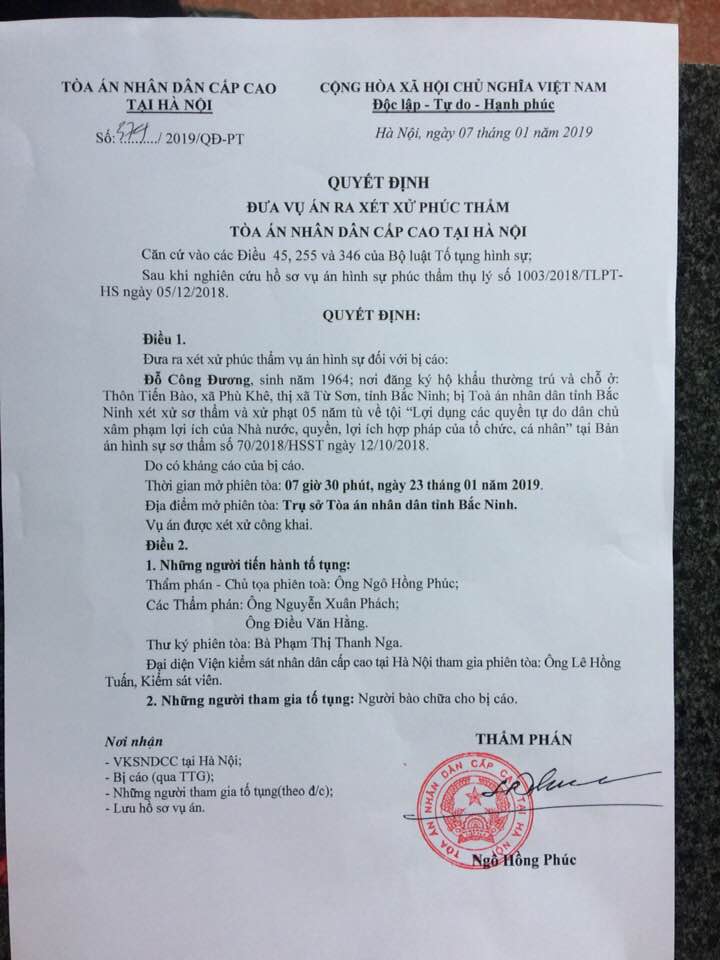 He met with his lawyer, Ha Huy Son, for the first time on April 5, 2018. According to lawyer Ha Huy Son, Duong was charged with "disturbing public order" under Art. 318 of the 2015 Criminal Code.

Do Cong Duong was prosecuted with two separate charges, in two separate proceedings.This record reflects the prosecution initiated by the Tu Son commune police, in which Duong was charged with "disturbing public order" under Art. 318 of the 2015 Criminal Court.

On September 17, 2018, a court’s first instance trial was carried out from 7:30 to 14:00. The four defendants were Do Cong Duong, Le Thi Thanh Nga, Nguyen Van Vui and Nguyen Van Trung, all prosecuted for “disturbing public order” under Article 318 of the 2015 Criminal Code.

Except for Mr. Duong, the three left, Nga, Vui and Trung, admitted the accusations from the trial panel and were sentenced to  3 years, 2 years 6 months and 2 years 4 months, respectively. Meanwhile, Duong was sentenced to four years, the heaviest judgment.

Ha Huy Son, Duong’s defense counsel, claimed his innocence and argued that his behavior was just to take photos and observe the land acquisition by authorities. There was no evidence from the investigation agency to prove that Mr. Duong opposed the person on duty or abetted anyone, even though they had accused him of “disturbing public order”. Therefore, the court’s decision on Mr. Duong is wrong.

Do Cong Duong's appeal of his four-year sentence was denied on November 21. The People’s Court of Bac Ninh upheld the sentence for "disturbing public order" for filming a forced eviction in Bac Ninh Province and posting anti-corruption articles and commentary online.

After the first meeting with Do Cong Duong on April 5, 2018, lawyer Ha Huy Son shared that Duong was not in good health.

The Committee to Protect Journalists condemned the sentence against Duong. 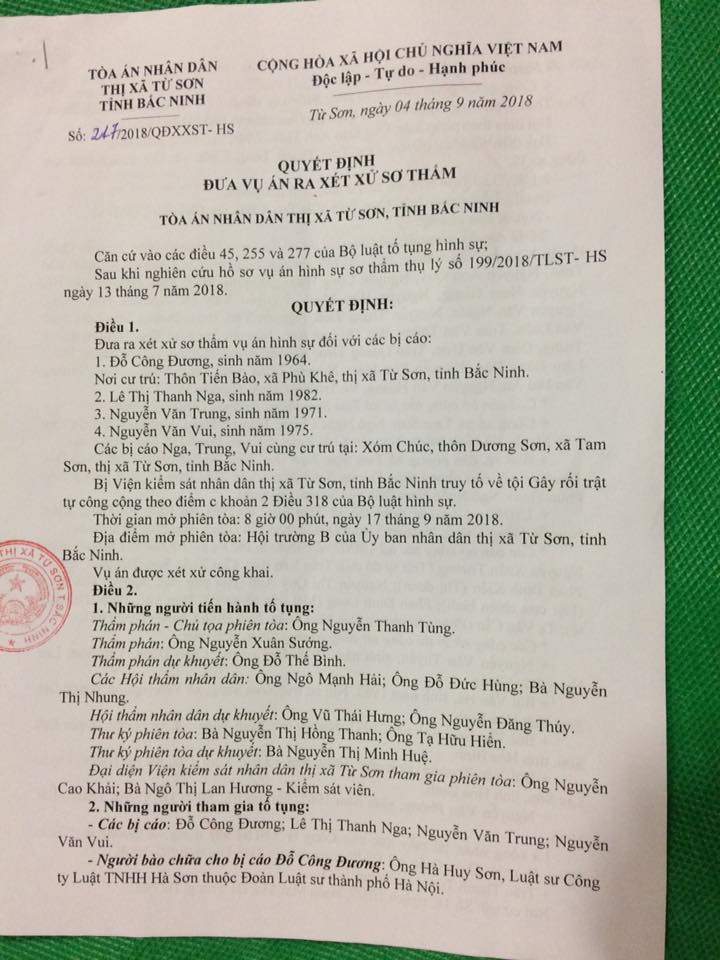 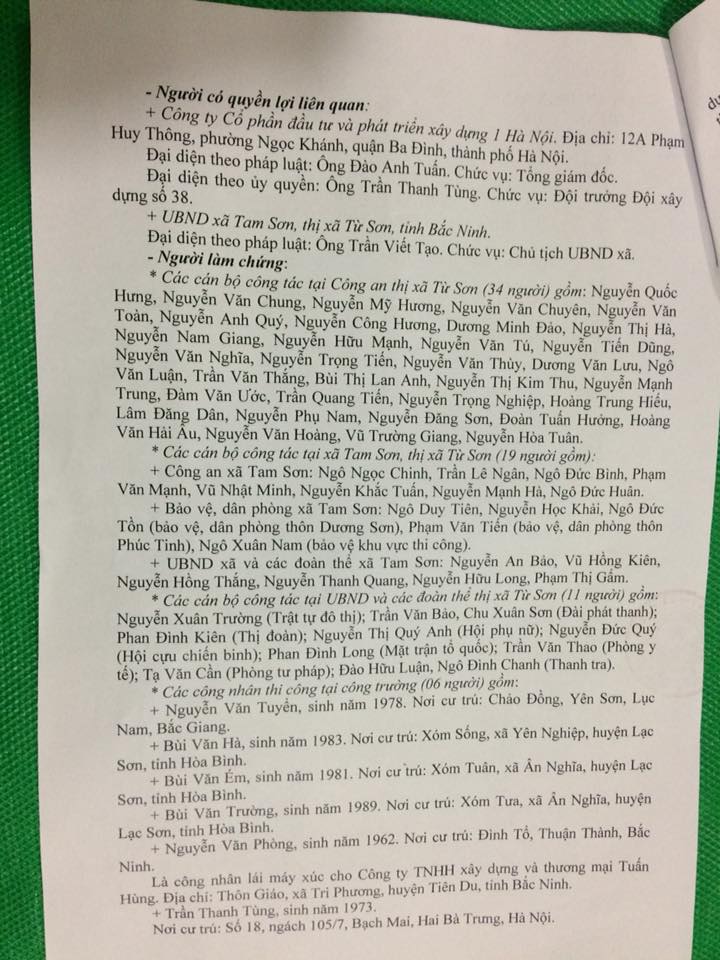 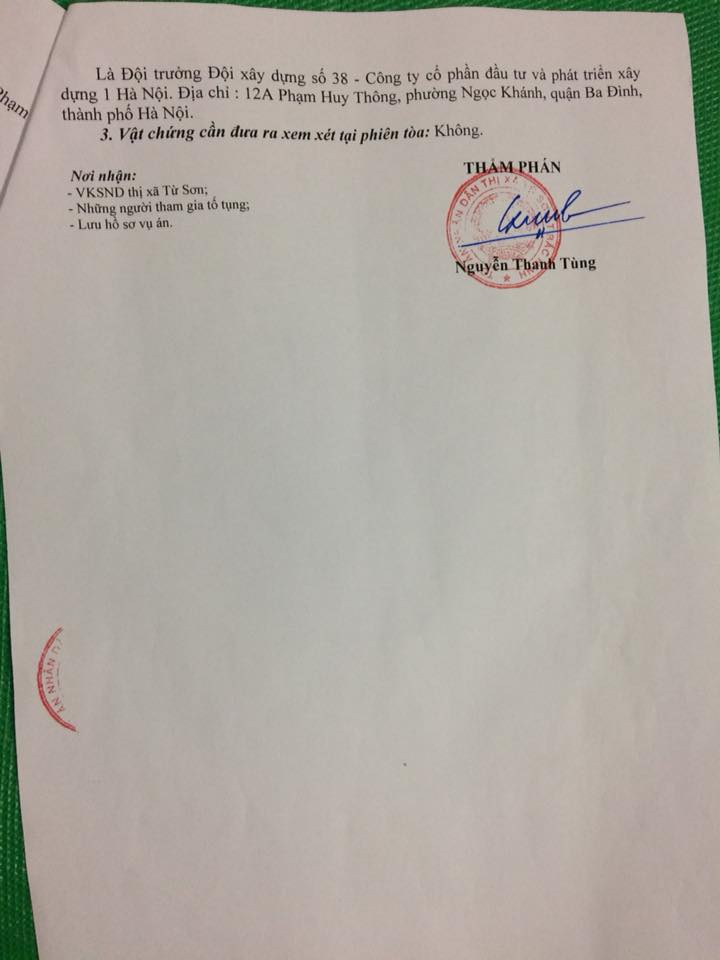 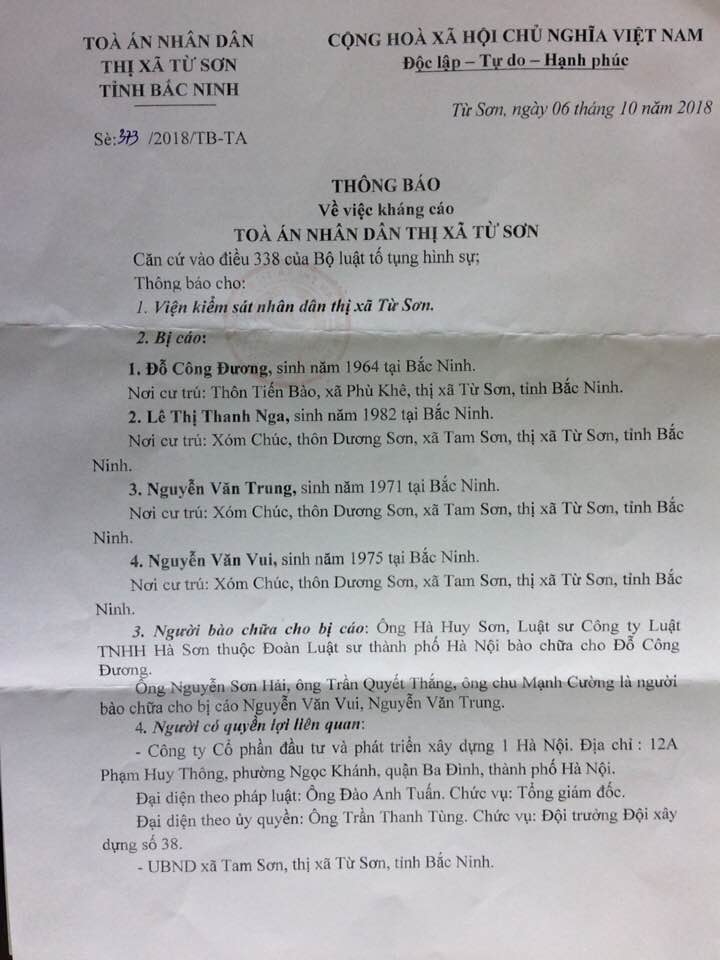 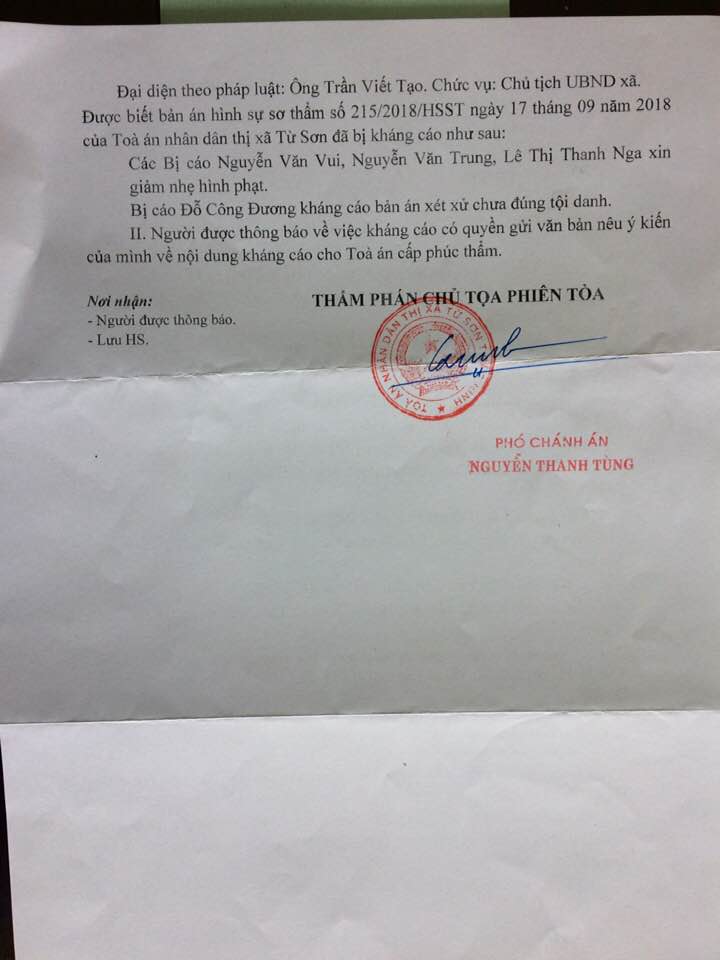